You might think that FAA airworthiness, inspection and record-keeping requirements virtually guarantee that any airplane you buy is going to be in superb condition. Think again: There’s a need to put serious effort into your own investigation or hire your own trusted mechanic to travel to the seller’s location. Even if the seller is a scrupulous individual, there could be expensive problems lurking that can be detected only by extensive expert examination. Even when you can rely on a warranty, it’s preferable to discover discrepancies before they bite you. Complicating matters is that detecting an unscrupulous seller can itself be a challenge. When you begin to fly your purchase, you’re entitled to the peace of mind that comes from knowing you did everything you could to diminish chances of ending up in the NTSB’s accident files.

Taylorcraft
The flight instructor and the commercial pilot/owner had traveled to Maryland to inspect and pick up the newly purchased Taylorcraft 15A, and fly it back to Jack Barstow Airport, Midland, Mich. The commercial pilot wasn’t current in the airplane and asked the flight instructor to accompany him and provide instruction en route. As part of the presale agreement, the seller hired a mechanic to perform an airworthiness inspection of the airplane, which included an engine compression check and airframe fabric test. The mechanic endorsed the airplane’s logbook for day/VFR flight only. The flight to Michigan was being conducted under an FAA ferry permit, which does not permit carrying passengers. For both the pilot and instructor to be on board, they would have to be required crewmembers.

The day before the accident, the flight instructor flew the airplane and questioned its slow climb rate. The seller said that the airplane, “was not a great performer,” and a normal-climb airspeed was between 60 and 70 mph. He said it should cruise between 95 and 100 mph. The instructor reviewed the logbooks and noted that the airplane had not received annual inspections in the previous three years.

On the day of the accident, they flew to their first intended fueling stop, Somerset, Pa. The indicated cruise airspeed was lower than expected. After landing, the airplane was filled with fuel and prepared for the next leg of the flight. After takeoff, the airplane had a minimal climb rate and only got to about 200 feet AGL before it started to descend. The instructor took the controls and maneuvered to avoid obstacles. The airplane struck 40-foot power lines and crashed. Both occupants escaped injury.

Examination of the engine revealed low compression on the #3 cylinder, and no compression on the #5 cylinder. The air filter was found clogged with debris, and when the throttle was placed in the full-forward position, the carburetor butterfly valve only opened about one-third of the way.

The NTSB determined that the probable cause of this accident was the mechanic’s failure to discover several mechanical deficiencies during a prebuy inspection, which either independently or collectively resulted in a subsequent engine failure. A factor was the power lines in the forced landing area.

Champion 7KCAB
The airplane was landing at Alexander City, Ala., with the new owner and another pilot on board. The new owner didn’t have any time in the make and model, so the other occupant was piloting. The airplane had a prebuy inspection conducted two days before the accident, and no problems were found. In addition, the pilot conducted a preflight inspection before the accident flight. The pilot and the owner departed on runway 36 and remained in a left-closed traffic pattern. The pilot made a three-point landing in the first 1,000 feet of the runway, and was on the landing rollout when the tailwheel started to shimmy. He applied forward pressure on the control stick and raised the tailwheel off the runway. The shimmy stopped, and the pilot applied aft pressure on the control stick and lowered the tailwheel onto the runway. The airplane immediately veered to the right. The pilot applied left brake and rudder, but the airplane went off the right side of the runway and into a ditch. The right main landing gear separated and the right wing received structural damage. The occupants were uninjured.

Examination of the airplane revealed the right spring on the tailwheel control had separated from the rudder and the tailwheel attachment. The tailwheel spring was found about 20 feet off the right side of the runway. The previous owner stated that he informed the new owner of the tendency for the tailwheel to shimmy during the three-point landings.

The NTSB determined that the probable cause of this accident was the separation of the right tailwheel spring on landing rollout for undetermined reasons, resulting in a loss of directional control and collision with a ditch.

The airplane had been purchased recently from an aircraft broker. The purpose of the flight was for the new owners to take the airplane home to Little Rock. Soon after departure, the pilot reported that the airplane had an electrical problem and needed to return to the airport to land.

The accident pilot later told investigators that he conducted the preflight inspection of the aircraft, noticed no problems, and that all fluid levels were “okay.” He added that after “six to eight minutes into the flight, at approximately 4,000 feet, the entire panel flickered and then went blank.” The pilot cycled the master switch and turned back toward the airport. He reported that he began pumping the gear down manually. He then had the passenger continue to pump the gear into the down position. The pilot said that he had the runway in sight as he turned onto final approach. The pilot added that he never saw the power poles with the wires before impact.

The aircraft had received a prepurchase inspection before the buyer/pilot accepted the aircraft. Several discrepancies were noted, but not the one that investigators said was responsible for the loss of electrical power. An examination at the accident site showed that the main lead wire to the alternator had separated from the alternator. The alternator wire and the insulated terminal end had disconnected with the terminal ring remaining on the alternator. The separated end of the multistrand wire had a “weathered” appearance.

The NTSB determined that the probable cause of this accident was the pilot’s failure to maintain clearance from the power transmission lines. Contributing to the accident were the loss of aircraft electrical power, diverted attention, and the night conditions.

Piper PA-32-300
The single-engine Piper PA-32-300 struck a transmission line and crashed during a night forced landing near Danville, Ark. The commercial pilot and both passengers were killed. The IFR flight was from Adams Field Airport, Little Rock, Ark., to Wiley Post Airport, Oklahoma City, Okla.

The airplane was cruising at 6,000 feet MSL when the pilot radioed ATC he had “a rough-running engine.” The pilot then radioed, “Mayday, going down, on fire.” The flight was cleared for a visual approach to the Danville Municipal Airport. It turned toward the airport, but contact was lost. The following morning, the burned-out wreckage was found 3.6 miles east of the airport.

An examination of the engine was conducted by the NTSB. A large hole was found on top of the engine case between the #4 and #6 cylinders. Evidence consistent with the lack of oil lubrication were noticeable on both the #4 and #6 cylinders. The #5 cylinder was found separated from its mount. The #5 connecting rod cap separated from the connecting rod and wasn’t recovered.

The NTSB determined that the probable cause of this accident was failure of the #5 cylinder that resulted in oil starvation and the subsequent loss of engine power, and the pilot’s inability to see the transmission line during the forced landing.

Factors contributing to the accident were the dark night and the transmission line. 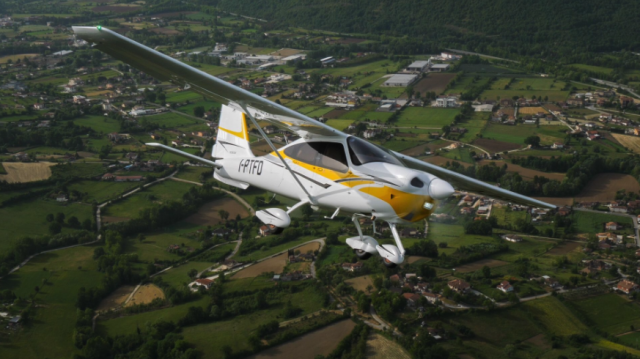