Available on the new Cessna Citation Longitude, the Garmin Head-up Display is an eye-opening product in a number of ways.

At the European Business Aviation Convention and Exhibition (EBACE) in Geneva, Switzerland, Garmin unveiled its first head-up display. The first plane to get the new HuD will be the Cessna Citation Longitude, a super-midsized, long-range jet closing in on certification.

If you’re not intimately familiar with the technology, a head-up display is a system designed to enhance landing safety. As you’re no doubt aware, a HuD projects all the critical aircraft information on a glass lens through which the pilot views the outside world and, hence, the landing environment, including the runway and all of its lights. Such a system allows pilots to keep looking outside the airplane while on approach instead of alternating between looking outside for the runway and looking down to see the flight instruments, which on a HuD are all right in the pilot’s line of vision and focused at infinity, so the pilot doesn’t have to refocus on the display after focusing on the runway.

HuDs make use of external sensors that can see in darkness and through clouds to give the pilot, under most circumstances, an unobstructed view of the runway. Because of all of this, HuDs can lower the landing minimum on a 200-foot DH ILS to 100 feet AGL. A few years ago, I landed a Gulfstream G650 back at Savannah, Georgia, in a rainstorm that sent every other arriving flight packing to an alternate airport. We broke out of the soup and saw the runway lights right at 100 feet and I was able to plant the gear on the aiming point, despite not being able to see the runway until the last few seconds of the approach. There’s been a lot of research on HuDs that show they’re highly effective at helping pilots fly more stable approaches and make more consistent landings, even in broad daylight.

HuDs have been improving in a few important ways in recent years. Perhaps most noteworthy is that sensors are getting better at seeing through different kinds of clouds, haze and smoke. Improved sensors mean that pilots flying an approach behind a HuD get higher-quality information and can fly more accurate approaches. HuDs have also gotten a lot more compact, especially the ceiling-mounted units that project the images onto the glass. Today, more information than ever can be displayed on a HuD, a trend that will likely continue.

No one should be too surprised that Garmin is launching its own line of HuDs. After all, the company’s business philosophy has been, in ideal circumstances, to create entire systems of Garmin-manufactured equipment, instead of coexisting with other products. We should remember that at one point Garmin didn’t make autopilots, terrain awareness gear, flat-panel displays or traffic awareness utilities. HuDs, while arguably the most complex hardware Garmin has yet created, are consistent with the company’s roadmap.

The Garmin Head-up Display will be integrated with its flight decks, starting with the G5000 on the Citation Longitude. It will, says Garmin, have symbology that’s consistent with other Garmin products, so it won’t seem to the pilot that there are two separate systems, but just one integrated Garmin system.

And in yet another ambitious move, Garmin says that it plans to integrate its highly regarded Surface Watch ground operations awareness utility into the Garmin Head-up Display so that pilots will be able to, presumably, keep their eyes outside the cockpit from engine start to engine shutdown.   ~Isabel Goyer

The Coast FL44 Headlamp ($39.95) is a great tool for night flights. It has dual color LED beams, allowing the pilot to switch between white and night-vision-preserving red light. The headlamp also has full, medium and low light options. Its Utility Beam Optic produces a diffused beam for close-up work in the cockpit. The head of the FL44 is hinged to allow you to adjust the direction of the light beam.

The FL44 is impact- and weather-resistant, with an IPX4 (water-resistant) rating, so you can use it to preflight in damp conditions. A reflective strap helps add visibility for walking around on a dark ramp. The headlamp is powered by three AAA batteries. On the lowest power setting, the batteries will last for up to 28 hours. On the highest power setting, they’re good for 3 hours and 45 minutes. The FL44 Headlamp is light, weighing in at just 3 ounces.

Looking for a great keychain or an unusual way to label your flight bag? Check out Plane Tags ($24.95-$84.95). The tags are made from the fuselage of a retired airplane. Thickness, color and markings vary depending on which part of the skin was used, giving each tag its own unique appearance. 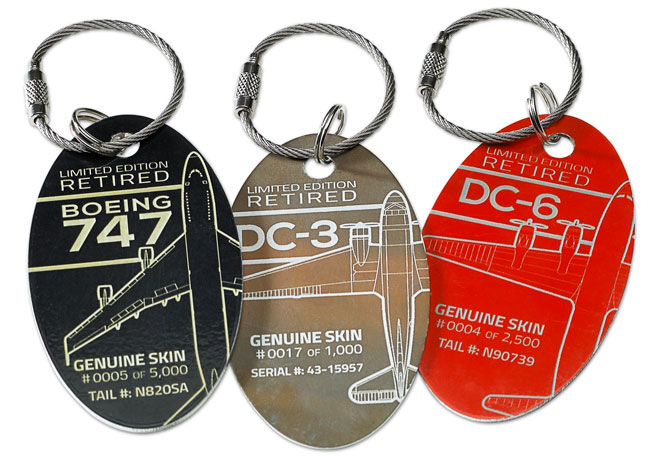 Plane Tags are individually numbered, with a limited amount made from each plane. On the front side, the tag is labeled with the make, model and serial number of the plane it came from. On the back, many of them can be customized with your name, address and phone number.

Plane Tags come from a variety of aircraft, depending on what the company has available. Some current options include a F-86 Sabre, B-52 Stratofortress, Piasecki H-21B and a collection of Boeings and Airbuses. In addition to photos of the individual aircraft, the website includes the history behind each of the planes used to make the tags.