Since it introduced the first model five years ago, the Garmin D2 (for “Direct To”) has been a popular item for the company, and every year or two it comes out with a new model that’s slimmer, better looking and more feature-rich. This year’s D2 watch is up to Charlie (the Bravo was the second iteration, because the D2 name wouldn’t make sense anymore as the “D3,” right?). Anyway, D2 Charlie has a remarkable new feature: radar.

No, there’s not a radar pod you wear on your head to get the weather; the watch interfaces with your smartphone or as a member of Garmin’s connected cockpit, communicating with a number of compatible devices to get METARS, TAFS, NexRad radar and much more. There’s also, as in previous versions of the D2, flight planning, airport info, a flight timer (which is handy for switching fuel tanks), and even a baro-based O2 function that alerts you when you might want to be on supplemental oxygen. There’s much more, of course, including a number of non-aviation-specific functions for when you’re on the road or on the trail.

Cost of the D2 Charlie is $799 for the leather band version and $999 for the Titanium edition. Both come with a rubber quick-change band and lifetime watch data.

Last year when BendixKing announced its KI 300 replacement attitude indicator, a lot of people—including us—loved the things it did. There were also a lot of folks who wanted more.

As background, the KI 300 is a solid-state replacement attitude indicator with a bright display that can take the place of an older mechanical AI while allowing you to upgrade to digital attitude (instead of failure-prone vacuum-powered attitude). The original KI 300, which features a built-in MEMS-based attitude sensor, lacked a few really desirable features, including airspeed, altitude, VSI and flight director capability.

In the current version, BendixKing has added all of those features. The unit is primary for attitude, so you can find a new home for your mechanical attitude indicator. The KI 300 is for reference for airspeed, altitude and VSI, so you’ll need to retain those original mechanical instruments (or some other acceptable primary version of them) in your panel.

The KI 300 starts at $4,995 without the flight director capability. With the command bars, it sells for $5,995. For planes that need a yaw rate gyro, the KI 300 can be upgraded to provide that function as well and replace the airplane’s mechanical yaw rate gyro with a solid-state component.

On top of that, Bendix/King is offering a trade-in offer for your old KI 256 attitude indicator. The bounty: $256. Ha!

Like other units of its type, the Dual Electronics receiver can display its information on a variety of separate devices. The unit is compatible with several electronic flight bag apps on iPad, Android, and Windows devices including AvPlan, FltPln Go and iFlyGPS. It will also work with some non-certified GRT EFIS devices. The XGPS170D can connect with up to two devices simultaneously via Bluetooth.

In addition to its airborne features, the XGPS170D can also act as a navigation device on the ground, though the company points out the obvious, that it probably won’t be able to receive any ADS-B weather (or traffic!) data at ground level. It comes with a non-slip pad designed to reduce vibration, a 12-30V charging adapter and a wall charger. Its lithium-ion battery is rechargeable and will last for up to five hours per charge. Cost for the unit is $599.99. No subscription is required.

Recently certified for all Part 23 aircraft, Approach Aviation’s new FlexAlert Multifunction Annunciator provides a way to group many critical warning and condition annunciations into one display. The unit is compact—3 inches wide and 1.3 inches tall—with the idea that it can be mounted directly in the pilot’s field of view on most panels. It can be configured for either fixed- or retractable-gear and can operate on both 14V and 28V electrical systems.

The FlexAlert Multifunction Annunciator includes alerts for landing gear status, engine, oil and fuel pressure, low fuel, pitot heat, low or over voltage, alternator failure, doors, starter engaged, vacuum failure and autopilot glideslope capture. The LED display is dimmable and the landing gear indicator will work for both land and seaplanes. The annunciator will begin shipping on August 1st at an introductory price of $699.

How does ForeFlight’s thumb-sized ADS-B receiver measure up compared to the competition? We take it on the busiest route in the world to find out!

When I first saw the news that ForeFlight was coming out with a $199 USB thumb-drive-sized ADS-B device I was curious…but not sold. While I liked the idea, I wanted to see how it worked. So I decided to give it the ultimate test drive, taking it into the hornet’s nest that is the Ripon Arrival into KOSH.

I got the little Scout unit the day before I left for AirVenture in my 182. I had ForeFlight already loaded on my large-display iPhone 7 Plus, and the phone made the WiFi connection right off the bat. Scout is tiny, only the size of a largish USB thumb drive, and you can position it anywhere you’d like using the cute little suction cups that come with the unit. I put it on the windscreen out of my line of sight. There’s no battery in the Scout unit, so you need to run a micro USB cable to the bottom of the receiver and then plug it in to some USB port. I had an external USB battery handy, so I plugged Scout into that and just put the battery in the sidewall pocket and forgot about it. It’s a pretty big battery and the Scout draws very little current…I was guessing I had about a week’s worth of charge available, and I’m not kidding. 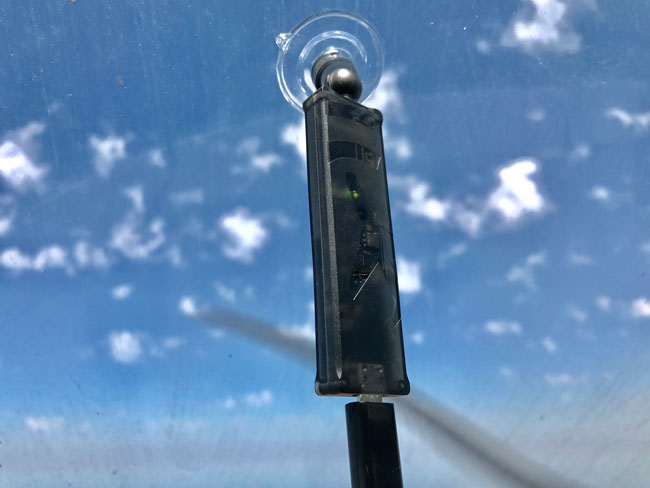 For those of you who haven’t survived the procedure themselves, the Oshkosh arrival from the south funnels roughly four out of every five aircraft arriving at KOSH through a single feeder lane, to RIPON intersection, then to Fisk and then off to one of four runway ends, 36, 18, 27 or 9, depending on which way the wind is blowing. 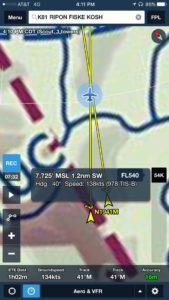 Soon after I took off from San Marcos, where I keep my Skylane, I started picking up returns. In addition to lacking a battery, Scout is also missing a GPS receiver. It’s strictly an ADS-B receiver. There’s no attitude indicator to drive the synthetic vision in ForeFlight, and there’s certainly no Sirius XM Aviation Weather, either. It is a barebones unit. But how useful is it?

Despite its lean design, I found that Scout was great at doing the two things it does do: showing traffic and showing weather. I don’t have a theory for why it is, but Scout was tenacious at locking on to a tower’s signal and not letting go. There’s no display of any kind on Scout, just a power supplied indicator light, so you control it through your device on ForeFlight.

I did run into one problem on a few occasions, one that can happen on any portable ADS-B receiver from any brand but that might rightfully concern pilots: I saw a phantom airplane, at or very close to me in altitude and very close behind me. I guessed and was right that there was no second airplane there—I was talking with ATC the whole time and they never said a word. Not only that, but when I queried them about the return, the controller nicely told me that he only saw my return. Because my plane is not YET equipped with ADS-B Out, I was seeing my plane’s Mode-C return rebroadcast up to me through the TIS-B traffic system and displayed back to me via Scout on my ForeFlight app. One clue to what was going on was that there was no ADS-B information on the aircraft symbol and the plane was never in front of me; its distance behind me was apparently a function of the latency of the system. Still, it was disconcerting. And ForeFlight says that it’s working to cut down on such ghosting issues on the Scout’s software. 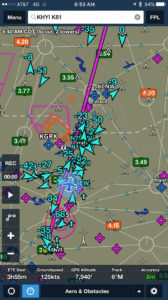 Looking ahead to the Ripon Arrival, even when it was still a hundred miles out, I could see traffic, and lots of it. So thick were the targets as I got closer that it soon dawned on me that I would have to disable traffic in order to see map data, such as waypoint names and geographical features. But Scout was picking up so many targets even in this over-busy environment it was clear that it was up for any challenge.

Weather, while not an issue on my arrival, was still very useful, as the forecast had been for storms. They stayed well east of Lake Michigan as it turned out, so I had great weather for the arrival.

Scout couldn’t help in any way with my dealing with the slow-flight demonstration that the pilot in the Citabria in front of me was putting on. But it did make me grateful that I did indeed have all that traffic information. And if I hope that next time I have a lot less traffic information it’s only because I hope that next time there will be a lot less traffic.