In early May, Garmin introduced a new portable, and if you remember the good old days when a Garmin new portable GPS unit was a revelation, then you know two other things—how far the company has come since then with such portable technology and how much less market there is for such devices with the advent of excellent all-in-one nav apps that play on your tablet or your phone. These apps include the company’s own Garmin Pilot app for the iPad and iPhone, as well as for Android devices. But with the $1,599 aera 760, Garmin might just have hit a sweet spot.

The unit itself is about the largest portable Garmin has produced. At 7 inches diagonally, it’s not as big as an iPad mini, but it’s a good deal more sizable than all but the most comically large phones. The display, says Garmin, is very bright and easily dimmable to a low level. The battery life, at four hours with a lot of backlight and a lot more with it dimmed down, is workable for most flights, though we’d keep it plugged in. It charges via a USB C jack, so charging will be fast, and it boasts built-in Wi-Fi, which seems basic these days given the ubiquitous nature of Wi-Fi devices, but as far as aviation portables are concerned, it’s a relatively recent advance.

The newest aera can do everything you’d expect it to and then a lot more. It has 3D synthetic vision that can be hooked up to a source of attitude information to back up its built-in GPS-derived data or hooked up to a compatible Garmin attitude source. There’s a plethora of charts, of course, including instrument procedures—a number of different database packages are available for it—and for pilots who fly into previously unknown airports regularly, its SafeTaxi utility, with a rich database of airport ground features, could well be worth the cost of admission. Also available are terrain awareness, traffic (when connected to a compatible Garmin ADS-B receiver), including Garmin’s TargetTrend and TerminalTraffic utilities, and weather, both FIS-B and from SiriusXM, when connected to a compatible Garmin receiver. There’s fuel price info (which will pay for the price of the databases if not the unit itself) and more.

And seemingly like all of Garmin’s products these days, the 760 can be connected to compatible Garmin products, like navigators, though a serial or wireless connection, and it features the company’s Connext wireless transfer and data-sharing capabilities. The aera 760 can even be connected to a compatible Garmin autopilot to drive VFR procedures, including vertical nav.

So the question is, what can the aera 760 do that an iPad can’t? Well, as you just read, a lot. And because it’s ruggedized for the cockpit environment, optimized for pilot use—its user interface makes use of standard Garmin symbology—and made to work specifically with existing Garmin avionics that might already be in your panel, it has a number of features that no iPad will ever have.

Will this be enough to drive strong sales of this latest Garmin aviation portable? We’re guessing it will. 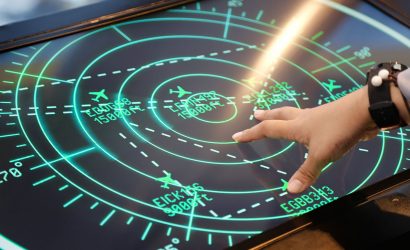