For instrument flight, the glass panels that are increasingly common in today’s general aviation fleet may be a huge improvement over old-fashioned round “steam gauges”—but if the weather closes in, you’re still depending on instruments to provide an artificial substitute for a view of the terrain and runway environment. The primary flight display (PFD) in a typical glass panel combines the functions of yesterday’s attitude indicator, airspeed indicator, altimeter and course/deviation indicator on a single screen. To get an idea of the outside terrain and runway environment, however, you have to look at a separate multi-function display (MFD) with a moving map…unless you’re lucky enough to fly with the equipment covered in this article.

The four vendors profiled here offer a feature that’s as big a jump above the typical glass cockpit as glass was over steam gauges: computer-generated synthetic vision, which puts a GPS-based view of the terrain and runway environment directly on the PFD. With this equipment, regardless of how bad the weather is, you can fly the airplane with what amounts to a perfect CAVU day presented on the screen in front of you. In most cases, this can be combined with Highway In The Sky (HITS), which gives a visual presentation of your desired flight path in the form of periodic “skyway boxes” or other symbols; fly through the boxes, and you’re on track to complete your approach.

Any pilot who’s ever flown on instruments in the vicinity of mountains will understand the extra margin of safety and confidence this provides: Instead of guessing where you are in relation to the runway and terrain, you can see your position clearly on the display in front of you. For the first time, an instrument approach can be accomplished with the same ease and confidence as a visual approach.

How is this magic accomplished? Basically, by using the same technology that makes realistic flight simulation possible with a desktop computer. All the systems covered here use a GPS to provide aircraft location and track information. This data is combined with attitude info from an air data computer, and a terrain and runway database, from which a model of the environment around you is generated. An image of the computed terrain is then presented on the PFD, replacing the simple blue-over-brown display that would otherwise be shown.

With that background information, let’s consider what our four vendors are offering: Chelton Flight Systems offers the FlightLogic Electronic Flight Information System (EFIS), which is STC’d for installation on some 740 fixed-wing aircraft and helicopters. Nick Cain, Chelton’s chief pilot calls FlightLogic’s synthetic vision feature “a huge enhancement to safety, although it’s really just a 90-degree rotation of the overhead view we’ve had for some time on MFDs.” He also says that Chelton’s 6.25-inch display size was no accident, since it makes the system adaptable to the widest possible range of aircraft. Cain pointed out a neat feature of Chelton’s system: skyway boxes every 2,000 feet that offer a stabilized approach to “just about anything you care to define.” Some users have set up custom approaches with an eight-degree glideslope for helicopters. One misconception that comes up is the assumption that the position of the last skyway box on an approach coincides with instrument minimums. Not so, says Cain: “It’s just a function of the computer deciding there’s not enough space to generate another box between the present position and the runway.” Cain also said that Chelton has a new release coming soon that will include WSI weather and traffic on the MFD.
Advertisement

FlightLogic hardware includes two or more integrated display units (which can be configured for either PFD or MFD functionality), an attitude heading reference system, and an air data computer with fuel flow sensor, GPS receiver and antenna. Typical two-display systems weigh under 18 pounds and require less than 5 amps electrical power. More than 1,000 FlightLogic systems have been installed in aircraft today, according to Chelton’s Bruce Bunevich. A recent price reduction brought the list price for a two-screen (PFD/MFD) system suitable for Part 23, Class 1 and 2 aircraft (“pretty much anything below 12,500 pounds gross weight,” according to Bunevich) to $62,800. With installation (which typically requires more than 100 shop hours, since the old instruments have to be removed and a completely new panel fabricated), Bunevich believes the total cost, in most cases, should be “well under $100,000.” For larger Class 3 and 4 commuter aircraft, where a three- or four-screen display system is typically required with separate PFDs for the pilot and first officer, the cost should be around $20,000 higher. For more info, browse www.cheltonflightsystems.com, or call (208) 389-9959.

Op Technologies offers a single-display EFIS with synthetic vision on experimental aircraft; at this writing, it expects to announce its first certificated system, STC’d as a retrofit to the Cirrus SR22. Pricing for the new Pegasus EFIS wasn’t available, but Op Technologies’ Sally Vesley said it would be “very competitive” with systems from other vendors. Besides synthetic vision, Pegasus features include integration with Becker and Garmin SL30 and GTX330 navcoms, dedicated OBS dial and navcom buttons, and an adaptor to accept input from a forward-looking infrared (FLIR) camera. Unlike other vendors, Op Tech offers both PFD and MFD functions on a single display (multiscreen installations are also supported). A unique vertical and lateral approach view animates the position of the aircraft on both the glideslope and plan view of an electronic approach plate. Specifications for the Pegasus system weren’t available at this writing, but were expected to be similar to the company’s existing integrated system for experimental aircraft, which involves one or two displays, single or dual (redundant) attitude/heading reference systems and air data computers, and standard engine indication and crew alerting system. Two display sizes are available: 8.4 inches and 10.4 inches . Single-display systems weigh 10.2 pounds or less and draw 62 to 70 watts of electrical power. According to Vesley, the company has, so far, installed synthetic vision systems in more than 150 experimental aircraft. For details, browse www.optechnologies.com, or call (503) 690-0800. 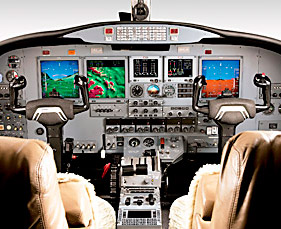 Universal Avionics offers Vision-1, a TSO’d synthetic vision system that’s legal for IFR use. It offers both an exocentric (or “wingman”) view, in which the display is from a virtual camera above, behind and to the right of the aircraft, and an egocentric view, which gives the pilot a virtual view directly out the front of the airplane.
Advertisement

According to Universal Avionics’ Dan Reida, getting FAA approval “required flying dozens of FAA officials all over the country.” Vision-1 is now certified for Part 23 and 25 aircraft, including the Pilatus PC-12 turbine single, and Reida says the company is also looking into a custom system for a TBM 700. Installing a system involves extensive modifications, according to Reida. This includes replacing the existing EFIS, and adding to MCU line-replaceable “black box” units. The system usually works with the IFR GPS already installed in the aircraft. Vision-1 is STC’d on the Cessna Citation 501 and multiple models of Beech King Airs. According to Reida, the two-display system for aircraft such as the Pilatus PC-12 runs about $240K, installed. Reida expects systems like Vision-1 to move into less-expensive airplanes in the future, though he says, “Piston singles could be a stretch. What’s needed is standardization on the interface between the display and the black box. Today, the interfaces are vendor-specific.” System weight and electrical power requirements vary depending on the specific installation. For details, browse www.universalavionics.com, or call (520) 295-2300.

Mercury Computer Systems has taken a slightly different approach with its VistaNav system—it offers synthetic vision capabilities on a portable device, specifically a tablet PC running Microsoft Windows XP and configured as an EFB, with functions including GPS/WAAS moving-map navigation, satellite-based weather, terrain awareness and digital approach plates. In addition to the display hardware, VistaNav requires input from a proprietary inertial navigation unit (INU), a WAAS-enabled GPS, and optionally from an XM Satellite Weather radio receiver and Zaon XRX portable traffic detector. Display options include both Class I and Class II EFBs (the latter, certified for use in commercial aircraft, offers 30 fps frame rates for “a truly lifelike synthetic view,” along with a sunlight-readable display, according to Mercury’s Jeff Simon). The latest revision of VistaNav’s software offers the ability to see the aircraft position on airport diagrams, “Touch-n-Drag” map and chart panning, and long-range weather zoom. Simon is particularly proud of a new feature that offers HITS guidance on nonprecision approaches: “Flying a nonprecision approach on HITS is even more critical than using HITS for precision approaches because you can now see exactly how to prepare for landing transitions to nonaligned runways.”

Because it’s hosted on a portable device, VistaNav can’t be TSO’d for use as a primary navigation device in IFR conditions—and thus, unlike the other systems covered here, it doesn’t replace conventional instruments. It is, however, legal to use portable devices to provide “situational awareness” on Part 91 flights, provided you tune the built-in instrumentation that’s appropriate for the approach being flown. Typical systems weigh less than five pounds. Pricing for VistaNav starts at $4,399 for Class I systems, and $5,999 for Class II systems. For more information, browse www.vistanav.com, or call (866) 627-1671.