You want to file a WHAT?”

Filing a VFR flight plan is a rare occurrence nowadays, in a time dominated by magenta course lines, radar flight following and briefing apps. When we speak of “filing,” it’s generally to seek an IFR clearance and, in truth, a lot of us would never venture out of the traffic pattern without filing IFR. Nevertheless, there’s still a whole lot of VFR cross-country flying being done, and for that reason, we need to discuss the whys and wherefores of filing under VFR, which involves checking in with something called “flight service” after departure.

Perhaps it would be appropriate to refresh our young readership about the topic of a flight plan’s importance for VFR flying. The original (and still valid) purpose of filing such a statement of intentions was for search-and-rescue assistance. There was a time when airports, weather reporting and air/ground communications were not as prevalent and accessible as they are today. When an airplane left the ground, there was always a likelihood that it wouldn’t be heard from again. By letting someone know your destination and time of expected arrival, there was an added chance that someone would come looking for you.

SOME DATA ON HOW MANY FLIGHTS HAVE GONE MISSING IN THE U.S. OVER THE PAST HOW MANY EVER YEARS OR SUCH

According to a 2017 story by Owen Amos, writing for BBC News out of Washington, D.C., more than 250 planes that crashed over the U.S. have never been found. While official sources do not provide a tally of still-missing airplanes, John Lopez Jr., a volunteer with the Missing Aircraft Search Team that worked to locate Steve Fossett’s remains in 2008, concluded that in 2017, a total of 658 aircraft had been missing for over 60 days in the U.S. Of those, 255 went missing over land, the remainder over coastal and inland waters. So, filing a flight plan is still a good idea.

To illustrate the wisdom of this precaution, I always create the following scenario: Dick and Jane are going to leave after work for a vacation in the western states, with the airplane packed for a 10-day trip. On the first day out, they run into difficulty and wind up on a mountain hillside, the airplane crunched and the couple alive but suffering incapacitating injuries. Two weeks go by, and they haven’t shown up for work. Their co-workers say, “Anybody heard from Dick or Jane? Weren’t they going on a trip somewhere?” But nobody knows where to start looking; they could be anywhere between Canada and Mexico. Elk hunters eventually find the wreckage and some gnawed remains.

Had they filed a flight plan, inquiries would have begun within 30 minutes after the filed ETA, the route would have been known, and searchers would have an idea of where to start looking. Yes, our Congressionally mandated emergency locator transmitter is supposed to bring the cavalry riding to the rescue, if it survives the crash and is sufficiently triggered by G-force. Maybe we carry a personal locator beacon; did we come through the crash in good enough shape to be used? With ADS-B’s Big Brother now watching us from space, our radar track can guide searchers—if anyone knows we’re missing.

MIGHT THERE BE OTHER WAYS FOR PEOPLE TO KNOW WE’RE MISSING? YES…BUT…

Are there other ways to let people know to start a search? Certainly, if you told the FBO’s office where you were going and when you’d be back, they might alert the FAA, and a responsible family member should be informed of your plans. But what if you change your mind en route and decide to stop over somewhere else? A weather diversion can change everything. A formal flight plan is a better third-party option.

The venerable VFR flight plan is simply basic trip insurance. If our timing and intentions are made known, somebody will come looking for us if we don’t show up. In my dim and distant youth, I spent days in the air with the Civil Air Patrol looking for lost aircraft, even before ELTs and satellites. CAP now relies more and more on ADS-B and even cell phone data to pin-point position, but eyeballs on a grid search are still the ultimate method of locating a crash. Without a flight plan, however, we early-responding brush-beaters didn’t know where to start looking.

FLIGHT FOLLOWING? BY ALL MEANS, BUT…

VFR Flight Following is a comfortable service provided by ATC radar, but, unlike a flight plan, it requires continuous interaction with radar coverage and voice communication. VFR pilots need to understand that Flight Following is a workload- permitting option for ATC; the controllers’ first duty is to separate IFR aircraft, and if they are too busy, VFR traffic may be denied service.

Personal locator beacons are a fine idea, a worthwhile addition to back-country survival gear. However, they are subject to failure, like any mechanical device, and their activation depends on coming through the crash in good enough shape to push buttons afterward. The flight plan, once opened, requires no further action to bring help.

How does it work? The pilot files a flight plan, most likely via a smartphone app, and it awaits activation by a radio contact to Flight Service after departure or by phone. After an hour passes with no word of activation, the system assumes that the flight didn’t leave, and the plan is discarded.

But once the flight plan is activated, the clock starts running on the filed time en route. If the flight runs late, the pilot must contact flight service directly or by proxy to extend the plan. Upon arrival, the flight plan MUST be canceled with Flight Service (not the control tower), either by air/ground radio or calling 1-800-WXbrief. After the half-hour without cancellation, the search starts. Do not make us get you out of bed to confirm that you aren’t really missing.

So, it’s still a good idea to file a VFR flight plan whenever you’re off on an incognito flight. At the least, tell somebody you left behind where you’re headed and when you’ll be back. There are still places in the U.S. where airplanes can go down and never be found, not too far off the beaten path.

The advantage of filing IFR is that you’re automatically “in the system” as soon as you pick up your clearance; search-and-rescue capability is a byproduct of your handling by ATC. But there are multiple reasons not to operate under IFR: The airplane you’re flying may not be reliably equipped for sustained instrument flight or even legal under 91.411. Even if instrument rated, the pilot’s recent-experience currency under 61.57 (c) may have expired. And the weather at IFR altitudes may be uncomfortable or dangerous, mandating a safe low-level VFR option. And sometimes we just want to be left alone to fly in peace, enjoying the scenery in solitude.

Filing a VFR flight plan remains a wise choice in any instance where you are going flying without anyone knowing when to expect you and where you’re headed. Airplanes can disappear for years, sliding out of sight under trees within a few miles of civilization, as in the 2007 case of famed adventurer Steve Fossett, whose airplane was missing for over a year in the Nevada wilderness. Take precaution and file; it’s cheap insurance—as in free.

How To File A Flight Plan 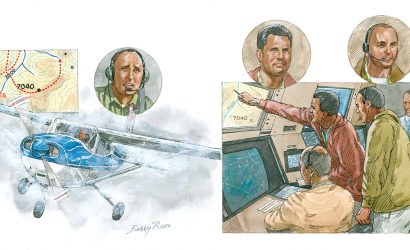 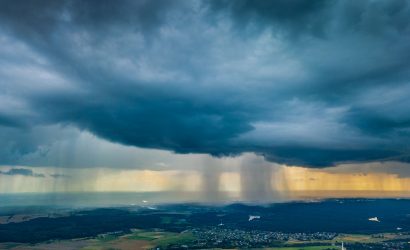 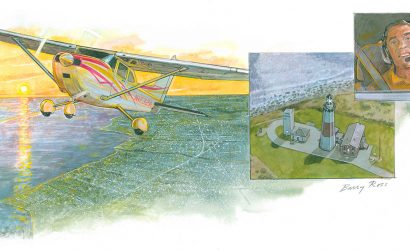