“When I am flying in Florida, I pretty much try to stay above 10,000 feet MSL until I absolutely need to land somewhere,” a friend once told me. He went on to say why. “There are so many people training down here who are so focused on their training that they don’t have a chance of seeing me flying through. It’s how I increase my odds of staying alive,” he finished.

I get it. In some places, there are quite literally hundreds of aircraft in the air on good-weather days within a 20-30 mile radius of some of the busiest homes of flight training providers—and not all of these hubs are in Florida, I should add. Regardless of location, this many aircraft in a small area pose risks for them with each other and with transient aircraft trying to pass through the areas where training is happening.

The risk of flying in, near or around places busy with flight training aircraft is something that can be minimized and mitigated. Here are a few tips that might help you keep from getting too close to other aircraft in these areas by knowing where they are and how to navigate them.

Look At That Sectional Chart

Some areas of high-density training are depicted on sectional charts. One longstanding example is to the west of Fort Lauderdale, Florida. Depicted and labeled on the sectional chart, Alert Area A-291A actually states “Concentrated Flight Training” as a part of its label. An area that’s used frequently by a number of flight training providers on the east coast of Florida, this practice area is identified by easily identifiable points that match up on the sectional chart.

Planning a scenic flight with a friend? This would be a good area to avoid if you don’t want to be on the lookout for multiple aircraft practicing or learning maneuvers for their next practical test for the first time.

“The risk of flying in, near or around places busy with flight training aircraft is something that can be minimized and mitigated.”

Search For Local Procedures And NOTAMs

In some places, local procedures become common, if not officially codified. A pilot wanting to do some flying in the Phoenix, Arizona, area would do well to visit the Arizona Flight Training Workgroup website (www.AFTW.org) and familiarize themselves with the practice area procedures used by the multiple training providers in that area.

An active group of FAASTeam representatives and FAA staff, flight training providers, DPEs and instructors have worked hard to put information out in this area that might keep aircraft from, well, getting too close to each other. This group has even gone as far as to provide downloadable and usable files that can be imported into applications such as ForeFlight and Garmin Pilot to overlay on charts to keep pilots flying aware of the busy practice areas.

These procedures sometimes aren’t limited to just where practice areas are but also how pilots in training might use resources. An example of this is the Stanfield VOR “stack” procedure.

It has become a standard practice with training providers in that area who are teaching the use of VORs for holding procedures or instrument approaches to, in essence, take turns using the facility. A “stack” procedure has been adopted where pilots will enter the “stack” at the top and separate themselves by 500 feet, slowly working down the stack and making radio calls not with ATC but with each other.

What if you were unfamiliar with this process and just passing through and thought a practice VOR approach would be a good proficiency builder? Or what if you were using this VOR as a navigation waypoint along your cross-country flight? The “stack” tops out for use in the training practices at 7,500 feet, so if you’re in the know, you might choose to fly at a higher altitude to avoid the training activities. Without checking for the local procedures, you might find yourself busting through a beehive of traffic over this heavily used VOR.

Use Your Traffic Awareness Systems—ADS-B

The addition of traffic awareness systems to many aircraft offers a fantastic opportunity to be more aware of traffic near you than ever in history. If you’re equipped with ADS-B In and have a display of traffic on your cockpit displays or a tablet device that gets the data, don’t discount it.

Ranging is a key and important part of this skill. I regularly put my ranges on something like a 10-mile ring and use it as a “warning range.” If I start seeing traffic closer than that, I run my range in to get a closer look. If it breaks 2 miles, I start to get nervous if I haven’t seen it and it is at a similar altitude.

Remember as you’re flying cross-country that other aircraft may have an instructor onboard just trying to keep that new student from allowing the aircraft to roll over on a Vmc demonstration during their multi-engine training. It can be challenging, at best, for an instructor in a busy training area to stay on top of all the area traffic and their student. Don’t make them be the only eyes looking out. Use your digital sources to help identify them as possible traffic conflicts for you also.

I would be remiss here if I didn’t note that not all aircraft will have ADS-B or even transponders. Don’t assume if your traffic system isn’t showing any local traffic that there isn’t any, but always take advantage of more information if it is available. Keep those eyes scanning outside even if you don’t see anything noted as traffic on your digital displays.

Communicate With ATC Or On A Practice Area Frequency

If you’re traveling on cross-country flights, do so with flight following or on an IFR flight plan when possible, even in VFR conditions and especially when in busy airspace. This doesn’t mean the ATC controllers will be talking with every flight training aircraft that may get near you, but if they are talking with you and see something on their scopes, they can give you a heads up. This can even be something you do when you are flying locally when ATC traffic volume allows them to provide services. Frequently, local practice area frequencies are also used where training aircraft report their positions and intentions in the blind to each other. The most commonly used frequency for this is 123.3 in many locations around the country. When in doubt, monitoring this frequency on a secondary radio can provide some awareness of other traffic that may be in your vicinity and their intentions.

Fly At Altitudes Unlikely To Be Used During Training

The vast majority of training doesn’t happen at higher altitudes. With a little exception for multi-engine aircraft training, the overwhelming bulk of the training is done below 6,000 feet AGL. A great deal of it is done in airport traffic patterns, at approximately 1,000 feet AGL for ground reference maneuvers and from 3,000-5,000 feet AGL for stalls, slow flight and commercial training maneuvers. Most instructors don’t bother to take the time to climb much higher, and many of the training aircraft don’t have the performance to do so quickly. So, knowing this, when I am flying through high-density training areas, I try to avoid the altitudes at which most of the training will be conducted. Back to that initial comment I said a friend of mine once made. Turns out, there was a pretty good bit of sage advice in that comment. Flying through Florida, across Arizona, Southern California, busy Texas, or nearby any other place where big flight schools push large numbers of aircraft into the air on training missions might be best done at altitudes that avoid where much of this training will be conducted. 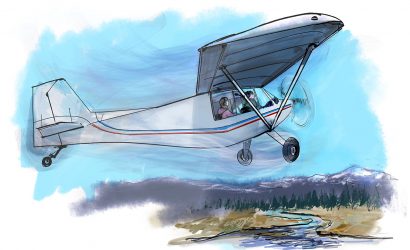 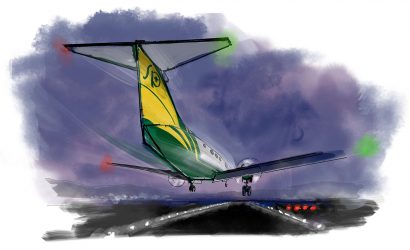