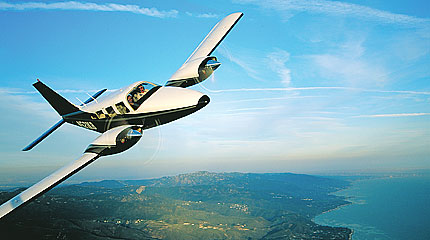 Kim Bass is an unusual pilot with an unusual airplane. Bass is a Hollywood screenwriter who manages to survive in one of the world’s most cutthroat businesses. Bass has been writing TV and motion-picture screenplays for 13 years, taking scripts from concept to treatment to pilot and sometimes all the way to production. Amazingly, he has yet to file bankruptcy even once.

The screenwriter’s airplane is a 1978 Piper Seneca II. What’s so special about a quarter-century-old example of Piper’s everyman’s multi, you ask? For one thing, it’s a very young 25-year-old, having logged only 1,600 hours total time and has seen only two owners, including Bass. In addition, N521KB is tricked out to the max. In fact, it’s one of the most modified Senecas we’ve seen here at Plane & Pilot.

Bass started with an already excellent 1978 Seneca II and improved the airplane from there. The previous owners, Dr. David Rummell and his wife, Wanda, of Prescott, Ariz., had kept the Seneca in better-than-new condition and had added a Robertson STOL kit, improving on what was already an impressive utility design.

The Seneca II (technically known as the PA34-200T) is essentially a twin-engine, retractable Cherokee Six and was the second version of the Seneca (duh), introduced in 1975. Unlike the original PA34 that featured normally-aspirated Lycoming powerplants, all subsequent Senecas mounted turbocharged Continentals. The airplane’s thick wing, open gear wells, big cowls and otherwise considerable drag signature virtually guarantee the type will never be speed demons, but Bass has matched the national debt of Peru updating his airplane for maximum performance, mostly in search of speed.

Aerodynamically, Bass augmented the Robertson STOL kit with a LoPresti Speed Merchant package that modernizes and improves the cowling nose bowls, installs a one-piece windshield and introduces a variety of lesser improvements. Collectively, the upgrades added at least eight knots to cruise and Bass confirms that, yes, the speedup is real. “I had my doubts that any of the aftermarket mod packages could do me any good,” says Bass, “but Roy LoPresti’s promises were pretty much right on target.”

Then, there’s the myriad of other options Bass added to improve aesthetics, avionics capability and overall utility. Paint and interior underwent a full revision to Bass’s personal specs, including upholstering the yokes in soft glove leather.

Naturally, the panel includes the latest dual Garmin 430 GPS/VHF/NAV/COM wonders plus an S-TEC 55 autopilot, Sandel EHSI, Shadin fuel computer, Bose X headsets all around, an Alpine CD changer, a Sharp microwave oven, a built-in 2.4 GHz desktop Compaq computer, a complete library of the works of Ernest Gann, Richard Bach and…forget the last three, you get the idea. There’s not much a Gulfstream GV can do that Bass’s airplane can’t, except perhaps climb three times as fast and fly twice as high and fast with more passengers in greater comfort over longer range.

Still, Bass’s Seneca is among the most capable of its type. Despite all the options, empty weight on Bass’s twin remains a respectable 3,116 pounds against a 4,750-pound gross. Top the 123-gallon tanks and the airplane is left with almost 900 paying pounds, enough for five folks plus baggage. “I have a friend, actor Lorenzo Lamas, who owns a new Seneca V,” says Bass, “and his airplane has under 600 pounds of payload.” Despite bragging rights, payload isn’t a major concern for Bass. “I usually fly the airplane on weekends as a getaway machine for breakfast or lunch flights, so load doesn’t normally mean much. If I have to, I can always leave the fuel load down 50 gallons and carry a full six people.”

However many passengers fly with Bass, they all travel in reasonable comfort. The Seneca II’s cockpit is 49 inches across up front, enough to enclose even two fairly wide people. Access to the rear is better than in the forward seats by reason of the double side door. People enter/exit through the forward cargo door and baggage goes aboard after lifting the rear portal. Like most Senecas after 1975, Bass’s airplane is fitted with conference seating—the second and third row of seats face each other.

It looks a classy way to travel, but looks can be deceiving. In the Seneca application, there’s a definite lack of leg and foot room for facing passengers. The only way to sit directly across from another passenger is with legs overlapping, not such a bad arrangement if your opposite is a significant other, but not too desirable otherwise. Another minor inconvenience is that the center row of aft-facing seats won’t recline, because their backs are flush with the front seat backs.

Picky, picky, picky. Personally, I’ve always had a soft spot for Senecas, regardless of their niggles. For me, flying Bass’s Seneca II was a little like old home week. I operated a similar company airplane for two years and 600 hours in the late ‘70s, flying and writing for a Midwest publishing firm, though I remained based in California.

The company wasn’t always happy with the maintenance bills on that 1975 Seneca II, but I gained a great deal of reverence for Piper’s first 200-hp turbocharged twin. I flew their totally stock Seneca II regularly in and out of a 2,000-foot grass strip in central Wisconsin. The airplane never knew the difference. On a good day, I could touch down and stop in less than half the strip.

I traveled to all four corners of the U.S. and Canada in that airplane, and at one time in 1979, Piper told me it was the highest-time Seneca II they knew of. I hope N103JH still lives happily in someone’s carpeted, air-conditioned hangar. It deserves to live out its years in comfort. It certainly worked hard for me.

Bass reports he’s had a similar experience with his super-Seneca. His airplane doesn’t work nearly as hard and is far better equipped than mine, but the screenwriter says the combination of mods makes the airplane something special, especially during takeoff. The Robertson kit cuts the ground roll to a mere fraction of normal. If there’s a need, Bass can scamper off a paved, dry runway in considerably less than 1,000 feet.

With a total of 440 hp out front, 4,750 pounds of airplane to lift and 208 square feet of wing to do it with, the Seneca II is an enthusiastic climber. When lightly loaded, the airplane will deliver almost 1,800 fpm at VY. Pile in the pounds to gross and you’ll see more like 1,400 fpm. With turbos as standard equipment, climb holds up well at high altitude, too. Count on seeing 1,000 fpm or more through at least 14,000 feet.

Despite the extra horsepower and the benefit of turbocharging, single-engine performance isn’t quite so impressive. The book says single-engine climb is only 240 fpm, and that’s assuming you’re doing everything right. At least, you can take some consolation in the fact that the Seneca II’s dirty stall speed (62 knots) and VMC (66 knots) are so close, you may be hard-pressed to demonstrate VMC, especially in view of the fact that the right engine turns left, helping to balance the torque of the left engine. Senecas have always been too much airplane for the training role, anyway, and the diminished effect of VMC is a bonus.

Piper intended the Seneca to fly like a Cherokee with a hormone injection, and that pretty much describes the way Bass’s airplane feels in flight. Despite the fact that Senecas are twins, they try not to act like it. Run the throttles and props together, turn on the synchrophaser and you could fairly easily mistake a Seneca for a heavily loaded Saratoga with oodles more power.

Senecas are almost universally gentle to a fault, slow in roll and relatively heavy in pitch, but that’s desirable in a twin. Bob Hoover could probably do a great roll-and-loop routine, but he probably wouldn’t enjoy it. The type is almost universally stable and predictable in all flight modes. Like their derivative Cherokee Six design, they can run out of elevator at forward CG positions and tend to land flat if you’re not clever enough to keep the trim moving and leave the last notch of flaps up with only two up front and a heavy fuel load.

Flying at gross on virtually every flight, Bass typically sees a very consistent 181 to 182 knots at 75 percent settings, operating at 13,000 feet or less. Fuel flow on Bass’s updated II runs 29 gph total at 75 percent, 23.5 gph on those rare occasions when he uses 65 percent. “I know some pilots feel max cruise is a waste,” Bass comments, “but I always cruise at 75 percent, as fast as I can. Everyone’s entitled to do their own thing, but for me, it seems a little silly to buy an airplane capable of good speed and fly it slow.”

One hundred eighty knots isn’t that big a number, but you have to remember the basic Seneca is a very draggy airplane, though Bass’s example is cleaner than stock, with probably 10 knots more speed. The airplane has what is essentially a fat, Hershey-bar wing and few state-of-the-art aerodynamic tricks. Even if you climb on up to 20,000 feet or more, you’ll add only about 15 to 20 knots to true airspeed.

At the opposite end of the trip, Bass reports his Piper makes a better-than-average short-field machine, especially with the benefit of the Robertson STOL conversion. Approaches are simple affairs that can be flown at your choice of airspeeds, from 70 knots (with the Robertson kit) if there’s a need to plunk it on and stop it short, all the way up to 130 knots if you need to stay ahead of the G5 on the ILS behind you. As with most twins, gear and flaps are the great airspeed equalizers that keep the engines warm, yet bring the speed down to manageable levels. Collectively, all the drag additives allow slowing the airplane for landing without having to shock-cool the engines.

Some pilots claim the Seneca, like the Twin Comanche, is a tough machine to land. My touchdowns in Bass’s twin weren’t exactly greasers, but experience with this airplane and several others over the years suggest the myth is just that. The type really isn’t that tough to return to Earth. The nose does get heavy at low speeds in dirty configuration, though. I keep the trim moving and the power up to try to cushion the actual touchdown, and most of my landings are acceptable, if not always worth bragging about.

Senecas are good instrument platforms, certified for icing if you are, and willing to take on just about any weather there is. They’re willing friends in a variety of conditions. In fact, flexibility may be their ultimate recommendation. The type are among the most versatile airplanes on the market—executive transport, family airplane, utility freighter or multi-engine trainer—though it’s hard to imagine allowing a new student twin driver to abuse those expensive turbos.

PA34s of any vintage aren’t picky about runway length or surface, asphalt or grass, and anything from 2,000 to 12,000 feet will do just fine. Though superbly restored and improved examples such as Bass’s are the exception, even standard examples won’t balk at lifting a piano in place of full leather buckets, and the wide double doors at aft left make it easy to load whatever cargo you choose.

In short, Kim Bass’s new/old Seneca II1⁄2 represents perhaps the best of the early turbocharged PA34s, an airplane happy to carry people or things over near or far horizons from where they are to where they need to be.