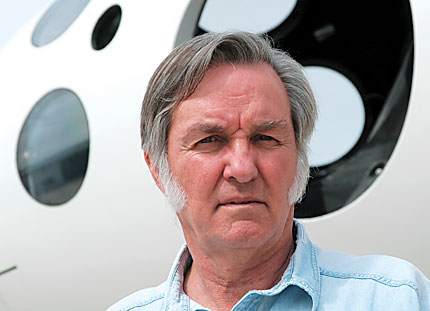 Before pilot Brian Binnie soared and flew right into world history aboard SpaceShipOne on October 4, 2004, team leader Burt Rutan had a little advice for his old golfing buddy. Just after 6 a.m. inside a hanger at Mojave Airport in California, Burt leaned into the bug-like spacecraft’s cockpit and said, “Use the driver. Keep your head down and swing smooth.”

Translation: Go for maximum distance, but just make sure you keep it in the fairway. As it turned out, Binnie scored a galactic hole-in-one. The flight couldn’t have been more perfect. On a crystal-clear California morning that was unusually calm for the high desert, Binnie soared seamlessly to a suborbital height of 367,442 feet, thereby securing a $10 million first prize in the Ansari X Prize competition given to the first privately funded spacecraft to carry a pilot and the equivalent weight of two passengers into space twice in two weeks.

Although Burt has been a big part of aviation history (he has designed about 40 aircraft, including the Voyager airplane, which his brother Dick and Jeanna Yeager flew around the world on one tank of gas), SpaceShipOne is his Mona Lisa. “We showed the little guy can do it and do it safely.

But this is, by far, the biggest program we’ve ever had because it involves two airplanes, and one of them is a big, high-lift, twin turbo jet, after-burning-carrying airplane. We had to develop a rocket motor from scratch and then do all the testing.”

Behind Burt on a table as he talks in his cluttered office is a model of SpaceShipOne with “Virgin Galactic” painted on it. Virgin Airways owner Sir Richard Branson spent more than $20 million purchasing the rights to Burt’s SpaceShipOne technology so he can fly tourists into space aboard aircraft built by Burt at $200,000 a ticket. (And you won’t even get a meal. “People will be more interested in looking out the window,” says Branson.)

“Burt is the most brilliant aviation engineer in the last 100 years,” he says. “I’m fortunate to tie up with him. If someone says that it’s impossible, he will sit down and try to prove them wrong, and he has proven a lot of skeptics wrong today. One day, with this little bit of investment here, in a few centuries’ time, instead of Virgin Galactic, it could be Virgin Intergalactic.”

Burt plans to make spacecraft for Virgin that will go to heights of more than 450,000 feet. He remarks, “Richard Branson has the courage to take the technology now and go straight to operational use where thousands of people can fly.”

The way things are going, Burt believes all this could lead to resort hotels in space one day. “If you would have told me when we started in 2001 when I laid it out for Paul that we would finish this program flying six powered flights and three of them being space flights, I would have said, ‘Naaahhh!’ The ship worked a lot better than any of us could have hoped. SpaceShipOne has some specific goals: Manned space flight can be flown at high safety levels compared to current manned space vehicles. For space tourism to occur, we must be safer than the early airliners were, and that’s where our focus has been. Thanks to Richard Branson’s plan to move this into the next step, we have a big challenge in front of us now. Remember the Voyager when it flew around the world in nine days and set a milestone? The Voyager flight set an enormous important milestone. It demonstrated courage. It demonstrated risk, but when we were all done with it, we had a milestone and nowhere to go with it. The difference with this program, thanks to Richard Branson, is that we have a milestone and a challenge in front of us. We’ve only begun.”

Burt, 61, has always had “the right stuff.” The youngest of three, he grew up in Dinuba, Calif., near Fresno. His father was a dentist who gave up golf to buy a small plane and got his children hooked on aviation. “Both of us had aviation fuel in our veins,” says Burt’s brother Dick, a 14,000-hour pilot.

Burt began making—and designing—model airplanes at an early age. “He would design a plane that would do some incredible things, and I’d look at it and say, ‘There’s no way that will work.’ Of course it did,” says Dick.

Burt was the Charles Lindbergh of model-airplane competitions. “He would come up with really innovative and creative solutions that blew everybody else away,” recalls Dick. “There were a lot of rules in model-airplane contests, and he would find some way to blow away the competition while keeping within the rules.”

About age 14, Burt designed a Harrier Jump Jet before there was a Harrier. “There was a carrier competition, where the planes take off and land on a little carrier,” explains Dick. “Two of the contests were how fast you can go and how slow you can go. He designed a carrier plane that could actually hover. They had to change the rules because of him.”

Burt earned a bachelor’s degree in aeronautical engineering in 1965 from California Polytechnic University and went to work as a civilian flight-test engineer at Edwards Air Force Base, which is just down the road from Mojave Spaceport, er, Airport. He was there when the X-15, which inspired the naming of the X Prize, was doing tests that helped lay the foundation for the Mercury, Gemini and Apollo space programs. He conducted more than a dozen flight-test programs on military aircraft, like the F-4 Phantom.

In 1974, he founded his own aerospace company and became known for his fiberglass, radically designed experimental build-it-yourself aircraft, like the popular Long-EZ, which looks a lot like SpaceShipOne. He gave up dangerous test flights four years later.

“It was during a dive test in the Defiant [another of his award-winning designs] right after a friend of mine had been killed doing the same thing,” recalls Burt. “I was going faster and faster, and I just thought, ‘Why am I doing this?’ From that time until 1996, I never flew a first flight, a dive test or a spin test, although I did some testing within the envelope. But then, when I built the Boomerang [a radical twin-engine design], I couldn’t bring myself to have somebody else fly that on its first flight, and then later, I did the dive test on it.”

His single-minded devotion cost him two marriages (he has two children from his first). He met his third wife, Tanya, on a blind date 17 years ago. She knew nothing about airplanes. Burt says, “I took her for a ride in the Defiant on our second date, and she just thought that it was a normal airplane.”

Now, she’s an expert and has even soloed, but she never got her license. “I’ve always liked people who work with their hands,” she says. “He’s an open person. He doesn’t hold much back. He’s funny and smart. He’s an engineering genius, but he’s a guy who can go out in the shop and make what he draws. I’m proud of him, but I’ve always known that he has been able to do these things.”

They live in a pyramid-shaped house a few miles form the airport that was once featured on the cover of Popular Science. “It’s so that I don’t listen to the noise of the wind, and it’s energy-efficient in the summer,” shrugs Burt, who doesn’t fly anymore since he had a defibrillator put in his heart two years ago and couldn’t pass the FAA medical that pilots need to fly.

He set his sights on space in 1993 and will now devote the rest of his career to it. “The more I got into developing research airplanes, and some of them were pretty high-performance—one had the longest range in the world, the Voyager, and one had altitude records, the Turbofan—I wasn’t afraid to build a supersonic airplane like I would have been when I was doing just light airplanes. Once I got to that point, I got fascinated by doing it.”

That was also around the time he met Peter Diamandis, a 43-year-old Santa Monica, Calif., entrepreneur who came up with the idea of the Ansari X Prize (now named after the Ansari family, the Iranian-born telecommunication billionaires). “I was reading The Spirit of St. Louis, the book that Lindbergh wrote about his flight,” says Diamandis. “He spoke about the early days of aviation and how there were dozens of prizes that were mostly put up by media companies that wanted news stories. By the time I had finished reading the book, the concept of the X Prize had come into my mind.”

His hopes to foster a new industry seem to be coming true. “One of my personal goals is to go up myself, but beyond that, I hope to foster a new era in commercial space flight. There were many people like me helping to get the first airlines going. I’m tired of waiting for the government to do it, but then, I concluded that it’s not the government’s job to do it. It’s my calling in life. It’s what drives me every day. It’s why I’m on the planet—trying to find a way to get off it.”