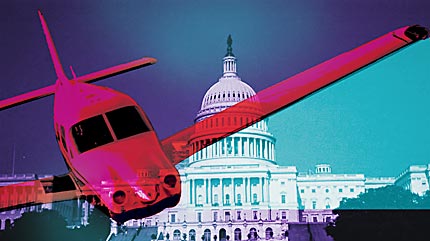 Once upon a time, you could pull the airplane out of the hangar, fire up the engine, point it into the wind and fly. Wherever you want, whenever you wanted. As time went on, rules and procedures began to be as much a part of a pilot’s skills as the ability to fly with a stick and rudder.

On September 11, 2001, the sheer number of rules and the potential cost of ignorance grew exponentially. On that day, one poor fellow paid a severe price for the sudden change. He woke up on what to him was a normal VFR day, preflighted the airplane and flew it less than 17 miles to fill it with avgas. It was a beautiful morning, the weather was great, and he needed to fly! What he missed was the sudden paradigm shift that occurred mid-morning on that fateful day. His license was suspended for 240 days because he missed a national emergency and the nationwide ground-stop that followed.

Terms like Air Defense Identification Zone (ADIZ) and temporary flight restriction (TFR) quickly came into widespread use among the general-aviation pilot group. Those terms had been around for years. Military fighters and the ADIZ protected American coasts from intrusions by Russian Bear Bombers throughout the Cold War. TFRs were used for presidential security and other extraordinary events. But they weren’t part of a pilot’s everyday life. You didn’t get intercepted and forced down if you flew through a TFR.

Today, things are different. There’s an ADIZ that surrounds Washington, D.C. In the four years after 9/11, it was violated over 1,000 times. The North American Aerospace Defense Command (NORAD) has scrambled fighters for intercepts within U.S. borders over 1,600 times. In the year previous to 9/11, NORAD intercepted airplanes in the ADIZ only 67 times, none of which occurred within the U.S. borders. In 2003, the prohibited area that surrounds Camp David in Maryland was violated over 80 times, and the prohibited area called P-49, which surrounds the Bush ranch in Texas, was violated more than 140 times. For each violation, a standard 60-day suspension awaits the transgressor.

A license suspension is nothing compared to what awaits a penetration of the Washington, D.C., ADIZ. Hayden “Jim” Sheaffer wandered into the D.C. ADIZ on May 11, 2005, and forced the evacuation of 35,000 people. Oblivious to his position or his impact on others, he flew within three miles of the White House, triggering the first red alert since the terrorist attacks of 9/11. His transgression led to the interception by F-16 fighters that dropped flares and a DHS Black Hawk helicopter that directed him to land at Frederick, Md. Sheaffer was on a VFR cross-country with student pilot Troy Martin; he had planned the flight and checked the weather, NOTAMS and TFRs. In his mind, he was prepared.

Reportedly, Sheaffer flew a more southern course to avoid Camp David, but didn’t realize that he was headed directly to the middle of Washington, D.C. He also reportedly didn’t use a GPS. Whatever can be said about his pilotage, there’s no mistake that he didn’t avoid any of the sensitive airspace in the area or the national acclaim that comes with such a visible violation. The threat he unknowingly faced was a possible shootdown. Intercepting fighters had air-to-air missiles, but no order to shoot was given or considered. Purportedly, the U.S. Secret Service guards the White House with Stinger surface-to-air missiles. Sheaffer unwittingly risked death to shave a few miles off of his cross-country. In the end, the FAA revoked his licenses under emergency authority.
Advertisement

Another example is the pilot who was forced to land in 2004 when he inadvertently flew through a VIP TFR that had been activated while he was airborne. In Sheaffer’s case and this one, the pilots had complied with the Part 91 directive that “each pilot in command shall, before beginning a flight, become familiar with all available information concerning that flight.” The regulation doesn’t specifically state that you should check NOTAMS or TFRs, but doing so has become a de facto requirement of 91.103.

Still another pilot took off on a beautiful VFR day for a flight around the patch. Unbeknownst to him, a hazard TFR that came within a mile of his airport had been set up. Running afoul of the somewhat capricious TFR system is a very real problem affecting every pilot flying today. Perhaps we should be grateful that staying out of trouble still rests with the pilot in command. The alternative would probably mean grounding altogether.

It’s not hard to understand why lawmakers are becoming frustrated with pilots, especially those intruding into the restricted airspace surrounding Washington, D.C. There is legislation before the United States Senate that calls for a $100,000 fine, the confiscation of the aircraft and a five-year loss of flying privileges for “whoever negligently flies an aircraft in a manner that violates Washington, D.C.,…or causes the evacuation of a federal building or any other public property.” In the House of Representatives, another bill seeks to impose a $10,000 to $100,000 fine and a two- to five-year certificate suspension. Clearly the government is losing its patience.

How we stay out of the gristmill of FAA enforcement action requires an application of some old as well as new pilot skills. Perhaps the easiest solution, if money is not an object, is to install weather datalink capability in the cockpit that includes real-time TFR notification. That way, you can see the pop-up TFRs as they become a factor to your flight path. The technological solution isn’t always available. As a matter of fact, reliance on technology may be at the heart of a significant number of navigational errors.

Planning your flight and checking weather, NOTAMS and TFRs is where we should all begin. Whether for a flight around the local patch, or a 2,000-mile cross-country, you should become familiar with all issues that might affect your flight. Using current charts is another good idea to avoid a new tower or prohibited area along your route of flight.

Talking to ATC is an unguaranteed way of keeping you out of trouble. If flying under VFR, you might consider using flight following. GPS has caused many of us to become dependent on a little screen for situational awareness. If you’re flying VFR, it’s probably a good idea to brush up on your pilotage skills and look out the window every so often. Knowing where you are means you have to work at it at least a little faster than you’re traveling. Try leaving the GPS off every once in a while and keeping up with your position on the sectional.

Check in with the FSS operators in the air and on the ground between fuel stops. Besides being happy to hear from you, they also should have ready access to the latest weather, NOTAM and TFR information. Take a lesson from military fliers and listen to the emergency frequency 121.5 whenever you don’t have to use the spare radio to talk to someone else.

While some unauthorized transgressions sometimes go unchallenged, federal authorities are considering a number of ways to more strictly enforce airspace regulations. One area in Nevada has suffered such a spate of disregard from general-aviation pilots that officials have experimented with high-definition video cameras that can capture an aircraft’s tail number from a distance of more than five miles. Other plans unavailable for public discussion also are on the table to help the feds cut the number of TFR incursions to a minimum.

Increase your odds of a successful flight by keeping track of those things that will get you into trouble. As pilot in command, you’re the one who’s responsible for staying out of trouble. Awareness and diligent checking of the system for “gotchas” are the way to stay out of trouble. Good luck and good flying!