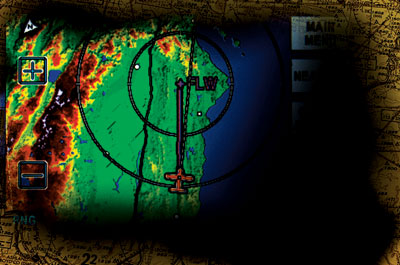 Pilots today are increasingly dependent on electronic navigation and communication equipment: GPS for navigation, satellite radio for weather avoidance and VHF for voice communications (since September 11, no pilot can seriously think about flying in controlled airspace without one). If you’re lucky enough to fly a late-model glass-panel airplane, you’ve got all that (and more) at your fingertips…until your alternator quits! If you fly an older airplane, you probably depend on steam-gauge instrumentation that limits situational awareness, and you’re just as dependant on your alternator for key navigation and communications equipment as the glass-panel guys.

The solution, for many pilots, is to reach into their flight bag and pull out a handheld backup device. Many pilots carry both a handheld GPS and a handheld VHF radio, which may offer NAV and COM features. Many pilots of older airplanes keep the GPS on a yoke mount, where it functions like a smaller version of the multi-function display (MFD) that’s standard on glass panels. Some pilots prefer a more general-purpose device called an electronic flight bag (EFB) that offers electronic charting, in-flight weather, traffic and, in a few cases, even 3-D synthetic vision.

The fundamental decision when buying a device for navigation and weather avoidance is whether you want a dedicated GPS navigator or a more general-purpose device that can also be used on the ground. Lately, the line between those categories has begun to blur as purpose-built aviation devices have gained more and more features, while general-purpose devices have become easier to configure and use. Still, the differences are worth taking into consideration when making a purchase decision.

A dedicated GPS navigator with an aviation database is designed and built to be used in the cockpit. It has either a reflective display that can be used with an external light source, or a backlight that’s bright enough for you to see the display even in direct sunlight. It probably also offers options to dim the display for use at night. Dedicated buttons for common functions may include an emergency mode, enabling you to locate the nearest airport. Mounting hardware, for attaching the device to the aircraft yoke or glare shield, is readily available and may be included in the box.

The downside to a dedicated navigator is that it isn’t much use outside the airplane (though a few are beginning to offer street-level databases and turn-by-turn navigation for use in a car). That’s where the EFB has an advantage. EFBs are based on general-purpose hardware, which may be a small PDA or a larger, Microsoft Windows–based Tablet PC. In either case, when you’re on the ground, you just close the aviation software and use the device for other purposes. PDAs have built-in software for appointments, contacts and note-taking, while Tablet PCs can run virtually any program that you’d normally run on a desktop PC. This can be a real boon to pilots who fly on business: Instead of leaving the GPS navigator in the airplane and taking a separate notebook computer, just bring the EFB with you.

EFBs also offer a more flexible choice of aviation software. You can run whatever flight-planning software you choose, and switch from one program to another if you find a new one that offers better features. You can get electronic charting software that completely replaces the usual case full of paper charts; there are, however, a couple of catches.

Tablet PCs and PDAs weren’t designed for use in the cockpit. They’re general-purpose devices intended mainly for use on the ground, and that can compromise their functionality in the air. Most PDAs have transflective displays that work well in any light, but this isn’t true of Tablet PCs. Before buying any such device for aviation use, ask to see what it looks like outside on a bright day. Also ask to see it in very dim light: Many Tablet PC backlights can’t be turned down enough, and can be blinding in a dark cockpit. Most EFB software that run on PDAs and Tablet PCs have a touch-screen interface with on-screen menus and buttons that are accessed using either a stylus or your finger. That works fine on the ground, but can be difficult in rough air (to be fair, dedicated buttons can also be hard to use).

Another catch is that EFBs aren’t as reliable as dedicated aviation GPS navigators. That’s a direct consequence of using a general-purpose platform. The avionics vendors who make GPS navigators completely control what software is used on the device, which creates a predictable environment. That’s not to say they’re perfect, but the odds of having a problem are low, and if you do have one, turning the unit off and then back on will usually fix it in a matter of seconds.

Not so with an EFB, where you’re running a general-purpose computer operating system, which hosts your aviation software on a general-purpose computer. The same bugs that bedevil desktop computer users also can impact your EFB, and some vendors of EFB software recommend that you run only their software, with no other applications. That gives a more reliable environment, but defeats the purpose of having an EFB.

Once you’ve made the choice between a dedicated GPS navigator or an EFB, the next thing to consider is what features you want. Most devices offer basic moving-map navigation, but that’s only a beginning. Other available features include satellite-radio-based weather (which requires buying a satellite radio receiver and weather subscription) and traffic (which requires a Mode S transponder, ADS-B device or portable traffic sensor). This is where EFBs have an advantage: As a general-purpose device, you can add weather or traffic to just about any EFB by purchasing the necessary hardware and an appropriate software package. If you want these features on a dedicated aviation GPS, you’ll have to pay for them up front; only top-end models support them.

Other features that may be built in (or available) are sophisticated aviation databases including instrument approach procedures. Though you can’t legally use any portable device as your primary navigation source while flying IFR, monitoring the procedures on a moving-map display is perfectly legal for situational awareness on Part 91 flights, and in a pinch, the ability to fly those procedures could save your hide! A few devices can provide a complete backup instrument panel, based on GPS position and/or input from an electronic gyro. In an absolute worst-case scenario (simultaneous electrical and gyro failure while flying IFR), that could save your life.

Two more items bear consideration: mounting and power. While all these devices are called “handheld,” in practice, most pilots mount them on the yoke or glare shield. Most dedicated GPS navigators run on standard batteries, and can also be run from a cigarette lighter, if your airplane has one. That’s a good solution for most pilots: Run off the aircraft electrical system and save the batteries for emergencies. EFBs, by contrast, almost always have rechargeable batteries, and may require special adapters to run off the aircraft electrical system. If you only fly short hops, running off the battery is fine, but Murphy’s Law says the one time you fly an unexpected extra leg will be on a day when you forgot to charge the battery! And now, on to the handhelds:

BENDIX/KING’S AV8OR is a shirt-pocket-sized device with a 4.3-inch touch-screen LCD and integrated GPS. It includes an aviation database with terrain, navaids, obstacles, airspace and airports, and an automotive database that provides street-level maps, turn-by-turn navigation and points of interest. The AV8OR can also display aviation weather data from an XM Satellite Radio receiver (not included). Price: $749. Contact: Bendix/King, (800) 601-3099, www.bendixking.com.

GARMIN’S GPSMAP 695 AND 696 add a seven-inch portrait-format display and electronic charting to the already rich feature set offered by the previous top-of-the-line GPSMAP 495 and 496. All four models include a complete aviation database with terrain, navaids, obstacles, airports, instrument procedures, taxiway diagrams and AOPA’s airport directory. The GPSMAP 696 adds an IFR map mode, offering a display similar to standard en route charts, and includes electronic U.S. approach procedures; the GPSMAP 695 is available in versions optimized for use in North American, Pacific or Atlantic airspace. Like the GPSMAP 496, the GPSMAP 696 also includes a built-in XM Satellite Radio receiver for aviation weather (which requires an XM Satellite Radio subscription), support for TIS traffic if you have a compatible Mode S transponder (not supplied with the unit) and turn-by-turn ground navigation with a wide range of predefined points of interest. All four models offer a GPS-based simulated instrument panel for emergency use that updates five times per second. Price: $3,295 (GPSMAP 696), $2,695 (GPSMAP 695); the smaller GPSMAP 496 and 495 are available at lower prices. Contact: Garmin, (800) 800-1020, www.garmin.com.

AVMAP’S GEOPILOT II PLUS is a GPS navigator that can be used both in the air and for turn-by-turn navigation on the ground. Its features include a 5.6-inch color display, oversized control buttons and a unique thumb-stick cursor control. A Jeppesen North America database is included with navaids, airports, low-altitude airways and terrain. Other features include flight planning, E6B functions and optional aviation weather when used with a compatible XM Satellite Radio receiver (not included). Price: $1,199. Contact: AvMap, (800) 363-2627, www.avmap.us.

STENBOCK & EVERSON’S CHARTCASE PROFESSIONAL SOFTWARE turns a Tablet PC running Microsoft Windows into a Class-1 EFB with features including weather (when used with a compatible XM Satellite Radio receiver), moving map (when used with a compatible GPS receiver), digital charting and even GPS-based synthetic vision. The software runs on any Windows-based PC with a 900 MHz processor and at least 512 MB of RAM. Price: $449. Contact: FlightPrep, (503) 678-4360, www.flightprep.com.
Advertisement