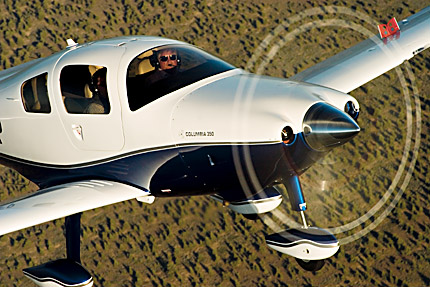 Looking down on the Bend, Ore., airport from 2,000 feet AGL, the ramp at Columbia Aircraft resembled an air show in progress. There were airplanes everywhere. My quick count came up with 63 Columbia 350s and 400s waiting for delivery to their new owners. That’s probably $30 million worth of airplanes. There was little question that Columbia was back from the brink, big time.

Columbia Aircraft (formerly Lancair Certified Aircraft) is perhaps representative of an industry that’s been in turmoil for the last quarter century and has only begun to emerge from its downward spiral in the last four years. The American general aviation industry cranked out an amazing 17,811 airplanes in 1978, then dropped to fewer than 1,000 in 1994 and recovered to 3,500 last year. In fact, the General Aviation Manufacturers Association reports that billings for the first quarter of 2006 were the highest in history.

Columbia, the newest major manufacturer in the industry, is riding the crest of the upswing. The company’s normally aspirated 350 and turbocharged 400 have emerged in the last two years as the airplanes to beat. Though the Cirrus SR22-G2 is still the best-selling airplane in the world, the Columbia 400 claims the title of fastest production piston airplane.

While the 350 is Columbia’s entry-level model, there’s nothing entry-level about the airplane itself. It features all-electric systems (with either an Avidyne Entegra or Garmin G1000 two-screen glass panel), composite construction, side-stick controls and enough extra goodies to make a Gulfstream captain envious.

The airplane I flew at Bend with factory check pilot Scott Fordham was one of six 350XLs to be delivered to a company based in Long Beach, Calif. By the time you read this, iFly will have launched its managed-access program, which allows members to fly new Columbia 350s without the hassles of ownership.

From the moment you step up to a 350, it’s clear this is a new-generation airplane. Designer Lance Neibauer has always been a free thinker, and he says he tried to incorporate as many innovations as possible into the production airplanes without compromising certification efforts. “The Columbia models were derived loosely from the Lancair ES homebuilt,” says Neibauer. “You obviously design airplanes a little differently when you know they must be certified. The Columbia 350 and 400 pushed the technology about as far as possible, consistent with the time and expense of certification.”

As with the Piper Malibu, which was regarded as revolutionary in 1984, not everything on the Columbia was new. (At the Malibu introduction party, designer Jim Griswold admitted to me, “In fact, there wasn’t anything really new on that airplane. It was all known technology that no one had ever utilized before.”) The original Columbia 300 was also a collection of better ideas that hadn’t been fully utilized before. Construction is all-composite, a method previously employed on a few homebuilt airplanes, but not generally accepted in the industry.

To ease a person’s access to the cockpit, the airplane incorporates fold-up gull wing doors, a concept previously employed on the Socata Trinidad/Tobago/Tampico. Like the Cirrus aircraft, Columbia planes utilize flat-panel PFD/MFD displays, originally by Avidyne. Side sticks are mounted for roll and pitch control, freeing up panel space directly in front of the pilot and copilot. Climate control is by rheostat—at last! Even if you understand the technical challenges associated with air-conditioning in general aviation airplanes, it’s always been a little incomprehensible that a typical $300,000 airplane has environmental systems comparable to those in a 1950 Ford.

The idea was to offer an airplane with a glass at least three-quarters full. Taken collectively, the Columbia’s features make it technologically superior to the vast majority of general aviation aircraft.

The Columbia 350 is an all-electric airplane, with no vacuum or hydraulic systems. It features separate wire routings, batteries, alternators and regulators with full crosstie capabilities. There are no vacuum-driven instruments to fail because there’s no vacuum system installed. Overall, the Columbia 350 is about as futuristic an airplane as any that you’ll find on the market.

If there’s a downside to so much innovation in a single package, it may be that old pelican pilots feel a little lost climbing into a Columbia for the first time. (New-generation aviators, brought up in the age of computers, will probably feel right at home.) The familiar round gauges are gone—most of them, anyway. Like every manufacturer that has embraced glass panels, Columbia offers three two-inch backup instruments on the far left. The side stick feels comfortable, but unfamiliar at first. You can’t help thinking the airplane check-out will be short—the Columbia flies conventionally—but systems familiarization will require more time.

In fact, the adjustment process isn’t nearly that tough. The side stick falls readily to hand (though don’t try flying it with your right hand from the left seat), the PFD/MFD digital instrumentation becomes familiar faster than you’d imagine, and switch and system controls are located logically.

The Columbia makes friends quickly. Push the power up for departure with the flaps set at the 12-degree takeoff position, and the big Continental rushes you down the runway for liftoff in less than 1,000 feet of runway. With 310 hp on tap, the airplane scores an easy 1,200 fpm uphill, and even without a turbo out front, you’ll typically see an 8,500-foot cruise altitude in less than 10 minutes.

Fifteen years ago when I flew with Lance Neibauer in the then-new, world-beater, prototype Lancair IV, I reported that stall characteristics were “a little abrupt.” In contrast, the stall on the Columbia 350 is practically nonexistent. Just for fun, I tried a full series of stalls: dirty and clean, power full on and full off, wings level and banked to 45 degrees. No matter what I did, the airplane refused to get mad at me.

In fact, for the power-off checks, I brought the side stick straight back to the aft stop and held it there for a full 30 seconds. The Columbia responded with little more than a gentle hobbyhorse pitching up and down with no tendency to roll off on a wing. It was apparent I could have mushed all the way to the ground under good control.

At the opposite end of the envelope, Columbia lists the 350’s max cruise under optimum conditions as 191 knots. That’s obviously with everything against the stops, and while most pilots don’t buy fast airplanes to fly slowly, the rising cost of avgas is causing many of us to rethink our attitudes about using high cruise. A more likely scenario would involve a 60% to 65% setting that would net more like 170 to 175 knots in exchange for about 14.5 gph.

Because the 350 carries 98 usable gallons, range is substantial, especially at reduced power settings. Using the setting above, you could plan on six hours plus reserve between pit stops, worth probably 1,000 nm. That means a pilot with a need to travel the lower U.S. from coast to coast could probably do so in one long day with a single fuel stop, especially if flying eastbound with prevailing westerlies. Service ceiling is 18,000 feet, so the airplane can easily manage 15,000-foot cruising altitudes if necessary. At even lower power, Columbia suggests the 350 can range 1,300 nm nonstop.

The 350 maneuvers easily, but don’t let the side stick delude you into expecting F-16 response. Control forces are heavier than you might expect, though unless you’re flying tight formation, you won’t have reason to complain. The concept is that you can merely lay your forearm on the side rest and simply move your wrist to roll or pitch the airplane. In fact, you’re more liable to need your entire arm, but forces aren’t so heavy that you’ll notice them in normal operation.

Following the flight at Bend, I spent about 25 hours in a Columbia 350 with passenger Rachel Youngberg for an extensive three-day formation photo shoot over the Sierra Nevada, Lake Tahoe, San Francisco, Los Angeles, Las Vegas, the Grand Canyon and Monument Valley. The airplane proved a capable formation mount, relatively easy to slide into position a few feet from the photo platform. Better still, it was an imminently comfortable machine in which to spend 12 hours a day.

Landings are undemanding and satisfying if you’re simply awake. Ninety knots is the normal approach speed, and Columbia recommends short-field speeds of no less than 80 knots with a full 40 degrees of flaps. Judging the flare isn’t much of a challenge. The airplane eases onto the ground with a minimum of fuss, especially if you use the twin technique of powering down at the flare rather than coming back to idle at the key position.

Pricing starts at $378,900 for a standard 350 with Avidyne Entegra and ranges to $485,900 for a Garmin G1000-equipped 350 SLX with all the options: TAWS, Traffic Watch, Precise Flight SpeedBrakes, Bose headsets, automatic air-conditioning, oxygen, Oregon Aero seats and an E-Vade anti-icing system. The latter is intended for inadvertent icing encounters only. The Columbia 350 isn’t approved for operation in known icing.

The 350 SLX also includes Garmin’s attitude-based GFC700 autopilot with flight director and control wheel steering. The new autopilot is the heart of the G1000 and provides features normally found only in high-end corporate jets. The system accepts inputs through its own alphanumeric keypad and is capable of generating either precise vertical rates of climb and descent or accurate forward airspeeds in up or down mode. In the Columbia 350 application, the GFC700 is preloaded with optimum Vy, Vx and cruise climb speeds.

Essentially the same autopilot is installed in the improved Diamond DA40XL and Beech’s A36 Bonanza, and one wonders how long it will be before it begins replacing S-TECs and Honeywell products in G1000-equipped Cessnas and Mooneys. It seems virtually everyone is jumping on the Garmin bandwagon these days.

In a similar sense, many pilots are jumping on the Columbia bandwagon. The entire Columbia program was put in jeopardy following 9/11 when funding dried up and company president Bing Lantis was forced to look overseas for additional cash. New financing is long since in hand, and Columbia is set to challenge the new big five: Piper, Cessna, Beech, Diamond…and especially Cirrus.