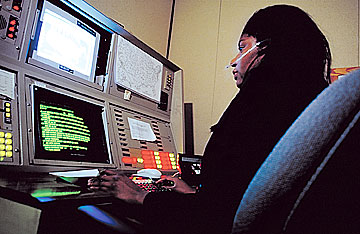 Pilots and air traffic controllers share a unique relationship, a mutual trust and understanding that supports the modern system of flight. Virtually every time a pilot climbs into the cockpit of an airplane, he or she engages in some sort of verbal exchange with the ATC environment.

Air traffic controllers can be divided into three primary categories: tower controllers, air traffic specialists (FSS briefers) and en-route controllers (Center and Terminal Radar Approach Control Facilities, otherwise known as TRACON ). We interviewed controllers from each group to ask for their help in allowing pilots to take greater advantage of the system, and here’s what they said.

Flight Service Stations
Alex Cisneros is a flight service specialist at Montgomery AFSS (automated flight service station) in San Diego, Calif. As a specialist, he feels it’s most important to “adapt to every situation and every pilot’s needs.” He gauges his briefing based on the experience of his caller. If a pilot calls him, describes what he sees on various weather charts and asks for some greater interpretation, Cisneros will respond differently than he would to a pilot who identifies himself as a student who seems a bit nervous and unsure about how to ask for a weather briefing.

Cisneros also notes that pilots don’t call in only for weather briefings or to file flight plans, but sometimes they just ask questions. He welcomes these calls, since any clarification he’s able to provide will create a safer, more informed pilot. “My job isn’t to discourage you,” Cisneros says. “My job is to get you from point A to point B safely, and that’s what I try to accomplish.”

With that in mind, Cisneros offers the following tips.

1 Initiate flight planning by calling the Flight Service Station to request a standard weather briefing. Get the big picture and decide whether the flight is a go or no-go based on the weather, then closer to departure time, call in for an abbreviated briefing.

2 If you’re going on a longer VFR flight, file a flight plan and ask for the frequencies on which to open and close. Flight Service has these frequencies readily available and will provide them when asked.

4 DUATS is a great tool, but it shouldn’t be your only tool. Nothing can replace an interactive briefing with a specialist.

5 Visit a flight service station, see what they do and meet the specialists. “Operation Take Off” is a monthly event held at many flight service stations that offers an introduction to the AFSS and previews the services available to pilots. This service is back in action following a brief hiatus after 9/11.

6 Utilize Flight Watch (122.0) for en-route weather briefings and to give pilot reports.

Patty Kast, another briefer at Montgomery AFSS, is a recently licensed private pilot. With the perspective of a student pilot in her not-too-distant past and having been on both ends of the microphone, Kast has a unique outlook and additional helpful suggestions for pilots.

7 Don’t get locked into a particular forecast, but utilize an array of weather resources to get the big picture. Know when each forecast is updated to receive the most pertinent information.

8 Wait until five minutes after the hour for a weather briefing. It will be far less crowded than on the hour and you’ll have the most current information.

9 Use pilot reports—provide them and consult them.

12 Close flight plans. Although this is continually stressed, between six and 12 flight plans per AFSS are not closed on a daily basis.

Terminal Radar Approach Control Facilities
Pat Moran is an air traffic controller and vice president of the Southern California TRACON facility. He’s also a representative of the ATC union, NATCA (National Air Traffic Controllers Association). As a pilot and controller, Moran is passionate about aviation and the services his facility provides. Here are some of his tips for pilots in a busy TRACON environment.

13 When receiving VFR flight following, listen for traffic reports and respond to the advisories. Failing to respond leaves ATC wondering if the transmission was ever received.

14 Don’t hesitate to say “Slow down” or to ask a controller to repeat an instruction. Controllers want to make sure that pilots understand their directions, and if slowing the pace or repeating a phrase will help, then by all means, ask.

16 Get ATIS before transitioning to your destination airport’s airspace, and let the controller know you’ve picked up the most current information. It’s perfectly acceptable and advisable to ask a controller for permission to go off frequency momentarily to pick up ATIS if necessary.

17 Plan ahead—know the airspace around and through which you plan to fly and know how you’re going to transition to that airspace.

19 Use a minimum amount of words when communicating and remember to provide the necessary information: who you are, what you are, where you are, where you want to go and what your service request entails. Once the initial call to ATC has been made (“So Cal, Cessna 123”) and ATC has responded (“Cessna 123, go ahead”), then proceed with your location and request (“Cessna 123 is a Skylane over the Queen Mary and would like flight following to Fullerton”).

20 Maintain open lines of communication and don’t be afraid to ask questions or make requests.

Tower Facilities
Don Bohr is the tower chief at Hawthorne Airport in Los Angeles, Calif. He has been a TRACON facility controller and a pilot, and currently works under one of the busiest airspace systems in the country. Bohr maintains that air traffic control is a cooperative venture.

Says Bohr, “I have a job to do, and so do the people who work with and around me: It’s the safe, orderly and expeditious flow of aircraft. In order for us to do our job effectively, [pilots] have to know what [their] job is to do it effectively…flying an airplane is not like getting into a car.” Bohr offers some insight toward facilitating this effective working relationship in a tower environment.

22 Don’t ever assume you know what a controller means; instead, always ask for clarification if something doesn’t make perfect sense.

23 Reporting points—call when you’re directly over the point. This means when you can see the intersection, refinery or park below the airplane when looking out the window, not when the point becomes visible over the cowling. This will help the controllers sequence traffic more accurately.

24 Become more aware of your surroundings; an airport traffic pattern can get extremely busy. If a controller says, “7AA, you are number three following a Cessna,” make sure to spot both airplanes in the pattern before making the commitment to land.

25 If you’re unfamiliar with the area or if you’re a new pilot, tell the controller; they’ll speak slowly and help you feel more comfortable with the new environment.

26 First impressions are VERY important. Both pilots and controllers form impressions of each other with the first transmission. Take pride in representing yourself and think briefly about your phraseology before keying the microphone and talking to the controller.

This relationship between pilots and ATC exists to be maintained. Learning what we, as pilots, can do to help make life easier for ourselves and the men and women behind our mics will only enhance this development. Even though we have busy days, it’s always worth the few extra minutes to get a quick briefing from a controller, to ask questions when something is unclear and to say, “Thanks a lot for the help.” It goes both ways.