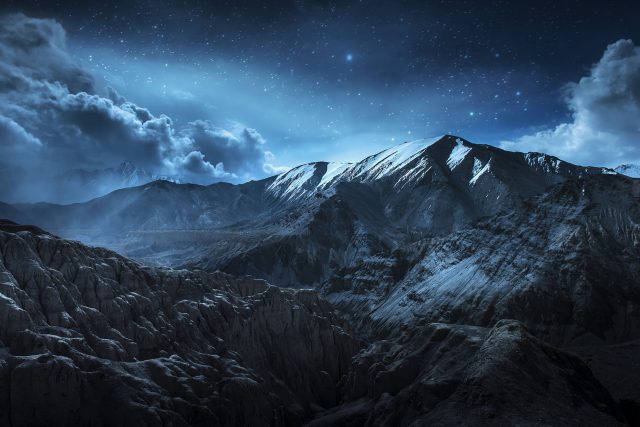 If you held an FAA private pilot certificate for six months, didn’t have an instrument rating, and had a total flight time of just over 303 hours with only a couple of hours of instrument experience, would you undertake a night flight over mountainous terrain in deteriorating weather conditions? I thought not. Yet I’ll bet you wouldn’t be surprised to learn that there are pilots who would do such a thing. The NTSB recently released its report about one pilot who did, and it doesn’t have a pretty outcome.

The airplane was a Cirrus SR22, which crashed on September 15, 2017, near Glenwood Springs, Colorado. It had been flying from Fort Collins-Loveland Municipal Airport (KFNL) in Colorado to Canyonlands Field Airport (KCNY) in Moab, Utah. The pilot and all three passengers were killed. The airplane was owned by a company in Fort Collins and was being operated by the pilot as a Part 91 personal flight. The airplane had taken off at about 7:20 p.m. Mountain Daylight Time. The accident occurred at about 8:10 p.m.

The SR22 was manufactured in 2007. At its last annual inspection on May 1, 2017, the total airframe time was 1,468 hours. The four-seat, low-wing airplane had fixed tricycle gear and was powered by a Continental IO-550-N engine rated at 310 horsepower. Specifications for the SR22 line show a maximum operating altitude of 17,500 feet, a maximum cruise speed of 183 knots true, and a useful load of 1,331 pounds. The payload drops to 966 pounds when it’s fueled for a three-hour trip with a 45-minute reserve. A direct flight between KFNL and KCNY would have covered about 242 nautical miles. The airplane was equipped to receive XM satellite weather information, including NEXRAD weather radar images. It also had the Cirrus Airframe Parachute System (CAPS), which could be deployed in an emergency to create a survivable descent. In a February news release, Cirrus had said the system was responsible for saving 170 lives.

An area forecast issued mid-afternoon and valid for the time of the accident called for isolated thunderstorms with tops to FL 360. Trace to moderate icing was forecast for the area near the accident site.

According to the U.S. Naval Observatory, sunset near the accident site was at 7:17 with no moon visible at the accident location at the time of the accident.

According to members of his family, the pilot intended to depart in daylight at about 3:30, but he got delayed by a business matter, thus the 7:20 p.m. departure.

After departure from KFNL, which is at an altitude of 5,015 feet, the airplane took up a southwesterly heading toward Moab. About two minutes after departure, the pilot radioed Denver Departure and said, “We’d like to, uh, pick up flight following. We are leaving Fort Collins, and we’d like to pick up flight following to Canyonlands, kilo charlie november yankee.” The Denver controller responded, “Maintain VFR, squawk zero four zero four.” The pilot responded with the squawk code. About 25 seconds later the controller reported, “Radar contact five miles to the west of Fort Collins. Denver altimeter two niner eight zero. Say type aircraft.” The pilot replied that he was flying an SR22. At about 7:24:28, the controller asked the pilot to “reset transponder, squawk five one three two, please.” The pilot responded with the new transponder code.

At 7:26:14, the controller radioed, “Just be advised there were reports of, uh, some light to moderate chop, should be pretty smooth out there for you.” The pilot thanked the controller.

At 8:03:58, the controller radioed the pilot to switch to a new frequency. The pilot immediately replied with the correct frequency but waited almost a minute, until 8:05:02, to check in, saying he was at 11,500 feet. The controller gave a new altimeter setting of 30.04, and the pilot again immediately responded with the correct setting. Radar data showed that at around 8:04, the airplane was about 10 miles northeast of Glenwood Springs and made a turn to the northwest. It continued toward the northwest for about 12 miles.

Investigators learned that a passenger had been sending text messages to her mother during the flight. There were three messages. The first, at about 7:34, read, “In the air.” The second, about three minutes later, said, “Over Granby.” The third, at about 8:08, said, “Taking long way around, lots of weather, keep you posted.” That suggests that the turn to the northwest a couple of minutes before the text message went out was to divert around weather.

If the pilot was looking at a NEXRAD weather radar mosaic, he really needed to keep in mind that those images are not the equivalent of real-time airborne weather radar. In fact, the NTSB previously has warned pilots that because of a time lag in processing and transmission, they should not be relied on for storm cell avoidance. Old images can tell you where weather was, not where it is. It should be noted, however, that the NTSB did not determine precisely what the pilot may have been looking at for weather avoidance. With no moon on a dark night over mountainous terrain, you’re not likely to see much out the window unless there’s a lightning show going on.

The plane struck a rocky, tree-covered area at about 10,800 feet MSL. It hit on an easterly heading of about 75 degrees. The airplane broke into numerous fragments. There was a post-impact fire.

At about 8:13:48 the controller radioed the flight that radar contact had been lost and to say altitude. There was no response, and the controller tried again, but there still was no reply. It wasn’t until family members reported that the airplane had not arrived at KCNY that a search was initiated. The wreckage was located by search and rescue teams at 11:37 the next morning. Based on the way trees were cut, the bank angle at impact was calculated to have been about 34 degrees right wing low. The airplane’s parachute was not deployed. The rocket used to shoot out the parachute was not fired.

Because of snow and terrain conditions, it wasn’t until June 28, 2018, that the wreckage could be recovered. At the end of August, the NTSB, along with representatives of Cirrus and Continental, examined the wreckage. Their examination failed to find evidence of mechanical malfunctions or failures that would have precluded normal operation. The airplane had a digital autopilot, but the data card that might have told investigators something about what the airplane was doing before it crashed was damaged, and data could not be recovered.

Investigators interviewed one of the pilot’s flight instructors, who told them that he was the one who signed off the pilot for his private pilot check ride. The pilot had about 200 hours at the time. The instructor knew that the pilot had taken a course in the Cirrus and recently completed a mountain flying and high altitude operations course sponsored by a regional pilot’s association. The instructor said that the pilot’s wife had taken a course on how to use the airplane’s radios, how to use the autopilot and how to deploy the parachute if needed.

The instructor said that he sometimes struggled to get the pilot to understand that you don’t get second chances when you make mistakes in flying. He recalled conversations with the pilot about the risks and hazards of mountain flying at night. The instructor said that after air traffic control lost radar contact with the airplane, he got a phone call from the FAA because his name appeared on some flight plans that had been filed for the tail number. He said that he then called the Air Force and Civil Air Patrol and Garfield County Sheriff to get search efforts started.

An NTSB weather study found that a weather station at 10,604 feet MSL on Sunlight Peak, a mountain located about 16 miles south of the accident site, at about 8:08 p.m. reported the wind from 240 degrees at 12 knots gusting to 24 knots, visibility ½ mile in fog, an overcast ceiling at 200 feet AGL, temperature 2 degrees C., and a dew point of 1 degree C. There had been a thunderstorm recorded in the vicinity about 18 minutes before.

Satellite images indicated that a few minutes after the crash, the cloud tops over the accident site were at about 22,000 feet. Other data indicated a small area of rime icing existed at around 12,500 feet MSL.

The Safety Board concluded that the flight likely started to encounter intermittent instrument conditions about 30 minutes after takeoff and then solid IFR about three minutes before the crash.

The probable cause said the accident was due to the non-instrument-rated pilot’s inadequate preflight weather planning, his decision to depart into forecast instrument meteorological conditions along the route of flight, and his continued visual flight into instrument meteorological conditions, which resulted in spatial disorientation and a subsequent loss of airplane control.

What the NTSB did not discuss was a couple of practical things that I wonder about, and maybe you do, too. There was no discussion of the use of supplemental oxygen. While people’s bodies do adjust to living at high altitudes in places like Colorado, high-altitude night flight can be physiologically demanding. If the pilot was becoming disoriented and had any awareness that things were not going well, why didn’t he switch on the autopilot and let it get things straight and level again? If he knew he was encountering weather he shouldn’t be going near, why didn’t he ask for help from a controller? And, most of all, if he realized he was getting disoriented and confused, why didn’t he pull the power and fire the parachute?