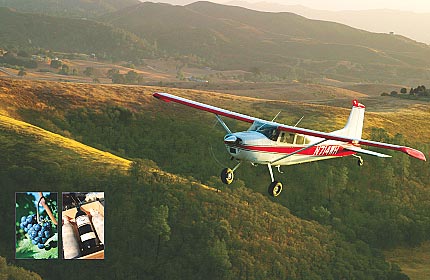 John Trefethen, whose name graces one of Napa Valley’s premier wineries, is standing inside an oak barrel room of his historic winery on his 600-acre vineyard. Neatly dressed in jeans and a mustard-yellow silk shirt, Trefethen is regaling his listeners with some hangar talk about a crop-duster that used to land on the one-lane entrance road when the winery started in the early ’70s. In those days, Trefethen was flying his Cessna 182 out of the Napa Valley Airport 10 miles away, causing the crop-dusting pilot to scratch his head.

“Why do you go all the way down to the airport?” he asked. “Why don’t you land here?”

The refined-looking Trefethen is a very precise sort of man who likes to do things by the book, for the most part. So he replied, a bit incredulously, “This is pretty narrow. And there are trees at both ends.”

So for the next few years, Trefethen landed his 182 and then his Bonanza on the 1,800-foot road, although he couldn’t take off in the latter anywhere near full gross weight. “I had a line painted midway down the road,” he recalls. “If a car turned onto the drive before we got to the white line on takeoff, we’d stop. But if a car came in after we got to the white line, we’d keep going. So many times, you’d see these cars turn off, thinking they had just turned onto a runway. To land, you had to drop in over the top of the big oak trees, and I would do it perfectly, but then, I’d go to a 9,000-foot runway and blow the landing. It was too easy.”

Before long, Trefethen had graduated to twin engines that were too big and fast to land on the road. Then, Napa Valley turned into a top tourist destination and more cars appeared. But, as he clearly illustrates, flying and winemaking have always had a close relationship with each other—and never more so than now. With commercial travel getting more difficult and vintners spending more time on the road because of increased competition from a grape glut that has caused a three-year price slump, piloting their own planes is an advantage.

“The airplane allows me to get to a lot of markets and meetings easily and quickly so I can do more of them,” says Trefethen, who has flown his 1982 Aerostar to Portland, Oreg.; Seattle; Sun Valley, Mammoth, San Diego, Los Angeles and Palm Springs, Calif., in the last three weeks. “Selling is a big part of what we do now. It wasn’t always that way. It’s much more intense today. It’s a relationship business, very much so. The idea of going down to L.A. and the three hours it takes to get to the San Francisco Airport for one day—I don’t like to do it. Checking in and going through security takes way longer than the flight itself. Trips that I wouldn’t have to take before, I take now in the Aerostar because I’ll do anything to avoid flying commercially.”

He still winds up flying about 50,000 miles a year on one of the major airlines—including trips overseas or east of the Mississippi—while logging about 200 hours a year in his Aerostar, which he has owned for four years and which he keeps at Napa Valley Airport. “I love to fly it,” says Trefethen, who has 4,500 total hours and a multi-engine instrument rating. “It’s absolutely a pilot’s airplane. It’s very responsive and quick. I really enjoy seeing mountains and deserts and sunsets. On a commercial flight at 35,000 feet, you don’t see anything. But flying my Aerostar fulfills my need to combine getting somewhere and being able to enjoy the ride.”

Since flying your own plane is the ultimate Napa Valley capitalist’s tool, it’s not surprising that more and more vintners are piloting their own planes. Larry Turley of Turley Winery and Bo Barrett of Chateau Montelena Winery are no exception. Ten years ago, the two realized how useful flying could be to their businesses. So they started sharing ownership on a Beech Debonair, which spawned into a decade-old aircraft partnership with each other.

“We both wanted to get back to flying,” says Turley, who got his private pilot’s license in 1978. “Our wives thought we had another mistress because we went to bed every night with Trade-A-Plane. It’s been a great partner. We haven’t had any disagreements or conflicts.”

Today, Barrett and Turley’s current airplane, a refurbished Cessna 210 festooned with logos from both of their wineries, sits and glistens in the bright sunshine outside its hangar at Santa Rosa Airport, Calif. Barrett, whose white sneakers are practically purple from wine stains, is dressed in a 1999 Oshkosh T-shirt and blue fleece vest. Turley sports ostrich-skin cowboy boots, a beard and a long-sleeve, striped shirt. They’re swapping stories about the 433 hours that they have put on their bird since taking delivery of it in March 2002.

“We use it almost exclusively for business,” says Barrett with a sparkle in his eye. “Let’s just say if you go on a ski trip to Sun Valley, you just make sure you call on some accounts there.”

All kidding aside, flying their own plane makes their job a lot more efficient—and fun. “It’s a tremendous business tool for us,” adds Barrett. “If I have to do a dinner at Santa Ana, Calif., or Portland, I’ll stay at the winery ’til about three o’clock and fly down. If I was driving or going commercial, I’d have to miss a whole day of work. And we sometimes have to take cases of wine, which we wouldn’t want to check in.”

They also have other vineyards outside Napa Valley and feel compelled to visit them, especially when it’s harvest time. “You have a one-year production hinging on a one-day decision,” notes Barrett. “You can’t go back and put them back on the vine. The growers are always saying they’re riper than they are. The biggest decisions are when you pick them and when you press them.”

Turley, who undergoes IFR training six times a year with Barrett, adds: “Real winemakers go to the vineyards. You want to make sure that they’re perfect. If you had to drive, you wouldn’t go as often. I’m not selling nuts and bolts, so I don’t have to go to a store. Most of my clients are restaurants. So anywhere I go, I can visit accounts and clients. I do the occasional ‘winemaker’ dinner. I did one in Aspen, Colo., so we flew there. It’s quite an approach.”

Turley is a true Renaissance man, as his list of past deeds indicate. Up until his retirement seven years ago, he saved lives as an ER physician for 24 years. And during that period, he also found the time to become one of Napa Valley’s premier vintners. He started the famed Frog Leaps label in 1981. He sold the label in 1993, but kept the 20-acre vineyard to start his eponymous wines. He also grows grapes in Paso Robles, Calif., where he built an airstrip.

“It’s a killer drive in a car,” says Turley. “But it’s a beautiful hour-and-10-minute flight.”

Next to the practical uses of piloting a plane, the view from up in the air allows Turley to truly enjoy his vineyards. The reason he bought the vineyard in Paso Robles, in fact, is because of the perspective he got from first flying there.

“Everything becomes clear as soon as you’re up,” he says. “You could drive the same route over and over, and then, one day, you fly over it and it’s a completely different viewpoint. I thought, Oh, now I get it. So that’s why you can grow grapes here. There’s a gap in the mountains there; that’s where the fog comes in. This would be a great vineyard here because it’s right in line with the afternoon fog, so it’s not so hot. Every great grape-growing region in the world has maritime influences. You need heat, but you want it moderate.”

The reason why flying and winemaking complement each other is because the two are so different. They’re both knowledge- and labor-intensive, but that’s about all they have in common. Flying is immediate; you know exactly how you stand, or should, while en route. In contrast, there are several years between sowing grapes and sipping them as wine.

“You have to have a very long-term view in winemaking,” notes Trefethen. “It’s the opposite of flying. There’s a finite time you focus and, boom, it’s done. The span of time from which we plant the vineyard until the time we get a product out into the market is six years. Flying takes planning, too, but it’s very focused and, then, it’s over.”

Although Turley calls wine “bottled poetry” and flying is, in itself, poetry in the air, perhaps wine and flying should be likened more to wine-drinking than poetry. After all, both of them can be pretty intoxicating.