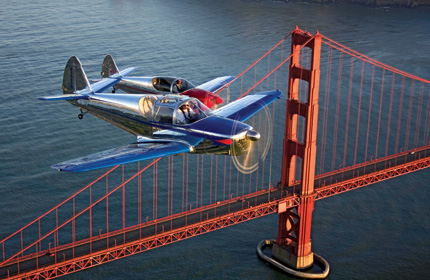 Formation flying is a dangerous and, for me, compellingly beautiful and engaging experience. It requires a significant amount of discipline, dedication and practice, and should never be attempted without considerable ground and flight training. My experiences and training have made me firmly believe that formation flying is primarily about the proper attitude toward safety, in addition to training and discipline.

In the August 2009 issue of P&P, I discussed some of my techniques for flying wing; in this installment, I’ll focus on the challenges of flying the lead position.

Lead Is A Cognitive Job
As lead, you’re responsible for all aspects of the flight from preflight briefing to managing all in-flight operations and the postflight debrief. This isn’t to say that lead should be an autocratic dictator when it comes to setting goals and objectives for a fight, but once the group has decided on its objectives, it’s time for lead to step up and manage the process going forward.

Lead is responsible for doing the thinking and planning for the formation. In the air, lead is expected to be a smooth and consistent platform for the wingmen to fly off of. Lead should assess the skill levels of the wingmen in the flight, and be able to sense what kind of day each of the wingmen are having to gauge whether they can be helpful, keep the entire formation within their capabilities and safely complete the mission.

It’s generally agreed that lead should be the best pilot in the formation and should definitely have the most formation flight experience. A lead pilot must have excellent wing skills so that he or she can understand and anticipate what the wingmen will need for a successful flight.

Pre-Formation Flight Planning
A formation of airplanes is a complex thing to be responsible for. Not only are there multiple pieces of machinery but also multiple personalities with different capabilities. The lead pilot has to provide a tight enough framework for the flight to operate in so that everybody has a clear plan and can relax and enjoy the flight.

The formation flight briefing is usually conducted by the lead pilot and consists of all aspects of the flight profile such as weather, airport and communications information; pilot positions within the flight; potential issues such as dissimilar airplanes in formation (taxi routes, type of takeoff and join-up procedures); flight route; the maneuver profile; all potential landing operations; and emergency procedures (including lost-sight procedures). Communications are extremely important for safely conducting a formation flight; this must be known and understood by all flight members. If a flight member has formation flying experience, but lacks a thorough knowledge of the standards that are to be used, then the person has no business being in the flight and should remain on the ground until he or she is familiar with all operating procedures. 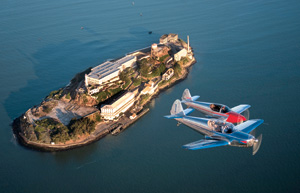 A good ground briefing includes all of the previously mentioned items and a review of all the pertinent standards that apply to the specific flight. Plane & Pilot and Pilot Journal photo flights, particularly when flying some of the new light jets that are entering the market, can be an extreme example of briefing dissimilar planes in formation. Flying a jet at the very low end of its operating speed range, with seemingly almost no drag, off of a Bonanza is a challenging experience that deserves considerable discussion about join-ups, each maneuver in the flight profile and especially outs. We review all commands and procedures to try to ensure that no surprises raise their ugly heads during the flight.

To me, one of the best safety planning strategies is to perform a ground briefing and discuss as many potential issues as possible before taking off so that everybody you’re flying with develops a similar problem-solving approach. If members of a team share similar approaches to solving problems, then they’ll become predictable in their reactions to situations. If a team member hasn’t done this kind of foundation work, then he or she might seem erratic when “stuff” happens. I believe that members of the Collaborators—the aerobatic formation team that I’m a part of—have spent about twice as much time on the ground (talking about potential problems that we could encounter) as we’ve spent flying.

Lead Runs The Formation
From the moment the team gets to the airplanes, the formation flight has started and lead runs the operation. Lead’s first challenge after startup is to taxi the team to the run-up areas. To do this, you must have a very good idea of how large the formation is (so that everybody can fit into your selected run-up area) and how fast it can safely move on the ground.

Once in the air, lead is the one giving commands. Lead needs to be clear and decisive; if lead isn’t, then the wingmen will become confused and frustrated, and start to ponder what should be going on instead of what they need to do to play their parts. As John Bowman, lead pilot for the Red Baron Stearman Squadron that I was a part of, always said: “A thinking wingman is a liability.” A personal example of not being completely clear happened on a recent four-ship flight of Globe Swifts that I was leading. Even after giving the signal to my wingmen to follow my break from an echelon formation at four-second intervals, my departure from the flight was so gentle that the wingmen didn’t know if I was leaving or initiating a turn. I confused the flight and they started to follow me into the turn.

There has been a lot of focus on cockpit resource management (CRM), and there’s an analogous component that I call formation resource management (FRM). Lead doesn’t have to do all of the tasks associated with the flight; he or she can assign wingmen to do things like calling Flight Watch to get the en route weather or looking at the sectional chart to identify alternate airports in case the weather closes in. Lead can also consider reducing the number of tasks that happen concurrently. Anybody who has ever had lead cross under an element while calling for a frequency change and starting to roll out of a turn will know what I mean. It’s much safer and more comfortable to anticipate the need for all of those things in advance, and to plan to execute them one at a time.

In the same way that it’s wise to consider all of the “what ifs” as you fly solo, it’s also prudent to prepare for any in-flight issues that can occur with multiple airplanes in the formation. The possibility of a mechanical issue is not only greater, but so is the loss of situational awareness from one of the pilots in the group. If a minor mechanical issue (like lost communications) occurs, your standard procedures should allow you to communicate and complete the flight in an orderly fashion. If an emergency or major mechanical problem happens, then you need to do whatever you can to help the flight member having the emergency (e.g., helping to select a reasonable landing or bail-out location, flying cover to aid in communications, or identifying obstacles and hazards). It’s something that should be covered in brief, and one wingman to help the crippled airplane is probably better than a crowd (because of the maneuvering space needed for the crisis). Situational awareness problems can range from wingmen on the wrong frequency to outs, out-no-joys and lost wingmen. I’ve seen instances where a wingman starts to fool around on a cloudy day cross-country and can’t reacquire the rest of the flight. You have to identify a way to ensure separation, most likely by altitude, and then work with the wingman to rejoin the flight.

Flying Technique
The lead pilot needs to employ flying technique to be a predictable and consistent platform for the rest of the formation to fly off of. One basic concept is to fly formation on the earth’s horizon and make all of the same continuous and small corrections to be stable and smooth. If you’re looking at a point on the horizon, you’ll be able to use all flight controls to immediately return to your flight path whether turbulence bumps you up and down, or yaws you left and right. If you fix these flight path deviations right away, then your wingmen won’t have to decide if you’re starting a turn or if, maybe, you’re just going to fly one wing down for a while.

Wingmen have needs that lead has to accommodate. A power advantage needs to be available for wingmen to make corrections and fly on the outside of turns. A slow and smooth roll into and out of turns is important in order for wingmen to look good and stay safe. It’s almost impossible to roll too slowly, especially when you have more than two planes together. When the air is bumpy, it’s sometimes helpful to keep bumping or nudging the stick to continue a smooth roll rate.

Postflight Debrief
Lead usually runs the postflight debrief, where the focus is on reviewing and discussing issues on the flight so that everybody continues to develop skills and to enhance safety. It’s important to remember that everybody will make mistakes on the flight and that the issues discussed aren’t personal. To that end, all flight members should be sure to check their egos at the door. Debrief should thoroughly address all significant flight issues while maintaining a respectful atmosphere and some amount of tact. As discussed earlier, this is an important opportunity for all flight members to learn to problem-solve in the same way.

Resources & Training
The FAST website (www.flyfast.org) is an excellent resource for things like briefing cards and training material for formation flight standards. If you want to become a great lead pilot, you’ll need to spend a lot of time flying wing and perfecting those skills. Then, spend a million hours or so on the ground thinking about what kind of issues can pop up with a team, and what are the best ways those issues can be resolved. A great lead is a smooth and consistent pilot who’s knowledgeable, decisive and clear and has a fair amount of tact.