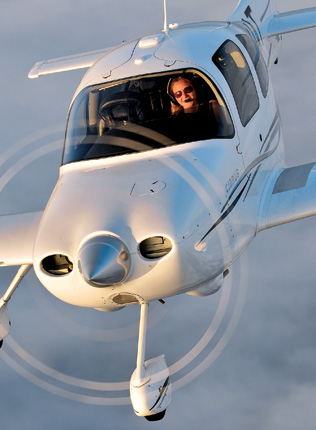 Used to be, when my formation instructor said, “You’ve got it,” all of a sudden, the lead airplane would go bouncing up and down, me trying to hang in place. Of course, the leader was steady as steel, it was my fist clutching the stick, jerking it around, that made it seem that way. Such fun to bring off a good join-up, sliding up the inside of the funnel to stop where one belongs, on the wing.—Richard Bach, via e-mail

As is the case for many pilots, my student solo had been my most memorable flight, ever. What could be more exciting than the first opportunity as pilot-in-command to return an aircraft safely to earth? Well, one afternoon this April, I found out. “You’re ready. You’ve been ready,” suggested Bill Stein, who has more than 3,000 hours of formation flight. “You should fly off my wing.”

Any formation pilot will tell you, and it sounds a little cheesy, but it’s true: Two airplanes acting as one is a beautiful thing. I was nervous (but elated!) when we launched for my “formation solo” as wing, a culmination of the in-depth formation training I had previously received. As I held position in a Cirrus SR20 on the right wing of Bill’s Globe Swift, my entire world became his polished aluminum wings (my new horizon) and confident voice (“Wiggle your toes! Breathe!”). In spite of a piercing light from the low sun, the need to make constant control inputs, and a tendency to forget to inhale and exhale, a tranquil harmony ensued, something special experienced by anyone who has flown as part of a two-ship. Definitely, my new most memorable flight! But as thrilling and tempting as formation flying is, it’s also dangerous. In his article describing techniques for flying wing, Bill stresses the importance of getting dual instruction before attempting this supremely gratifying (and highly addictive) form of flying.

The ultimate serenity that one experiences while flying formation is perhaps paralleled only by soaring. Riding thermals in a glider is as pure as it gets. This month, Jim Lawrence heads to upstate New York, where the Elmira Soaring School makes power pilots better pilots by teaching stick-and-rudder skills and confronting students with the worst-case scenario: engine out. Should you ever have to face a dead-stick landing, it’s best that you’ve been there before. When a go-around isn’t possible, you want to be on your game. (Just ask Captain Sully!) Aloft in a venerable Schweizer 2-33, Jim revels in the universality of soaring: “There’s something wonderful about working lift that’s magical and creates a sense of family.”

Icon Aircraft founder Kirk Hawkins also understands that simple, pure enjoyment is the core essence of why we fly. Marc Lee and I recently visited Kirk at the company’s headquarters near LAX to learn more about the development of the sleek, amphibious A5, an LSA reminiscent of a cross between a Jet Ski, Ferrari and airplane. But missing from our conversation was an emphasis on the typical specs that most of us use to assess an aircraft: speed, range or payload. Instead, the discussion focused on product design, human emotion and the “total user experience.” As this month’s Guest Speaker, Kirk expands on his vision of revitalizing GA by bringing excitement back to flying. Flying your own plane doesn’t always have to be practical: It’s okay to like flying just because it’s fun!