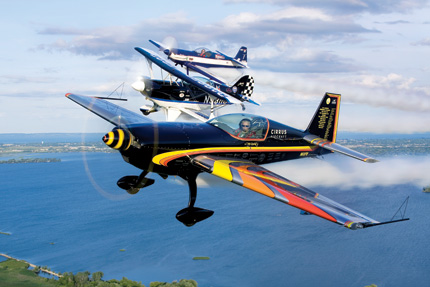 While working on this month’s Guest Speaker column, Managing Editor Pam Lee suggested that the reference to Patty Wagstaff mention that the air show star performs annually in front of thousands of spectators. Hundreds of thousands, I countered. But, we were both wrong. Patty confirmed that each year, she performs in front of millions of people. This wide-reaching impact is something that this month’s Guest Speaker, John Cudahy, president of the International Council of Air Shows (ICAS), is passionate about. At a time when general aviation can really benefit from positive exposure beyond the pilot population, the air show industry is able to do just that. John discusses what this means for all of us, and offers suggestions on how you can help.

This year, it has been an honor for us at Plane & Pilot to have welcomed a roster of interesting and dynamic guest columnists, from John and Patty to Icon Aircraft CEO Kirk Hawkins and retired astronaut Hoot Gibson. We’ve got an equally varied lineup planned for 2010, and if there’s someone you’d like to see in an upcoming issue, drop us a line with your suggestion at [email protected].

Another passionate aviator is entrepreneur Randy Schlitter, founder of Rans Designs. His father was a crop duster and professional pilot, and although Randy almost went that direction, he instead opted to follow his love of riding bicycles and designing airplanes. The elder Schlitter always looked a little askance at Randy’s light aircraft designs, but when he was near the end of his life, Randy took him for a ride. He had to lift his father into the cockpit, but as soon as they started taxiing, Randy recalls, “My dad came to life and flew that airplane like he was a young man again. When we landed, he looked at me and remarked, ‘That’s the best one yet, son.’” This year marked the 25th anniversary of Rans Aircraft, and LSA Editor Jim Lawrence takes us to Randy’s factory in Hays, Kans., where he flies two LSA by Rans—the all-metal, low-wing S-19 and the S-7 Courier taildragger.

Another LSA that Jim flies this month is the Breezer II, a metal airplane built in Germany. The Breezer is a traditionally built, solid airplane that quietly holds its own against any of the bigger sellers, and Jim immediately took a liking to its solid qualities. During his photo session, the strong lines of the aircraft design reminded Jim of a 1950s-era fighter jet.

For your chance to have one of your photos published in an issue of Plane & Pilot, visit Favorite Flying Destinations. There, you can sign up as a user and upload photos of your airplane and spectacular locales. We’ll print our favorites in upcoming issues!