In the sticky southern Georgia afternoon, the air was flat and heavy as we turned final for Runway 6 at KCSG. It was our last fuel stop after a long day, and we were ready to call it quits for the evening. Following my flight lead, an A36 Bonanza, down the imaginary glideslope, I flew close enough to his right wing that I could see the rivets. Out of the corner of my peripheral view, I saw the white stripes of the approach end of the runway, and we continued to descend. Landing in formation is something I have done many times. It is intense and takes focus to stay in position, and a lot of small adjustments must be made with dissimilar airplanes and when there are flaps and retractable landing gear involved. The closer you fly to another airplane, the more you share the same air (which is a trick any good formation pilot knows, so it’s easier to fly closer for that reason). Today I felt sharp. In the heavy humidity of the summer day, the windsock was hardly breathing, so I was surprised when we leveled out to land that the wake and wing-tip vortices from the Bo started moving the air, and my Extra 330SCe along with it.

As we had briefed, the Bonanza had the left and I had the right side of the runway. Just before touchdown, I tried to slow down enough to get my main gear on the asphalt at the same time as the Bonanza, but a gust of a vortice pushed me back into the air enough that I had to add a touch of power, reducing it again to get my wheels to stick. After a couple of these excursions, I started thinking: “I am working too hard. I am in no mood for this. I am tired. Let’s make this easier.” I pushed the throttle forward, smiled at the acceleration of the Extra while the Bo slid behind, leveled out to gain speed, then sharply pitched the nose up, the Extra growling for altitude. As I turned a sharp right back into the downwind, I glanced over my shoulder and saw the Bonanza on the runway when I turned a tight base and landed long, catching up to him just as he turned off the taxiway and called Ground for taxi instructions. I smiled again, a little smugly, but after a long day I deserved it—or so I thought (being cocky is not a good quality for an aviator, and we should only indulge in it on the rare occasion). Go-arounds can be fun!

Subscribe today to Plane & Pilot for industry news, reviews and much more delivered to you!

I had once flown an airshow at KCSG, so when we taxied to Columbus Aero Service, it was fun to see everyone. As we were fueling our airplanes, my lead pilot looked over at me and said, “I was really surprised to see you do a go-around!” Surprised that he was surprised, I said, “Really? Why?” “Because,” he said, “You’re a professional airshow pilot, and, you know…” What I really think he was saying is that people aren’t expecting to see go-arounds, and it’s kind of a big deal to do one. I beg to differ! Doing a go-around when I didn’t feel like dealing with my bucking little bronco at the end of a long day was the most natural thing in the world.

Aviation keeps us humble. Continuing to fight a messy landing when I was fatigued after a long day would have only been ego, and at times we all struggle to keep ego out of the cockpit. There’s no shame in a go-around. I like them. In fact, I try to be ready for a possible go-around on every approach to every landing in any airplane I am flying.

Go-arounds were pretty common when I learned to fly in Alaska. When I lived in Dillingham, a small town about 300 miles southwest of Anchorage, it was not unusual in the winter for our Western Airlines 737’s to do two, sometimes three, missed approaches before landing. The weather was often blowing snow with low ceilings, and the instrument approaches were non-precision, giving us even less margins for landing. I remember the rest of the passengers were mildly nervous, slightly entertained, and just generally glad to be on the ground on the third try and not have to divert back to Anchorage. Go-arounds were always to be expected, as winds could change, animals could be on the runway, or, when I was flying, I might just read the windsock wrong the first time.

The closest I probably came to dying on a commercial flight was in the South Pacific, where the airstrips are made of coral, often jutting out into the water alongside a line of craggy green mountains, and most of the approaches are non-precision. On this particular flight, the pilots busted their minimums and kept descending instead of going “missed approach.” For the passengers, it was only the 60-degree bank climbing left turn toward the open ocean that told us we probably weren’t landing. The “missed” was so egregious, we almost took the antenna off the terminal building (so said the people waiting for the flight, who had thrown themselves on the ground to avoid being taken out).

The FAA and EASA (European Aviation Safety Agency) have been talking and squawking about go-arounds a lot lately, and for good reason. Many Loss of Control in Flight (LOC-I) accidents happen on approach and landing, often from an unstabilized approach or failure to go around. Data shows the riskiest phase of flight for LOC-I is the take-off, but approach and landing come second.

One of the most interesting studies I’ve read is the Flight Safety Foundation’s 2017 “Go Around Decision-Making and Execution Project.” I quote from it, and the bold text is mine:

Approach and landing is the most common phase of flight for aviation accidents, accounting annually for approximately 65 percent of all accidents. A Flight Safety Foundation study of 16 years of runway excursions determined that 83 percent could have been avoided with a decision to go around. In other words, 54 percent of all accidents could potentially be prevented by going around. It is generally felt that an unstable approach is the primary cause of landing excursions. However, within this 16-year period, just over half of the landing excursions followed a fully stable approach; in these instances, the flight became unstable only during landing.

The FAA and EASA recommend being stabilized on an instrument approach by no lower than 1,000 feet above the ground and by 500 feet above the ground on a visual approach. If the approach isn’t stabilized by then, a go-around should be considered. Stabilized approaches are important and will usually result in a smooth landing (unless you’re too fast and then lose control trying to get the airplane to stick!). The earlier you make your decision to go around, the easier it will be, so stick with your decision and don’t second-guess yourself. Changing your mind will lead to destabilization and a difficult recovery (like the pilots of the airliner in the South Pacific, who should have gone around before they descended below decision height for the approach).

Why does an airplane become unstable only during landing? I surmise that it is because pilots often carry too much speed on final. This can lead to LOC as the pilot struggles to get the airplane’s wheel to stick when the available runway is running out. The FAA recommends that if winds are gusty on approach, add some speed to compensate, but no more than half the gust factor. Keeping the nose tracking down on approach to landing all the way to the level off and then flare will keep you out of trouble, but remember the recommended approach speed is 1.3 Vso.

A few thoughts about go-arounds:

Takeoffs might be optional and landings are mandatory—except you don’t always have to land the first time. If your approach to landing doesn’t feel right, the three essential actions for a go-around are:

We are reactive creatures by nature. We have to train ourselves to be proactive—acting before a situation becomes a crisis. In aviation, it’s always better to be proactive, and the only way to do that is with training and repetition. Wolfgang Langewiesche said it best in his 1944 classic, “Stick and Rudder:” “…there is much of animal training in our flight training methods…for you simply cannot go against your common sense, against your most powerful instincts, except by drill, and more hard drill.” 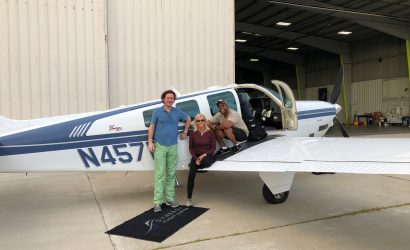