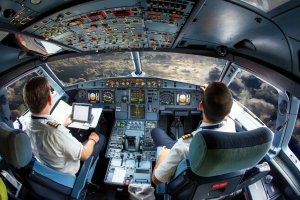 Just ahead, the windshield separated a cold, murky night from my relatively comfortable perch in the flight deck of the Airbus. As the runway lights in Boston flashed past faster and faster, I scanned the instruments while the captain, who was flying the plane this leg, had his eyes outside. “Eighty knots. Power set,” I called. As we passed 100 knots, my half of the panel went dark. My flight instruments and much of my ability to monitor the aircraft’s systems all evaporated in a flash of the screens. It took a moment to process what happened, and then I had to vocalize the situation. Because the pilot’s eyes were outside, my interpretation was his connection to the instrument panel

“Continue,” he called through clenched teeth. We were in the high-speed regime of the takeoff, where we’d only abort for something that’d significantly impact our ability to fly. Engine fire or failure? Abort. Couple of screens going out? We’re going flying. My eyes shifted to his side of the panel, where I still had plenty of information available to make my callouts.

We pulled the gear up and climbed into the night. Boston tower handed us off to departure. I ran the after-takeoff checklist, and we finally got to take a look at our predicament. The Airbus has two AC-powered buses. Bus 2 failed, having apparently shorted out. There were no chimes or bells—the takeoff inhibit function hides most failures with an aim to keep us from aborting for minor issues. An abort at high speed brings all sorts of threats. Passengers who may have forgotten to buckle their seatbelts could suffer significant injuries. Flying objects in the cabin, overheating brakes or, worse yet, a runway excursion all are valid threats. Add in the fear of customers who have just experienced a mind-numbing stop when they expected to be lifting off, and you’ve got all the potential in the world for folks to start popping the emergency exits and triggering their own evacuation in spite of having an intact aircraft with two engines running.

Between the powerful vacuum of the engine intakes and the blowtorch of the exhaust, there’s potential for all sorts of disaster in spite of whatever announcement one might make hoping to keep everyone in their seats. Even in a properly managed evacuation, statistically, someone’s going to get hurt. The inflatable slides are not playground equipment, and any time they’re put to use, there are almost always sprains and maybe even fractures or worse as heels snag on the slide, or someone tries to make the leap with a suitcase or personal belongings that should have stayed onboard.

So we were flying with a half-dark panel. The captain muttered something about how this airplane made classic British touring cars seem reliable. He was not wrong. After all, in the span of just a few hours, we experienced multiple engine failures at V1 and V2 in challenging terrain, a couple of escape maneuvers with traffic and terrain conflicts. As soon as we picked up the checklist to start working the abnormal procedures, a voice behind us disrupted the scenario. “Okay, we’ll stop it there for now,” the instructor said. “I’ve got the sim. Here’s what it’d look like if you lost both Bus 1 and Bus 2.”

Beyond the windshield, beyond the cold New England rain and clouds, there was the air-conditioned enclosure of the simulator bay at our training center. Outside, the sun was shining, and it was a beautiful winter afternoon in Florida. This wasn’t a trip from hell. It was the annual training airline pilots perform under Advanced Qualification Program, or AQP.

While some operators still use the old system of proficiency checks where the yearly check ride is as predictable as the tolling of the clocktower at noon, AQP has ushered in a degree of flexibility that pro checks couldn’t offer. I did a year or two of the old system of proficiency checks, and I can still remember much of the carefully scripted scenario: Low-visibility takeoff, climb up to do steep turns, vectors back for an approach that went missed at minimums, and an engine failure on the go-around. Single-engine approach to a miss, then another approach to a landing.

Then we did v1 cuts and a no-flap landing. It’s been more than a decade at this point, so I may have missed a thing or two, but I bet my memory of the check ride profile is more correct than not.

Much like in Bill Murray’s “Groundhog Day,” it was the same year-in and year-out. Yes, we were proficient at the maneuvers we rehearsed for the ride, but there were plenty of other failures we could have trained for and other skills that needed polishing up.

Safety reports from our company and from across the industry are the feedback that drive each year’s training objectives. Got pilots busting altitudes rejoining an RNAV STAR after being vectored off the arrival? Put that scenario into the next year’s training. How about obvious issues with basic airmanship with failed automation? Incorporate a quick VFR pattern with no autopilot, flight director or autothrust.

AQP yearly training involves elements to include Maneuvers Validation and Line-Oriented Evaluation. The MV is a series of maneuvers that are often disrupted by repositions and pauses to allow instruction and, if needed, remediation. Most of these are briefed extensively in the classroom prior to the simulator, so we’re often prepared and on the same page before the instructor’s “…and you’re flying in 3, 2, 1.” Also, there are first-look maneuvers that aren’t briefed, so evaluators can see us tackling problems outside the syllabus.

In the briefing period prior to the LOE, there’s the oral. I’ve seen various labels thrown at it, but the constant regardless of the operation is this: You’ll get grilled on memory items from aircraft limitations and emergency actions, aircraft systems and company operations or procedures. It’s usually administered as a tag-team operation where the captain and first officer take turns answering questions. This is the one part of AQP where you hope your sim partner doesn’t call in sick, or else you get the entire test all to yourself. The check airman will stick to the script for the most part, but if you seem a little soft on an answer, prepare for him or her to dig a little deeper.

This year, my check airman had flown A320s for decades at more than one carrier, and he brought a wealth of knowledge to the table. “Great. The question is officially answered. Now let’s talk about that for just a moment,” he’d say, and we’d launch off on a tangent that often illustrated a point much more clearly than our manuals or training software managed to achieve.

The LOE is a point-to-point flight, conducted as a normal flight, with some abnormality thrown in. The LOE, while a jeopardy event, is scored with the flight broken into a number of segments. Pilots are allowed to repeat one segment twice or two segments once, if there’s an issue too significant to be covered as a debriefing item. The LOE is generally flown as a pair of flights so that the captain and the first officer can be evaluated in their roles as pilot flying and pilot monitoring.

I’ve seen LOE scenarios include holding on a clear day when someone fouled the runway, where they’re looking to see your fuel management and decision-making as you consider whether to hold or divert. A simple abnormality popping up on an arrival shows how you handle the division of duties in a high-workload phase of flight. Over the year, I’ve seen a flaps failure in the full landing configuration, followed by an ILS that went belly-up as we passed the marker. The company wanted to see whether we chose to break an aircraft limitation of 10 knots maximum tailwind on landing by flying an approach to the other runway, or whether we’d fly our stricken aircraft to the next-nearest airport.

Other LOE scenarios encountered over the years included winter operations to snow and ice-contaminated runways in south Alabama and an oil pressure indication failure in the midst of a busy arrival into New York. Any time an LOE started at a busy airport with multiple runways, you could pretty well plan on a runway change at first contact with ground control. The potential scenarios are endless, but they’re selected for good reasons. They’re all generated from real-world data and help to keep our pilot group proficient. And much like the real world, as long as you don’t bend metal or blatantly disregard company policy or the FARs, the difference in a right or wrong decision is usually found within the pilot’s rationale for making the decision.

As we joke within the industry, the difference between an airline pilot and a jet engine is that the engine stops whining once parked at the gate. In spite of our ability to elevate first-world complaints to an art form, one hardly hears a pilot speak ill of the AQP training system.

On any given month, I usually have a flight more challenging than the LOE. But don’t mistake our approval of the process—and its very high pass rate—as evidence that it’s a less-effective recurrent training method. If anything, I’d argue that the differing scenarios have served to introduce knowledge and proficiency in areas that would go completely untouched under the old method. 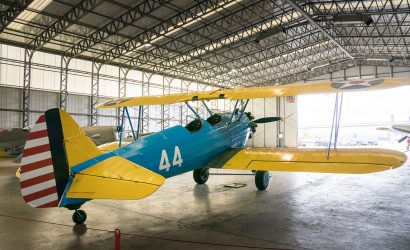