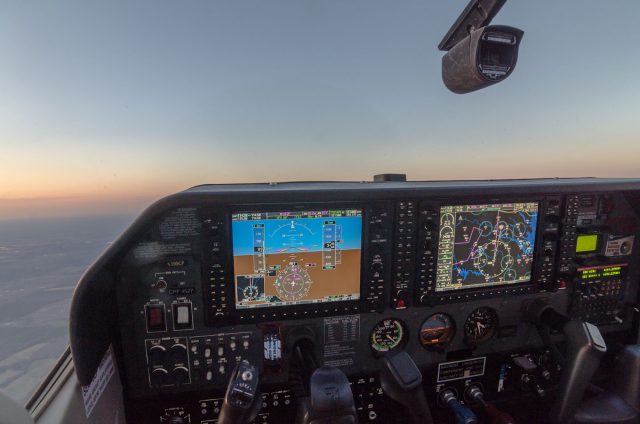 When a prospective pilot walks into our flight school at Sporty’s, one of the most common questions we hear is, “Should I learn to fly with steam gauges or a glass cockpit?” Like most questions in life, there’s no one-size-fits-all answer, but the prevailing wisdom suggests it’s better to start on steam and transition to glass than vice versa.

Is that really true, or is that merely flight instructor inertia? After all, most CFIs learned that way, so it might just “feel right” to them.

Two facts would argue against the conventional wisdom. First, almost every new airplane delivered today, from two-seat taildraggers to 300-seat airliners, has a glass cockpit. The battle in the marketplace seems to have been decided in favor of glass, and it wasn’t even close.

Secondly, glass cockpits are more reliable. There’s an interesting debate about whether they are safer or easier, but they are certainly less prone to failure. A Garmin G1000 has no mechanical gyro to fail, no hose to pop off the back of an instrument, and no directional gyro to precess. This is a big reason why airlines have adopted integrated cockpits so quickly.

For those two reasons, a brand-new pilot who’s pursuing an airline career at a large flight academy should consider starting with a glass cockpit. Since the goal is to get into a regional jet as fast as possible and fly a Boeing or Airbus for the next 30 years, it’s highly unlikely that the pilot will ever see round dials. Save time, learn good glass cockpit habits from the start, and never look back.

For everyone else—which is the majority of pilots we talk to—I firmly believe that steam gauges are the right answer for initial flight training. This isn’t misplaced nostalgia; if you’re going to fly Cessnas and Pipers for any length of time, it’s absolutely the more practical decision.

Most importantly, the oft-cited law of primacy suggests that what we learn first will stick, and that’s critical with instrument interpretation and aircraft control. If your first exposure to the airspeed indicator is a self-contained instrument with a needle that moves in a clock-like manner, you’re much more likely to understand exactly what that dial means. One instrument, one job. From there, you can move around to the rest of the six-pack and learn how the attitude indicator works, how the altimeter works, etc. By breaking the panel apart, it’s easier to learn how the different systems are related, and how they aren’t.

This building-block approach usually leads to a more complete understanding of not simply aircraft instruments but also how control inputs cause changes in instrument readings. Instead of getting caught up in software features, you can focus on the broad principles. Pitch for airspeed, you say? It sounds counterintuitive to most new pilots, but by covering up the other instruments and watching only the airspeed indicator, it’s fairly simple to see how the airspeed increases as you pitch down. I can still hear my primary instructor saying, “The yoke is connected to the airspeed indicator; pull back and you’ll pull the airspeed indicator up.”

There’s also value in learning how to create your own mental model of the airplane’s position and energy state: A glass cockpit tells you the answer, but steam gauges force you to think first. You’re really learning the skill of situational awareness before you even know what that means. One example is trend lines, those little pink marks found on the airspeed and altitude tapes of most glass cockpits. They’re incredibly helpful for detecting what the airspeed will be in six seconds, but with a traditional panel, the pilot has to calculate them. With a quick glance at the airspeed indicator, you can get a good idea of how quickly the airspeed is decaying by simply noting the speed at which the needle moves. This is a great skill to learn on your own before the panel starts offering a shortcut.

Of course, learning on round dials doesn’t mean you can’t ever switch to a glass cockpit. Far from it—because a steam gauge cockpit offers less information, the transition to those colorful screens is almost always easier than the other way around. Sure, there are some new buttons to learn and a few nuances of tapes to figure out, but the essentials are unchanged from an older cockpit. You’re simply adding some information, which is usually helpful or at the very least can be ignored. There’s also usually less to do, whether it’s watching a vacuum gauge or resetting the directional gyro. Glass cockpits can be easier if you approach them the right way.

But the debate about which transition is easier misses a crucial point: Round-dial airplanes are still far more common than glass-cockpit airplanes. Roughly 5,500 new piston airplanes have been delivered over the last five years; in 1978 alone, over 17,000 were delivered. Even if you assume every one of those new airplanes since 2014 came with a glass cockpit, it will take decades for the general aviation fleet to reach majority-glass status. One way to think about this dynamic is to compare airplanes with cars. It’s fun to learn to drive stick, perhaps for bragging rights or for that muscle car you dream of, but it’s pretty unlikely your next rental car will have a manual transmission. With airplanes, on the other hand, your next rental airplane or flying club airplane is highly likely to have at least some round dials in it.

Don’t Make It Harder Than It Needs To Be

Having made my case for learning “the old school way,” I’ll now suggest that most pilots should actually worry a lot less about this question than they currently do. After all, does it matter whether you learn to fly in a high-wing or a low-wing airplane? I don’t think so. There might be a few differences, especially in terms of ground effect or fuel systems, but the essential lessons are the same whether you trained in a 172 or a Warrior, and most pilots quickly transition to whatever airplane comes next. The same is true for avionics.

One reason this debate isn’t as important as it once was is that avionics have evolved. When the G1000 was first released in 2004, the choice was often between a fully integrated glass cockpit with terrain alerts and an autopilot, and a six-pack panel with Cessna 300 radios. Nowadays, it’s very common to see a hybrid cockpit, with a few round dials but a digital screen in place of the attitude indicator and/or DG. Is a 1975 Cessna with two Garmin G5s a glass cockpit? What if you add a color touchscreen GPS with terrain alerts, ADS-B In and digital charts? It’s not so black-and-white.

For this reason, I think it’s better to talk in terms of “integrated cockpits” rather than “glass cockpits.” The real transition challenges seem to come from those vertical tapes and a single primary flight display with dozens of features built-in, not the AHRS or the color screen found on smaller units and integrated systems alike.

Even among full glass-cockpit airplanes, not all systems are the same. Some of today’s second- and third-generation panels are noticeably easier to use than the original models, with touchscreens and dedicated control keypads instead of dozens of ambiguous soft keys and deep menus. An original G1000 compared to a new G3000 can feel like Windows 95 compared to iOS 13, even though they both fall under the same heading.

All these minor distinctions argue for a step-by-step approach to aircraft transitions, whether it’s the engine, the landing gear or the avionics that change. Start simple, then move up to more sophisticated equipment as your experience, mission and budget dictate. As you move up, make sure to add new capabilities slowly.

For example, the first time you fly a fully integrated glass cockpit, you would be wise do it with the synthetic vision turned off and without the benefit of a flight director. If the PFD allows you to split the screen, resist the urge and start out with a single, full-screen view to keep things simple. Focus on learning the presentation of the instruments and get a feel for what “normal” looks like in various phases of flight. The law of primacy is in effect here again, so make sure your first few flights on the new avionics focus on the essential lessons and the most important features.

As you get comfortable with the new avionics, slowly turn on features. Each time you do this, be deliberate about it and spend some time learning what the screen is saying. Do you know exactly what the trend lines are saying? Do you know the failure modes of that new software feature? Do you know how to get back to the essential attitude indicator screen if you get lost in menus? Until you can answer all of these questions, you shouldn’t move on to more advanced features.

I’m not suggesting you ignore the flight director or autopilot (if equipped). Quite the opposite: A good autopilot and a pilot-in-command who knows how to use it make for a powerful combination. Just make sure you’re still in command when you push the AP button.

The essential skills for flying remain almost entirely unchanged since the time of Charles Lindbergh—maintain positive control of the airplane, know where you are, and be prepared for what might come next. None of those priorities should be different just because you’re flying with an integrated glass cockpit. 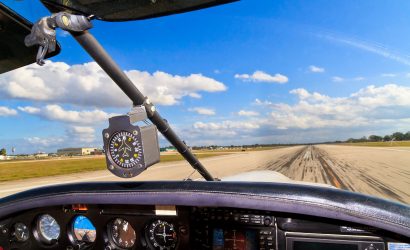