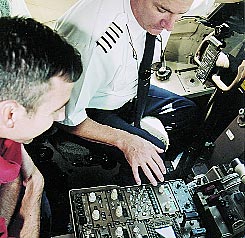 After September 11, pilot careers in 2001 looked bleak. Newspaper articles confirmed the airlines were hemorrhaging red ink, thousands of pilots had been furloughed and new hires appeared to be a thing of the past. While the media continues to talk about the tough times in the commercial air-travel industry, many insiders think the tide has turned.

According to Kit Darby, president of airline career specialists AIR, Inc., “The media keep saying there are no jobs in the industry, and meanwhile, there were 5,000 new pilot jobs last year. This is the time to train, stay current and build quality time, so as hiring heats up, you’re qualified to apply for the airline job you’ve always dreamed of.”

Hiring among the national airlines is already starting to boom. According to AIR Inc., American Eagle is expecting to hire 400; JetBlue, 200; and SkyWest, 150 pilots in 2004; and many other companies are planning to hire around 100 pilots this year. Mesa Airlines is thriving with 600 pilot hires expected this year.

“This is because of our agreements with United Air Lines, America West and US Airways,” says Richard Castle, chief flight instructor for Mesa Airlines Pilot Development. “And the end of our growth spurt isn’t in sight. We went from about 1,200 pilots to about 1,700 pilots in the last year, and that continues with about 50 to 100 new hires each month.” Only a handful of the nationals still have pilots on furlough.

The normal hiring requirements for Mesa and many other comparable airlines are back to pre-September 11 levels: 1,000 total hours with a minimum of 100 multi-engine hours. But these prerequisites are waived for Mesa pilot development program graduates who are hired with as few as 250 hours. Whether the students go through the ab initio or the PACE program, they’re guaranteed interviews with the airline, with a 90% chance of being hired.

Pan Am International Flight Academy also is starting to see the turn in hiring trends. “It’s been a challenging couple of years,” says pilot placement manager Stephanie Heron-Weeber. “Prior to the summer of 2001, we couldn’t hold on to our flight instructors—they were getting hired by regional carriers with about 600 hours. It wasn’t an easy time for us as a flight school, but over the last couple of years, we’ve faced a different challenge. Graduates have been getting hired, but they’ve been competing with candidates who have been in the industry for many years, including furloughed pilots with thousands of hours. In the last couple of months, however, we appear to have turned a corner and the outlook is so much brighter. In fact, just last week, four more Academy instructors were hired into airline jobs and many more are interviewing.”
Advertisement

The major airlines have been a little slower to recover, but the trend is changing for them as well. “We’re accepting people right now for [airline-pilot training] classes,” says Tracy Takara, manager of recruitment, selection and staffing for America West Airlines. “The range of our successful applicants go from pilots with 2,500 hours with the ink literally still wet on their temporary ATP certificates, to pilots with 15,000 hours who have been at the nationals for years, to pilots who have been furloughed. And the age range goes from the mid-20s to the mid-50s.” These numbers are very encouraging for people who think they’re too old to change careers.

Currently, America West and Southwest are the only two major passenger airlines that are hiring pilots. Alaska is accepting résumés, but Delta, American, Continental, Northwest and United still have thousands of pilots on furlough. A number of companies have been forced to cut pilot pay, some by as many as 30%. But it isn’t as bad as it sounds.

“Existing airline pilots are crying poor, but it’s only because they went from making $200,000 a year to $150,000 a year, and there are so many other benefits to the job. There’s no other place that offers such benefits as plenty of time off, flexibility, income and retirement,” explains Darby.

Major cargo carriers also are declaring an end to the embargo. ASTAR Air Cargo is already hiring, and FedEx, ABX, UPS and Air (formerly Airborne Express) have all reported positive hiring possibilities for 2004, and some of them are already accepting résumés.

All the bad press that has been given to the airline industry has affected recruitment at university-level aeronautical programs as well. Hopefully, that’s beginning to turn around.

“Recruiting is up a bit. I think we’ve bottomed out as far as that goes, but retention is another issue,” says Ted Beneigh, professor of aeronautical science at Embry-Riddle Aeronautical University. “One of our biggest concerns is students who move to non-aeronautical science majors to gain the option of doing their flight training off campus. The students will still be able to show an Embry-Riddle degree to future bosses, even though their flight training would not have been as rigorous as ours. The university, the students and their parents know th at the quality of outside training isn’t as good, but with the negative press, the students and their parents simply aren’t willing to spend the extra dollars for the flight training at Embry-Riddle.”

Despite the difficulties over the last several years and the varieties of their experiences, our group of experts was in agreement that now is a perfect time to be preparing for a cockpit career. AIR, Inc. reported that 585 pilots were hired in January and 782 pilots were hired in February this year. The company is forecasting 6,000 to 7,000 new hires for 2004. As the major airlines beging to hire, many more jobs will develop and one thing is certain: Only those people who are ready when the call comes will get the jobs.

Stay tuned for part two of this three-part series in the next issue, where we’ll be discussing the changes occurring in the industry today.