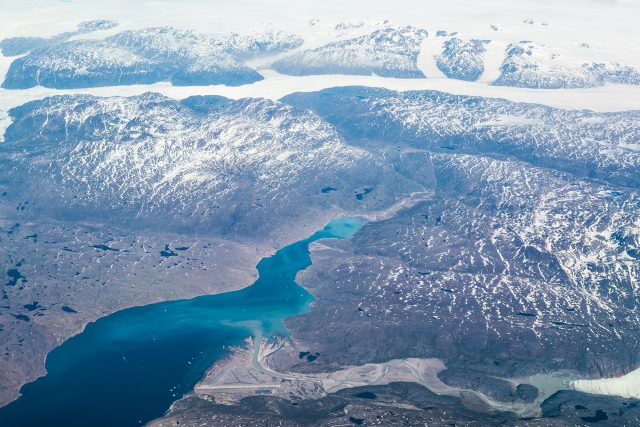 CAVU conditions are rare in Greenland. Today, that’s exactly what I have in northeast Canada and the giant ice cap continent. Three hours ago, when I departed Goose Bay, Labrador, with the forecaster’s promise of clear skies and tailwinds spelled out in the weather package, I was more than a little dubious that Mother Time and Father Nature would relinquish their grip on Southern Greenland just for me.

Fortunately, the tailwinds were there, and the usual weather wasn’t. Now, the GPS suggests I’m 90 miles out from my destination of Narsarsuaq, and, sure enough, I’m well ahead of my how-goes-it, flight-planned time en route. From 17,000 feet, I can see all the way down to the southern tip of Greenland and well north toward the capital city of Nuuk. If the Earth were flat, I could probably see the Eiffel Tower in the distance.

Slowly, the ice-capped mountains of Southern Greenland begin to materialize in the distance. Icebergs dot the water below, becoming more numerous and distinct as I slowly gain on the mountains of compacted snow. My God, this place is magnificent, and I’m far south of the highest part of the ice cap.

Many years ago, on my first trip to Europe, I was looking down from 35,000 feet, and the view of Greenland was nothing but white on white. I was eastbound in a 747 on my way from Los Angeles to Paris to cover the Paris Air Show. The pilot had just announced that we were crossing the Labrador Sea and should be over the western coast of Greenland in a few minutes.

Trouble was, the clouds below were confused layers of cirrus that merged perfectly with the ice cap. Even in early summer, the weather that far above the Arctic Circle was marginal, obscuring practically everything below 20,000 feet.

At that time, I couldn’t possibly have guessed that I would be visiting Greenland perhaps 50 times in the next 30 years. Contrary to popular belief, Greenland isn’t outside the range of many general aviation aircraft, and its weather isn’t as bad as it is in Northeastern Canada. There are a number of blue-sky-and-sunshine days in both summer and winter.

If you’re considering an Atlantic crossing to Europe by the milk-run route through Labrador, Greenland, Iceland and Scotland, you may need only about 700 nm range plus reserve. It’s true the survival equipment requirements for such a trip are strict and significant, but you can rent cold-water survival- suit rafts and most of the other items in Bangor, Maine, the last stop inside the U.S.

From the tourist’s perspective, Greenland features some things you won’t see anywhere else, unless you can afford a trip to Antarctica. If you stick to the bottom half of the “green” continent, you’ll miss any possible encounters with the polar bears of the northern cap, but you’ll need to surmount a massive accumulation of ice, over 10,000 feet tall, that grows out of the North Atlantic.

Narsarsuaq, Greenland, resides near the bottom of the island continent—okay, it’s not officially a continent, but why it’s not is more historical than geographical—and it’s one of the most popular stops on the high road to Europe. The airport was built by the U.S. Army in the early years of WWII as a refueling stop for aircraft headed for the European Theatre and was designated as Bluie West One. That’s the reason its official airport code remains BGBW (B for North Atlantic, G for Greenland and BW for its original name).

From a pilot’s point of view, there are four primary airports in Greenland, Narsarsuaq, on the southwest coast, near the southern tip. The three others are: Gothab, the capital of this territory of Denmark, recently renamed Nuuk, 200 miles north, also on the west coast; Sondrestrom Fjord (also known as Kangerlussuaq), 200 miles north of that; and Kulusuk, on the east coast, straight across from Sondrestrom Fjord.

Today’s airport, BGBW, was constructed at the end of a 42-mile-long fjord near the southwest coast of Greenland. The runway, 7-25, begins practically at water’s edge and slopes steeply uphill toward the ice cap. Mountains surround the airport on three sides, close enough that the IFR minimum MDA is 1,800 feet and 6,000 meters visibility. Eighteen hundred and 3.5 miles is hardly a typical IFR approach minimum. Keep in mind, that’s the lowest minimum, applicable to a 100-knot aircraft. At 135 knots, the MDA rises to 2,400 feet. Narsarsuaq is no place for amateurs.

Standard procedure at BGBW is to approach and land uphill toward the east and depart to the west to avoid the ice cap.

For that very reason, a common practice during marginal weather used to be to descend VFR (sort of) below the clouds while still well out over the Labrador Sea, track inbound to the Tunulliarfik Fjord, designated by an NDB and follow the fjord on the south side of the beacon as it winds inland to the airport. There used to be a half-submerged ship several miles into the fjord to reassure pilots that they were in the correct fjord.

Trouble was, there was another fjord on the north side of the NDB that would lead you just as far inland but would terminate in a solid mountain wall. If the weather were low, you’d need to retrace your steps back to the beacon and fly up the proper fjord to find the airport, adding 84 miles to your trip.

The pilot of a Bellanca Viking 300 made exactly this mistake many years ago. He flew up the wrong fjord, turned around and tracked back to the beacon, found the correct fjord and started back toward Narsarsuaq. The Viking ran out of fuel only about 2 miles from the airport. The pilot ditched his Bellanca near a boat in the fjord, walked out on the right wing and stepped into the boat practically without getting wet. Relieved of carrying fuel, the two wing tanks were now full of air and served as giant pontoons that kept the airplane afloat. Since the wings were constructed of Sitka spruce, the airplane floated just fine in the smooth, semi-fresh water of the fjord.

When it became obvious the airplane wasn’t going to sink, the boat owner threw a line around the prop and towed the Viking to shore directly abeam the threshold of the airport’s runway 7. The pilot climbed back into the cockpit, extended the gear, and a four-wheel-drive truck hauled the Viking out of the water onto the beach.

The story goes that there was very little damage to the Bellanca, and the avionics never got wet. Water damage was minimal, as the inner fjord was fed by water runoff from the ice cap rather than the salty North Atlantic.

However you arrive in Narsarsuaq, the people are great, the service is excellent, and there’s even a comfortable Scandinavian-style hotel on the airport if you decide to stay over. Once, a few years back, I stayed there for five days waiting for weather to clear so I could make the next leg to Reykjavik. I was flying a new Maule M6-260 on amphibious floats that accumulate ice like you wouldn’t believe, and IFR was out of the question.

Oh, yes, one other thing about Narsarsuaq and most other Greenland airports: Fuel costs $17/gallon.

Another feature of the Greenland ice cap is the Distant Early Warning radar network, better known in the ’60s and ’70s as the DEW line. It was established during the Cold War. There were three radar stations built out on the cap, code-named Sea Bass, Sob Story and Big Gun. These dome-shaped, top-secret radar facilities were built near or above the 10,000-foot level of the cap and looked predominately north toward Russia across the North Pole. They were resupplied by ski-equipped Lockheed C-130s and helicopters staged primarily out of another U.S. base at Sondrestrom Fjord, 400 miles north of Narsarsuaq, also on Greenland’s west coast. All three radars have long been decommissioned.

It’s hard to imagine what manner of behavior could earn a G.I. an extended stay at any of those facilities, but being stationed on top of the Greenland ice cap must have been regarded as the most boring, if not necessarily the toughest, duty in the military.

Another interesting sidebar to the Greenland story is the saga of a P-38 Lightning being ferried across the Atlantic to Europe in the early days of WWII. The airplane was part of a flight consisting of six P-38s and two Boeing B-17s. The group departed Sondrestrom, destination Reykjavik, and encountered severe fog and poor weather conditions over the Davis Strait. All eight aircraft turned back toward Greenland, only to discover the weather had closed done behind them. With little other choice, all eight airplanes were forced to land on the ice cap.

No one was hurt in the forced landings on the flat surface of the ice, and all pilots and crew were rescued a few days later. When the war ended, there was no incentive to salvage the airplanes, so they were abandoned out on the cap. All eight warbirds were gradually entombed by the years of storms and shifting ice.

Inevitably, someone decided to bring up one of the P-38s, and the recovery finally succeeded, as I wrote for this magazine in 2007: “Warbird expert Bob Cardin led a team of adventurers onto the ice to recover one of the airplanes. The 10th expedition to make the effort, Cardin’s group battled blizzard conditions and minus-20 degrees F temperatures and finally succeeded in retrieving a partially crushed P-38 from 266 feet below the surface of the ice. The team transported the disassembled airplane by ski-equipped DC-3 to the Greenland port of Kulusuk and shipped (the P-38) to Savannah, GA.”

The full story of the recovery, transport and eventual restoration of that P-38 could fill the rest of this magazine, but San Antonio oilman Rod Lewis eventually purchased the airplane, named Glacier Girl, and decided to complete the trip to Duxford, England, for the Flying Legends Airshow. Duxford was the original destination planned in 1942.

I joined Rod Lewis’ trans-Atlantic team as a result of my association with Steve Hinton, a well-known test pilot, unlimited race pilot and owner of the Planes of Fame Air Museum in Chino, California. At the time, Hinton was the only pilot insured to fly Glacier Girl, and he felt the team needed someone along who knew a little about flying the ocean. Since I knew as little as anyone, I was hired as a consultant.

Unfortunately, we didn’t make it to Duxford on that trip. Bad weather in England intervened, and I wound up flying home from Reykjavik. Today, it goes much better, and we arrive safely in the surprisingly friendly conditions.

Nevertheless, for all you wannabe warbird owners out there who have a few million dollars to spend, be advised that there are still two B-17s and five P-38s just waiting to be retrieved from 250-300 feet of glaciated snow and ice on top of the Greenland ice cap.