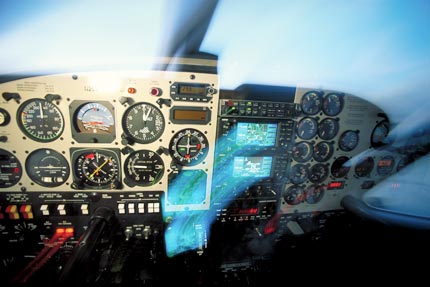 The Honeywell Bendix/King KLN94 and Garmin’s CNX80 and GNS 430 or 530 are representative of IFR-approved GPS units, and their commonality extends to IFR operations, in which flight plans are modified in very interesting ways as IFR procedures are added. So, we’ll explore the addition of IFR procedures, which can complicate a simple VFR flight plan.

A VFR flight plan is just a list of waypoints strung together from your starting point to your destination. The (Great-Circle) line between waypoints is one kind of flight leg (defined by those waypoints) and is only one of more than 20 database leg types (holds, procedure turns, fix to altitude, course to an intercept, arc to fix, etc.) defined in the ARINC 424 standards. The full set of leg types isn’t required to implement all existing procedures. The 430 or 530, or KLN94 units can do all of the procedures, but they sometimes require manual pilot intervention, such as changing to OBS mode. If a unit has the full set of ARINC 424 data, there’s less pilot intervention required.

The CNX80 has this full set of leg data (the other units don’t) and provides roll-steering commands for some of them to your autopilot (which may or may not be able to use them). It also has advanced features that are common to flight management systems, including the ability to add airway segments to flight plans.

Adding An Arrival
Procedures are added to VFR plans by using the PROC key on all three units. The least complex procedure to add is an arrival, since it consists of a set of waypoints that begins with the chosen transition and ends at a waypoint near your destination (in the 430 or 530, it adds the destination as well). All legs in the procedure are, therefore, the same simple type as in your VFR flight plan. These legs are added after your destination airport in the 430 or 530, but before it in the KLN94 and CNX80. Merging the en route plan you created and the canned set of waypoints added by selecting the arrival may require editing for seamless flow between your en route and arrival phases.

When merged, you may have created either duplicated waypoints or backtracking in your flight plan. For example, on the 430 or 530, the en route flight plan you created will take you to your destination, then back out to the transition to the arrival and finally back to your destination. So, you need to eliminate some waypoints or “jump ahead” in the plan as described last month using the Fly Leg or Direct-To operation. For the KLN94 and CNX80, your destination appears only once in the merged plan, but for any unit, if you didn’t design the en route plan to end at the arrival transition just before your destination, you may have some editing to do.

Adding A Departure
Departure procedures are added into your flight plan after your departure airport and before the next en route waypoint, so the en route plan should be constructed accordingly. The flight plan from KBUR to KBFL, was modified by adding the VNY7 departure with the FIM transition.

This is a simple departure consisting of the VNY, SUANA and FIM waypoints along with a Direct-To operation from KBUR to VNY. Other departures can have a much more complex starting procedure and complex legs to the transition.

There, you climb to 413 feet on a 012-degree heading (leg 1), then a course of 350 degrees to SEPDY (leg 2) and then a heading of 200 degrees to inctercept the 135-degree course to PORTE (leg 3), etc. The CNX80 has roll-steering commands for all course-based (but not heading-based) legs, so the 200-degree intercept heading is a pilot nav leg (no autopilot commands).

Adding An Approach
Approaches contain waypoints and leg types, and are added to the very end of your flight plan for the 430 or 530, and just before your destination airport in the KLN94 and CNX80. But when are these waypoints added to your flight-plan list, and when are they “activated”?

The 430 or 530 gives you the option to load or activate the approach when you select it, but the KLN94 doesn’t. Loading the approach adds the legs to your plan, but the flight plan on your map doesn’t show those legs. When you activate the approach, you create a Direct-To operation from the present position to the IAF. The CNX80 keeps a separate modified plan when the active plan is edited and replaces it only when you execute it. But that operation doesn’t create a Direct-To operation, like the 430 or 530. It simply replaces your flight plan with one that contains the approach. It’s your job to ensure that the new plan flows along the path you intend. The KLN94 adds the approach waypoints when selected, just as the CNX80 does when executed, and makes the nearest leg active. Again, you may need to edit for a proper sequence of legs.

All units “arm,” according to the KLN94 terminology, at 30 nm from the airport, which means that you’ve entered the terminal phase of your flight, the CDI scale changes to one mile, and the RAIM integrity limits change from 2 nm (en route phase) to 1 nm (terminal phase). Arming has nothing to do with activating the approach, which is the process of inserting the approach waypoints into the active flight plan. The KLN94 announces it’s armed and asks you to set the barometer at 30 nm. At 2 nm from the FAF, all units begin a CDI scale change to 0.3 nm, which is reached at the FAF. The KLN94 does a RAIM check at 2 nm, then announces that the approach is active if you meet the RAIM limits for the approach. Both the 430 or 530, and the KLN94 alert you to RAIM failures in all phases of flight (ENR, TERM or APR), a requirement for all TSO-C129 and TSO-129a units. The CNX80 doesn’t require a RAIM check because the unit is WAAS-certified under TSO-C146a.

When vertical guidance is incorporated in WAAS units, in the Gamma 2 and 3 phases, error signals will be sent to the glideslope portion of your CDI or HSI. For LPV approaches (Gamma 3), the APR integrity limits will decrease to 40 meters (vertical) and 50 meters (horizontal) at the missed approach (MA) point.

If you add a hold point in your flight plan or need a course reversal (hold or procedure turn) for an approach, sequencing must be interrupted in the KLN94 before entry. The 430 or 530, and CNX80 put hold or procedure-turn legs in the approach waypoint list and then automatically suspend and unsuspend leg sequencing outbound and inbound. Roll-steering commands are available in the CNX80 if you want to use the autopilot to fly these holds. If sequencing is automatically restored inbound and you want another turn in the hold, you have to push OBS or SUSP before reaching the hold waypoint. If you fail to do that, activate the previous leg to “back up” a step in your flight plan.

In all cases, adding the approach eliminates the destination airport in favor of the MA point and subsequent procedure for that airport. Per FAA dictate, these units must suspend leg sequencing after the FAF (before or at the MA). At the MA, you’re expected to initiate the procedure manually before removing that suspension to re-establish autopilot operation. To restore sequencing, push SUSP or OBS in the CNX80 or 430 or 530, and Direct in the KLN94. You may (depending on the unit) need to use the OBS mode if the procedure is to intercept a specific course to a waypoint.

Finally, you can choose Vectors in lieu of an IAF, or activate Vectors-To-Final if an IAF was chosen earlier. A back-extended magenta line along the final approach course to the FAF is then shown for guidance, and you can push HDG and NAV together on your autopilot to follow the vector with the HDG bug until the NAV mode takes over as you approach the course line.

So, these examples are some of the essential IFR operations with approved GPS units, and they illustrate that they have a lot in common. Knowing what they can do helps you to understand and to work them better. And taking a few classes can’t hurt, which will enable you to completely master this technology.