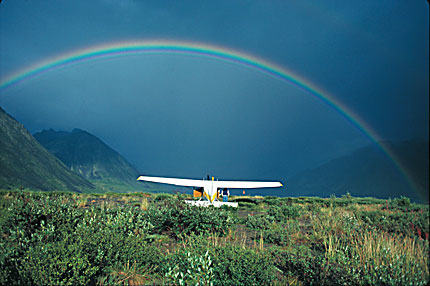 On a warm, summer afternoon, a commercial-rated pilot and his three passengers climbed into a Cherokee for a pleasure flight over the picturesque landscape of northern Arizona. After he topped the tanks, the out-of-state pilot’s preflight was limited to the traditional walk-around inspection.

At 3 p.m., he was cleared for takeoff on runway 3 at Flagstaff, Ariz. When half of the 7,000-foot strip was behind him, the pilot was probably wondering why his takeoff roll was taking so long. As the end of the runway loomed in front of him, he pulled back on the control wheel and forced his bird from its perch. The Cherokee climbed to 500 feet, but could be coaxed no higher. It began descending at full throttle and crashed one mile from the point of its liftoff. There were no survivors.

NTSB files are crammed with cases full of flat-land pilots venturing into mountainous areas without any kind of knowledge of the dangers that can turn a pleasure flight into a bad experience. Flying safely over the peaks and ridges can be accomplished with two types of prerequisites—preparation and attitude.

Generally, your aircraft owner’s handbook shows performance figures based on standard conditions at sea level. It doesn’t take an aeronautical engineering degree to know that these figures will be vastly different at, say, Winslow, Ariz., where the airport elevation is 4,938 feet above sea level. Air density is going to be affected when the mercury starts climbing. How will your plane react? Horsepower output will be decreased and the loss of power will reduce the efficiency of your propeller. So there you are, rolling along the runway at full throttle, but the prop can’t provide sufficient thrust as it bites into the reduced air density. Before you reach the proper speed for lift, you may reach the end of the runway. If you do get airborne, you’ll have a handful of new problems.

What is density altitude (DA)? Most pilots who are involved in hanger flying don’t discuss it because they don’t understand it. You mustn’t confuse DA with pressure altitude, true altitude or absolute altitude. It has nothing to do with height. It’s used to determine the performance capability of all aircraft. Air density decreases with altitude, and the effects of high temperature and humidity combine to reduce aircraft performance. To a pilot, it means a higher true airspeed in order to sustain the plane throughout its operating parameters, a decrease in horsepower output, propeller efficiency and rate of climb, as well as an increase in runway lengths for takeoffs and landings.

Solving DA problems is standard operating procedure for mountain fliers because many airports in the Western states are situated at high elevations. High temperature can affect DA to such an extent that safe flying conditions become impossible.

Remember the pilot at the beginning of this article who pulled his Cherokee off the runway and crashed moments later? This type of accident happens when a pilot tries to fly out of ground effect without sufficient airspeed or power. Even most macho aviators would experience a sickening feeling in their knotted stomachs if their planes suddenly began settling back to Earth. So, additional power is needed to counteract the increase in drag as an airplane leaves ground effect. That’s easy to say, but how do you really solve the problem during takeoff when the engine already is developing maximum power? The answer is to use ground effect to your advantage.

Surprisingly, a plane’s performance at slow airspeeds actually improves during ground effect, so don’t be impatient to escape it. Lower the nose after takeoff and fly for a few feet over the runway. Upon reaching a safe climb speed, gently raise the nose and zoom safely over the trees.

At high-altitude airports, you’ll need more airspeed during takeoff than you would at sea level because the air is thinner. One important rule, however, is to always use the identical indicated airspeed to rotate, despite of the density or physical altitude. Much more of the thinner air must rush through the pitot tube in order to record the indicated airspeed. Consequently, the airplane will be moving much faster for this indication. By using the same indicated airspeed, you can quite automatically compensate for the DA by actually going faster. Generally, airspeed will be about 2% faster than indicated per thousand feet. But a catch-22 situation accompanies this fact due to gusty winds that are infamous at mountain fields. Prudent pilots increase rotation speed by 10% to 20% for a greater safety margin.

Improper leaning techniques that are used at high-elevation airfields can result in engine damage, especially when it comes to takeoffs and en route climbs. When you do consider proper mixture control, the DA becomes more important than the mean-sea-level (MSL) altitude. At DAs that are above 5,000 feet, flat-land fliers painfully discover that performance capabilities deteriorate rapidly at full-rich mixture. For normally aspirated engines, leaning the engine back from full rich will most likely add extra power.

Before the takeoff roll begins, you should already know whether or not you have enough runway in order to get airborne. If in doubt, a good rule is to pick a point about halfway down the runway. As you pass that point, you should abort the takeoff if you haven’t reached at least 70% of the speed required for liftoff. If 70% or more of the necessary speed is attained at the halfway point, you’ll have enough runway remaining to leave the ground. This won’t guarantee positive obstacle clearance, however. So now, you have another problem.

Always use the best angle-of-climb speed (Vx) to gain the maximum altitude in the minimum amount of time. Owner handbooks usually publish Vx for airplanes with the flaps down, but few reveal Vx for a climb with flaps up. Flaps help to increase the climb angle, but are recommended only to clear an obstacle at the end of the runway. With flaps down (according to your owner manual), the takeoff roll is reduced, and you can start climbing sooner. While it’s true that flaps will help you clear an obstacle after takeoff, the steepest climb angle occurs when the flaps are up.

During your takeoff roll, keep the elevator in the neutral position to decrease induced drag. Lower the flaps as you approach liftoff speed and accelerate to Vx. Raise the flaps after clearing the obstacle and accelerate to the best rate-of-climb speed (Vy). As altitude increases, Vx and Vy converge. Be sure that you know these speeds for the DA at which you’re flying.

Often, pilots who face high DAs want to go shopping in the turbo market. A turbocharged airplane will dazzle you with an increase in rate of climb, fuel mileage, cruising speed and service ceiling. Available horsepower at sea-level and high-altitude fields are nearly equal. This leads some pilots to believe their takeoff roll at high elevations will be about the same as from sea level. Wrong. You’ll have to accelerate to a faster groundspeed, although the indicated airspeed won’t change. So, even with a turbocharged engine, you’ll need longer runways at high-elevation airports. There’s no need to lean turbocharged engines for takeoff in high-density conditions. They’re capable of producing manifold pressure equal to or higher than sea-level pressure.

Performance is seriously reduced in Arizona, New Mexico, Utah, Nevada, Colorado and other Western states, where even in the fall, temperatures can remain high. For example, Grand Canyon Airport in Arizona has an elevation of 6,605 feet. Taking off when the temperature is 90 degrees F provides a DA of 10,204 feet. In New Mexico, the airfield at Santa Fe sits at 6,344 MSL, but at 90 degrees F, the DA will be 9,697 feet. What about Bryce Canyon in Utah, where the airport elevation is 7,586 feet? If you’re rolling along the concrete with an OAT of 90 degrees F, your plane will perform as though it’s at 11,199 feet!

Obviously, one of the first safety requirements during the preflight is to keep your airplane as light as possible. Most general-aviation accident reports graphically illustrate the need for pilots to appreciate the effects of weight-and-balance control. An overweight airplane is going to keep you busier than a one-arm paperhanger. This is especially true while taking off or landing,which is when optimum performance, stability and control are essential.

For any flight over mountainous terrain, you must be assured that your plane is properly loaded and balanced. Excessive weight will cause an increase in your takeoff speed and distance, an increase in your stall speed, landing speed and rollout, along with a reduced maneuverability, rate and angle of climb, as well as a lower service ceiling and cruising speed.

Another important item for you to consider is the route of flight. Many pilots, accustomed to airports near sea level, instinctively select a cruising altitude of 15,000 feet for a flight over rugged mountains. A careful study of the sectional charts for Western states reveals many routes over open valleys, along highways, railroads and large rivers. Although these routes may add a few minutes to your total flight time, they offer safer terrain clearance at lower MSL altitudes and provide some measure of safety if an emergency calls for a forced landing.

Your choice of aeronautical charts also is important. Never plan a cross-country trip over rugged mountain peaks by using only low-altitude en route charts. The reason is that they’re designed primarily for radio navigation. Sectional charts are intended for flying by pilotage and showing landmarks in great detail. Pilots who use outdated charts will usually be rewarded with a few surprises during the flight.

If your journey will take you over densely forested areas or rugged terrain to a specific mountain airfield, your preflight planning should include a chat with an accident-prevention counselor who is familiar with the area. These specialists provide invaluable assistance regarding the best routes to take, the excellent time of day for the flight and the sound choice on how to approach the airports wherein you intend to land. These counselors are available throughout all the Western states, and all it takes is a phone call to a local fixed-based operator or flight service station to get in touch with any one of them.

Any flight poses an element of risk, especially if the flight is going to take you over towering peaks or desolate terrain. The proper training, getting checked out in unfamiliar aircraft, preflight planning and an airworthy plane are vital for your safety.

Remember that the ultimate go/no-go decision is yours. Never allow your compulsion to overcome your good judgment. Just remember that it’s the pilot’s attitude alone that makes him a professional at 200 hours or an amateur at 2,000 hours.