Disruption is a hot topic these days, but the 16th century had plenty of it, too. In the span of a generation, the printing press (and the Protestant Reformation) fundamentally changed the way many Christians practiced their religion. Instead of listening to a priest interpret the Bible, the average churchgoer could read it in his native language and make up his own mind. This movement wasn’t universal, and it wasn’t without controversy, but for many, power had clearly shifted from the pulpit to the pews by 1585.

Aviation is experiencing a similar shift, although it probably won’t change the world in such a momentous way. Thanks to the ubiquity of internet access, the power of software, and the diversity of mobile devices, pilots no longer have to depend on a Flight Service briefer or TV meteorologist to explain the weather. We can now consult our iPads, which are overflowing with sophisticated weather products, from radar imagery and icing graphics to MOS forecasts and Skew-t diagrams. Weather forecasting has been democratized.

Most of us probably consider this change to be liberating, but it’s not without drawbacks. While apps like ForeFlight and Garmin Pilot can simplify the flight planning process, if we’re not careful they can also make it confusing. We are all our own Flight Service Stations now, forced to assemble weather information, evaluate it, and make a plan. Which sources can be trusted? What do they all mean? How much weather information is enough?

To answer questions like these, pilots need more than just a passing acquaintance with aviation weather. The differences between base and composite radar reflectivity, or the limitations of a cloud top forecast, are not just trivia. They determine whether our new tools are safety enhancements or distractions. Use them correctly, and it has never been easier to make a safe decision; use them poorly, and you can stumble into a deadly trap.

Unfortunately, a growing number of pilots don’t seem to be interested in such details. So at exactly the moment when we need to be weather geeks more than ever, pilots are tuning out. Why? 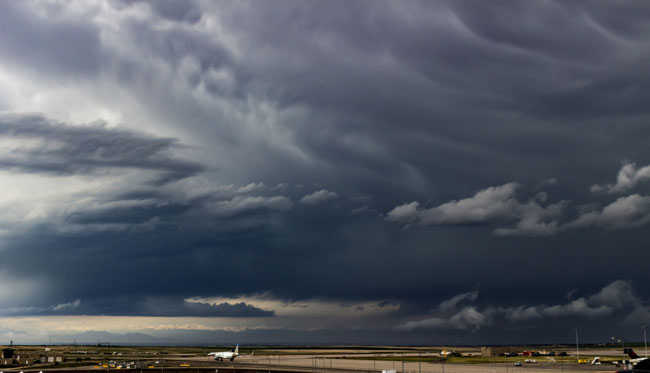 Our current system of aviation education, both the curriculum and the instructors, deserves some of the blame. As the old saying goes, “if you measure it, you aspire to it,” and right now ground reference maneuvers get measured a lot more than weather decision-making skills. A pilot is much more likely to bust a checkride because their S-turns weren’t within ACS standards than because they read the upper air analysis incorrectly. Given this bias toward easily scored maneuvers, it’s no surprise they get the most attention during primary training lessons.

Learning about weather flying is also a lot more time-consuming (and thus more expensive) than most other subjects. A motivated student pilot can do eight landings in a one-hour lesson, but it’s hard to cram a lot of practical weather experience in the same amount of time. That happens beyond the practice area and often over dozens of lessons, as weather charts are compared to actual conditions aloft. With flight lessons costing over $200/hour at some schools, instructors are understandably focused on efficiency, so these finer points are often skipped over entirely.

Some instructors do cover weather in more detail, but even this sometimes devolves into scaremongering instead of thoughtful instruction. There might be stern lectures about the delay in datalink radar (true but overrated) or the requirement to call Flight Service for an “official briefing” (completely false—there’s no such thing). This is often blamed on old timers being curmudgeonly, but more likely it’s due to the instructor’s lack of experience with new technology. The skills required to be a great primary flight instructor are not the same as those required to be a great weather flying pilot, and the rapid pace of technological change means some instructors are simply not comfortable with the latest tools.

In my experience, the best weather instruction seems to occur during instrument training. This makes sense on a very basic level—instrument flying is all about managing the risks of flying near weather, so it’s the perfect time to geek out—but reserving serious weather training for this step is a major mistake. Most obviously, such a strategy does nothing to help the 50% of pilots who don’t have an instrument rating or to address the persistence of VFR-into-IMC accidents.

Just as importantly, pilots who ignore weather during private pilot training often end up less confident about cross-country flying in general and less willing to use their new pilot privileges for transportation. That’s a shame, because those longer trips are some of the best experiences you can have in an airplane.

Technology And Its Promises

All this talk about instructors should not obscure the role technology plays in changing our expectations and habits. Consider Google and its slow evolution from database to interactive assistant. Five or ten years ago, typing “what’s the weather?” would have produced a list of websites. From there, a searcher could compare various forecasts and charts, then come up with an answer. It was a process, and it took time and deliberation.

Type that same query into Google today and you’ll instantly be presented with an answer: local temperature, cloud cover and forecast. No need to click through multiple websites and no need to even enter your location. The search engine knows where you are and has decided for you what the best forecast is.

It’s a subtle change, but it has significant implications. Applying this simplistic approach to complex personal decisions is asking for trouble, but some pilots are trying. The clearest example of this trend is the current crop of Flight Risk Assessment Tool (FRAT) apps. These present a series of questions, from pilot experience to destination weather conditions, then score the flight based on the potential risk, complete with a red light/green light answer. It’s a fine concept, but it’s awfully messy in practice. The go/no-go decision, much like bond ratings in 2008, is not easily summed up by an algorithm.

A recent VFR flight reminded me how fuzzy these decisions are in the real world. I was flying home from Oshkosh in a Robinson R44, and the weather was interesting enough to create some uncertainty for this 500-foot AGL flight. The departure airport had clear skies and good visibility—a FRAT would have been flashing green—but conditions 150 miles south were more complicated, with showers, thunderstorms and 1,000-foot ceilings across Illinois and Indiana. Canceling would have been easy, but with a little knowledge and some studying, things looked less threatening. The storms were scattered, not stacked up in a line, and they weren’t building as the day wore on.

My decision to take off was not the result of an app or a simple radar picture; I departed because I knew enough about the overall weather system to suspect it would weaken as time went on. I’m not sure an app could have reached this decision on its own. An awareness of the big picture, combined with a willingness to be flexible, changed the classic go/no-go decision to “go a little bit and reevaluate 100 miles south.”

New technology definitely made the flight easier. My iPhone kept me updated on the latest weather conditions before takeoff, even while strolling the grounds at Oshkosh. After takeoff, the datalink weather on my iPad was extremely helpful for keeping the big picture in mind. Its most important role was to prevent me from being backed into a corner as conditions changed. As good as ForeFlight was, though, the best weather tool was the front window, and almost all of the flying involved nothing more than dodging ugly clouds. In the end, there was hardly a bump or a drop of rain, although I certainly didn’t fly direct.

The problem is, it’s simply impossible to simulate this kind of decision-making during a ground lesson or on a knowledge test. Neither textbooks nor technology can make flying safe or easy. That only comes with practical training, experience and discipline.

The word progress suggests improvement, but that doesn’t mean it’s always easy or straightforward. Aviation apps and new forecast tools are indeed progress, but we shouldn’t cede our authority over weather decision making just because the graphics are great. Neither should we use technology as an excuse to stop learning or become passive consumers of weather data. After all, we are drowning in data, not answers. Those must come from the pilot in command.

John Zimmerman is vice president of Sporty’s Pilot Shop’s Catalog Division. He regularly flies a Citabria, a Pilatus PC-12 and a Robinson R44 helicopter. You can find John’s blog on Air Facts at airfactsjournal.com.