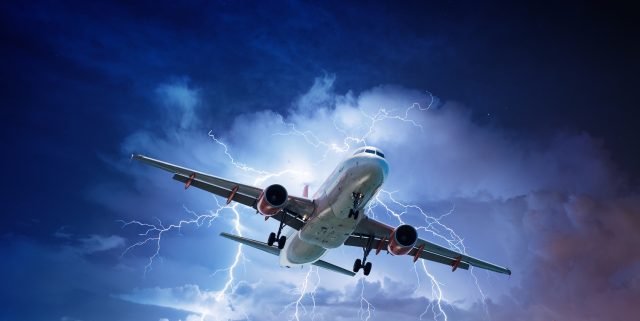 It was a dark and stormy night. Well, sorry, but it was. My crew and I were assigned to a late flight from Houston Intercontinental (IAH) to Memphis (MEM). It was the last leg of a long day, which included an inbound from Colorado Springs (COS) and a Wichita (ICT) turn. Houston was uncharacteristically cool and dry, a powerful line of thunderstorms earlier in the day having wrung out the atmosphere like a sponge.

That line of storms didn’t disappear after punishing Houston, Oklahoma City and Des Moines. It stretched from a low spiraling somewhere over Quebec all the way to the Gulf Coast. It now inched slowly across Chicago, St. Louis, Little Rock and Lake Charles, Louisiana.

As we did our preflight preparations, I stared at the radar and willed the storms to move faster. I consulted my dispatcher. “What do you think?” He was cheerful and optimistic. “Oh, no problem,” he said, “at the rate they are moving, they will clear Memphis before you even get there. I’ve got you an alternate, too, just in case.” I was less cheerful and optimistic. My little glowing screen seemed to imply a slowdown. I asked the obvious question. “What’s the alternate?” “Oh,” he said, “Nashville’s looking good for quite awhile.”

I agreed with the dispatcher’s “re-evaluation” and commenced the next negotiation. After some minutes of gentle persuasion, I convinced him to delay boarding for half an hour to ensure that the line would be past Memphis at our arrival time.

By the time we rotated on runway 16L, I had already concluded about five negotiations regarding this flight. The dispatcher and I had worked out the new alternate, a modified route (up to Tulsa and then into Memphis from the west), some extra fuel for contingencies, and an agreement to delay the boarding. I then negotiated a truce with the gate agent and Houston Operations, neither of whom were happy about the delayed boarding. Unfortunately, the negotiations were far from over.

Here behind the front, the rides were smooth. When we pointed the radar to the east, however, I realized we still had a problem. The squall line was not “well past” Memphis, as I had hoped, but, indeed, had not even reached Memphis. We were racing a line of nasty thunderstorms and this time hoping they would win. We asked Center if we could slow down to minimize the inevitable holding pattern at Memphis. They agreed. I patted myself on the back for adding the extra fuel.

Twenty minutes later we checked on with Memphis Approach and commenced our second round of negotiations. The storms were almost directly over the field, with gusty winds from the north, heavy rain and flashes of lightning illuminating the angry gray clouds from horizon to horizon. I asked Approach where they wanted us to hold.

To my surprise, the controller, cheerful and optimistic (are you beginning to spot a theme here?), said to continue the arrival and plan on ILS runway 27. This, of course, rang my alarm bells. For starters, the wind was, as previously mentioned, gusting out of the north. Also, as any new private pilot will tell you, the approach course for runway 27 lies east of the airport, the last sector of the Class B airspace that the eastbound thunderstorms would clear. We had calculated performance numbers for runway 35L, which seemed to me like the no-brainer choice. I queried the approach controller.

“Could we have 35L instead?” He replied quickly and confidently, “Oh no, you don’t want that. There is a massive cell right on the 35L approach course.” I commenced another negotiation. “Well,” I said, “how about if we hold here at HOBRK intersection while we wait for the cell to move east of the localizer?” He replied with the tranquility of someone sitting in a quiet, darkened, air-conditioned office. “Naw, I can sneak you around the north side of the field on a right downwind and get you in much faster. The 27 approach path looks much better now.” In hindsight, I feel that the terms “sneak” and “much better now” should have given me pause.

I frequently make bad decisions. There are many reasons for this. Most involve incomplete information, misinformation, human frailty and simple poor judgment. Many of my spectacularly bad decisions, though, are the product of well-meaning advice from overly confident authority figures.

That evening in Memphis, my poor advice came in the form of a northward vector from a helpful approach controller who was, after all, not sitting in the cockpit of a regional jet approaching a line of thunderstorms but sitting with his feet up on the console, a hot cup of coffee in his hand. I was the one who should have known better. Instead of insisting on a few minutes of holding, I let this controller lead me down the primrose path, which was actually a box canyon of cumulonimbi.

The first vector was okay. My brain, infected by his optimism, saw what the controller had prepared me to see: a break in the line north of the airfield with heavy storms southeast and fewer, more distant cells to the northeast. I could even see the lights of Memphis below, which gave me unwarranted confidence in his plan. We headed into the hole. At first, it was eerily smooth and calm.

The radar revealed some red and purple cells to the left. Cloud-to-ground lightning illuminated a roiling cauliflower-shaped supercell to the right. But there was clearly a path forward along the route suggested by the controller. A band of moderate rain stretched for a mile or so, and then light showers between the stronger cells.

The first sign of trouble took the form of a thump, a single, powerful jolt that shook the airframe like a car hitting a speed bump. This was quickly followed by a dense, pelting rain that foamed on the windscreen like the soap cycle of a car wash. We turned on the ignitors. I began to fear that I had been taken in by one of the oldest radar tricks in the book. The first band of rain at the head of the canyon was attenuating the echo and hiding the moderate to heavy rain beyond. The controller chimed in with helpful information. “I’m painting heavy to extreme precip from your ten o’clock to your two o’clock and stretching for about seven miles.” Now he tells us. “And then you’ll be in the clear.”

The turbulence ramped up quickly. About two minutes in, the autopilot disengaged after another series of “speed bumps.” I focused my attention on trying to keep the plane straight and level. The raindrops were big enough now that they sounded like BBs against the glass. My FO and I exchanged concerned looks. “Turn back, do you think?” He shrugged and pointed left, then right, indicating the thunderheads on either side. Despite my skepticism, the radar still seemed to indicate straight ahead as the logical route.

And then we were out in the wonderful clear sky with the lights of houses below and stars twinkling above. And it was smooth again, eerily smooth. Time for bad decision number three, or was it four? At this point, the smart thing to do would have been to continue straight ahead through the clear, smooth air to Nashville, land and have a Coke. Our favorite controller had other ideas. His voice crackled over the static-filled radio. “Turn right heading 180, base leg.” I looked at my FO. He shrugged. I turned south.

The ride down the final was a mini version of the downwind. We were pelted with rain, hit approximately 82 “speed bumps” and gratefully emerged from the mammatus-pouched overcast only to wrestle with the gusting 25-knot direct crosswind. As I taxied off the runway, I realized that my mouth was as dry as cotton, and the muscles in my arms were sore. I have never kissed the ground after a flight in 20 years at the airlines, but I will concede that I was tempted by that wet tarmac at gate C16.

I remember that night in Memphis with regret and perplexity. The decisions I made, in retrospect, puzzle me. I had planned properly for contingencies (extra fuel). I had negotiated the terms of the flight in my favor. I had a good crew and a good plane. I might have easily held at HOBRK for an hour or more if necessary. Or I could have diverted.

What puzzles me most about this memorable flight, however, are the passengers. Nearly every one stopped by the cockpit on the way out, not to criticize me for my poor decisions but to compliment us on getting them to Memphis safely. Notably, I remember a middle-aged man in a blue baseball cap who said, sincerely, “Thanks, captain, I’ll fly with you anytime.” I couldn’t bear to tell him the truth; I had made more mistakes and bad decisions on this flight than any other I had ever flown. Embarrassed, I smiled, and said, “Thanks.”