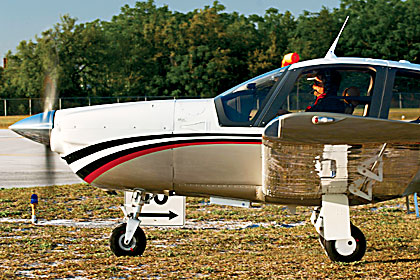 There’s no denying the fact that all pilots love airplanes and, if given the chance, they would all buy and own one. That’s the easy part. Buying one is a whole different story, however. And it all hinges on one seemingly simple query: How do you decide whether to buy a new or used airplane? Some may naively think that the answer is to subscribe to the “If you can afford new, then buy new; if you can’t, then buy used” theory. End of story. But as some may say, not so fast, my friend.

While money is the primary deciding factor, it’s not the only guideline that a smart prospective buyer should use. So let’s take a look at what elements should be considered and stick to the stuff that’s important to an individual who really has a decision to make and can afford to make it.

The Deciding Factors
Few prospective buyers realize it, but their level of experience is a big factor in determining whether to buy new or used. “Those who have just earned their pilot’s license 30 days ago don’t really know a great deal about aircraft ownership,” says Fred Ahles, president of Premier Aircraft Sales. “So buying a new airplane will take a lot of the stress out of the equation. There are no questions about an aircraft’s condition, value or safety—things that the buyer isn’t qualified to evaluate and things that can easily push the new pilot and first-time buyer to the overload point.”

“To evaluate the value of a used airplane, you have to do a lot of studying and homework about the market for that model,” adds John Foster, president of SkyTech. “What is significant and what isn’t in terms of the mechanical and physical condition, and how does that determine its true value?”

“Another factor in buying used is you have to determine early on what you’re willing to compromise,” he continues. “If you want a blue airplane, new Garmin radios or a low-time engine, you’ve instantly eliminated a percentage of the available fleet.”

Foster claims that prospective buyers have to be objective about each element and that they need to make that decision before shopping. If an airplane doesn’t meet the specific criteria, don’t even look at it. “You have to take the emotions out of it,” he stresses. “You really need to stick to your guns to avoid problems.”

“Because so much of what you need to decide is hard for a first-time, low-time pilot, my experience has been it makes for a much happier situation for that pilot to buy a new airplane,” says Ahles. “It eliminates all questions about true value, condition and equipment, and they can concentrate on selecting the right airplane for their needs.”

The Long Term
You also have to consider your ability to use the airplane that you end up buying. Most experts say that there’s nothing more expensive than an airplane that never gets flown.

Both Foster and Ahles say that if you’re a low-time pilot, you’d be much better off with a fixed-gear, four-place new airplane than a used high-performance retractable that costs the same to buy. “The low-time pilot is going to spend a lot more money on insurance, upkeep and training just to be able to fly the high-performance airplane,” says Ahles. “It’s smarter and safer to spend the money and buy the new fixed-gear airplane now, fly it for three to five years, then trade up to the higher-performance model.”

On the other hand, if you’re a more experienced pilot with an instrument rating, you need to look at the situation from a different perspective. “If you have your heart set on a Baron or a Meridian, then you’d be much better off buying the used high-performance airplane now,” says Foster. “To satisfy the insurance company, you’re going to need that high-performance retractable time in your logbook. So it’s smarter to spend the money now for the airplane that’s going to help you reach your goals in the future.”

“Look at your needs, your experience and your goals,” he adds. “People make a huge mistake by not looking at what buying a certain airplane today will mean to them three to five years down the road. You have to ask yourself that question and then go from there.” 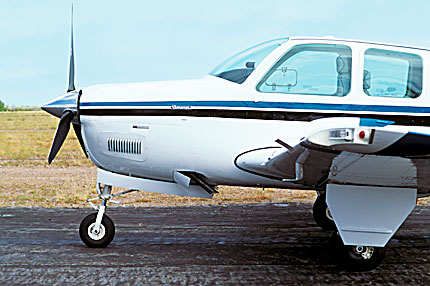 Dollars And Sense
Okay, so we’ve covered the roles, experience and mission profiles in determining whether to buy new or used. Now, it’s time to touch on money. “One of the simplest of guidelines is how much of a monthly payment you’re comfortable with,” says Ahles. “A new airplane will make it much easier to know exactly how much you’ll be spending each month for payments, insurance, fuel and hangar rentals.”

“With a used airplane, you don’t really know what your monthly expense will be,” he adds. “You could easily blow your budget with a single maintenance bill. That’s why we see the first-time buyer being happier with the decision to buy new.”

Another factor that’s tipping the scales heavily in the direction of buying new—at least for now—is the attractive tax incentives that are available. “In the 30 years that I’ve been selling airplanes, there have never been greater tax savings associated with the purchase of a new airplane than under the current Bush tax plan,” explains Ahles. “If you have any type of business use, it’s hard not to justify buying a new airplane today.”

Ahles says it’s important for prospective buyers to understand that they don’t have to be car dealers with stores in eight states or traveling salespeople to have a “business” use for a new airplane. “It’s available to anyone who leases his or her airplane back to an FBO or flight school during the week and then flies the airplane on weekends,” he says.

While the thought of an airplane with that “showroom fresh” scent, full warranty coverage and bonus depreciation tax savings are enough to push many buyers into the buy-new camp, savvy manufacturers frequently offer even more incentives to sweeten the deal.

For example, Cirrus Design is making what’s already the best-selling line of single-engine piston airplanes on the planet even more enticing by offering a brand-new Cirrus SRV for only $999 a month! “We’re offering aggressive financing. A buyer can get an SRV for under $1,000 a month, or an IFR-equipped SR22 for around $2,000 a month,” explains John Bingham, Cirrus’ executive vice president of sales and marketing. “We also offer an attractive program to help current aircraft owners quickly dispose of their used plane and make it easy to step up to a new model.”

Tiger Aircraft is also in the incentive mode, offering 40 hours of flight training and 40 hours of free fuel with each new Tiger sold. “Owners can use it for earning their license or for adding an instrument rating,” says Bill Crum, Tiger’s vice president of sales. “If they don’t want it, we’ll deduct it from the total selling price.”

Tiger also provides a free Total Customer Care Package for the first year of ownership, which covers the cost of the consumables that are not normally covered by the regular warranties for the airframe, engine, avionics or accessories. It also includes the first annual inspection. Some examples of items that are covered include tires, brake pads and lighting.

While they don’t have any financial incentives available right now, the big four—Cessna, Piper, Mooney and Beechcraft—have a major technical advantage to help sell their new models. All of them now offer their new piston models with the latest in PFD and MFD avionics packages for virtually the same price as the last generation of models with the “steam gauges.”

“Pilots who want the very latest have nowhere to turn but to buy new,” says Foster. “There is a wide gap in perceived value between the new digital cockpit airplanes and the older models that don’t have it. Even if the ‘older’ ones are three months old, they’re not ‘new’ anymore.”

The Final Verdict
“It’s really an apples-to-oranges comparison,” says Foster. “When you synthesize it, you’ll see that a new airplane will give you better financing terms and rates, full warranty coverage and multiple people with a vested interest in your happiness. There are a lot of pluses with that.

“But it all comes back to your mission profile and budget,” he concludes. “If you have an office that you have to visit 300 miles away, then it’s a no-brainer. You’re going to buy a new airplane today.”