If you’ve ever seen an aircraft made by Scaled Composites, you likely won’t forget it. Scaled Composites is the company behind SpaceShipOne (and SSTwo), their WhiteKnight launch vehicles and the Model 115 Starship—upon which the Beech Starship was based—to name a few. Their designs are always unconventional and even sometimes weird, but Scaled engineers are always innovating. 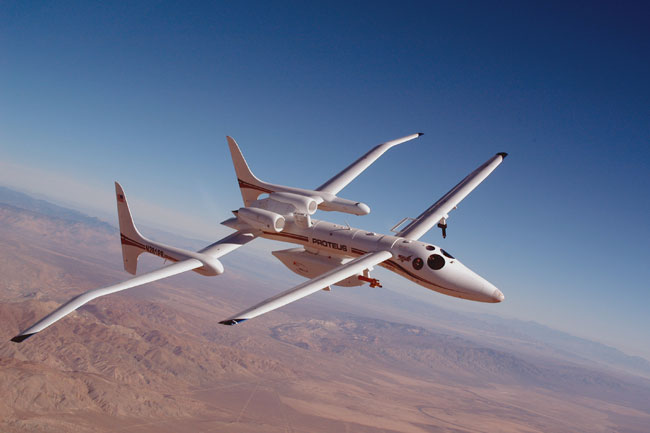 For those of you headed to AirVenture who haven’t gotten a chance to check out one of their aircraft up close, you’re in luck. Scaled Composites will be attending this year’s show, providing a great opportunity to take a look, not only at what the company has already done, but also what it plans to do in the future. Scaled’s plans include a full exhibit and more than 30 forums, and they also say they’ll set aside time to talk with people interested in careers with the company. Scaled Composites will also be bringing along its Proteus aircraft, which first appeared at Oshkosh in 1999.

It’s not as though the company is lacking for things to do. Its projects include the gigantic Stratolaunch Aircraft satellite launch platform, which some describe as the biggest airplane ever. Stratolaunch left its hanger for the first time last week to begin ground tests, so it will almost certainly not appear at AirVenture (if it could even find a place to park there). For this year at least, the company promises plenty of other highlights to share with AirVenture attendees.