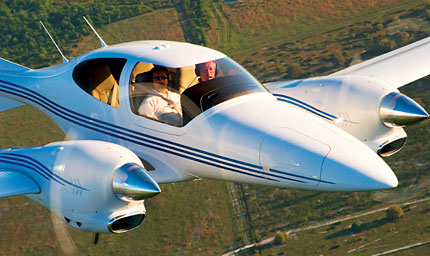 Okay, perhaps it’s true other countries outdo the USA when it comes to manufacturing automobiles, computers and TV sets, but there has never been any serious competition with America’s general aviation airplanes. Companies such as Piper, Cessna, Beech, Mooney, Maule, Cirrus, Lancair, American Champion, American General, Commander and Grumman-American have accounted for the vast majority of light aircraft sales in the last half-century.

Diamond Aircraft of Wiener Neustadt, Austria, wants to change that. Diamond is serious about selling airplanes on the world market, and it’s determined to challenge America’s supremacy in light aircraft sales. Diamond has been building the HK-36 motorglider for years, and it applied the same high-lift technology to the DA20 Katana in 1995. Since then, the company has progressively modified and improved its product line and has made significant inroads in North America, selling more than 400 of the two-seat Katana trainers and another 250 DA20-C1s (essentially the same airframe, but with a 125 hp Continental in place of the 81 hp Rotax 912). The DA20-C1 is truly a second-generation improvement of the DV/DA20 Katana. The C1 underwent a complete redesign, and while it looks pretty much the same, there are no common parts from the predecessor DV20/DA20-A1.

Diamond’s penetration into the American trainer market was reinforced in 2002 when it began delivering DA20-C1s to the USAF for primary flight training at the Air Force Academy in Colorado Springs, Colo. Beginning in 2000, the company began marketing the stretched, four-seat DA40 Diamond Stars, and over 400 airplanes later, Diamond has effectively stolen sales from Piper’s Archer, Cessna’s Skyhawk and Skyhawk SP and Cirrus’ SR-20.

Now, Diamond has launched a take-no-prisoners assault on the light-light twin market. The all-carbon-fiber Diamond DA42 Twin Star is the first new twin in nearly a quarter-century. It’s tempting to label the new Twin Star as simply a multi-engine version of the elegant Star, but while the new model’s fuselage and tail are admittedly adaptations of the single (with the addition of a forward baggage compartment in the airplane’s stiletto nose), the DA42 is much more than “simply” a Star with two engines.

Certainly, the Twin Star’s most innovative feature is its pair of Thielert Centurion 1.7, water-cooled, turbo-diesel engines, rated for 135 hp each. Diesels have been used for decades on cars and trucks and have proven remarkably reliable and efficient. The Thielert Aircraft Engines used on the Twin Star are essentially adapted versions of powerplants employed on Mercedes diesels. Diamond mounts composite, three-blade, constant-speed, MT propellers as standard.

Perhaps the primary deficit of diesels for aircraft use is the weight of the engine. Diesels are inherently heavier than piston powerplants, as much as 20% more, and weight is critical on airplanes. In exchange for that deficiency, however, diesels offer rugged reliability and remarkable fuel efficiency, burning cheaper diesel or jet fuel.

In fact, however, it’s unlikely many pilots will choose to burn diesel, even if they can find it. Diesel fuel is fairly dense and weighs in at more than 7.1 pounds per gallon, compared to 6.7 pounds for jet fuel and 6.0 pounds for avgas. In the U.S., it’s likely all DA42s will operate on Jet-A.

A typical specific fuel consumption for a general-aviation piston engine is .42 to .45 pounds per hp per hour. In contrast, diesels regularly achieve sfcs of .35 pounds per hp per hour or better, especially when operated at low power settings. This 20% advantage is partially offset by the fact that jet fuel is 10% heavier than avgas.

(Even so, there’s little question that diesels are several orders of magnitude more efficient than piston products. A Diamond factory pilot, returning to Austria after the 2004 EAA AirVenture, flew 1,900 nm nonstop across the Atlantic from St. Johns, Newfoundland, to Porto, Portugal. He set power at 42% for the crossing and burned only 72 gallons of jet fuel. Average consumption was a mere 2.9 gallons per engine per hour, or 5.8 gph total. Average groundspeed worked out to 152 knots with the help of 20-knot tailwinds.)

Certainly, flying behind turbo-diesels will demand some attitude adjustments. For one thing, starts are very different from piston practices, read that as easier. Power is controlled by a single lever. Turn on both engine control units (ECUs), wait for the glow plug annunciator lights to extinguish, then twist the key. FADEC (Full Authority Digital Engine Control) does the rest, optimizing timing for all phases of flight, startup, climb and cruise. The runup is similarly uncomplicated. Press the ECU test buttons, and the system goes through its own self-diagnostics. After that, you’re ready to fly.

Power up for takeoff, and you’re looking at a startling 76 inches of manifold pressure. (Not to worry, diesels run much hotter than pistons and are designed for such big numbers.) Takeoff power generates a ridiculously low 8.1 gph per engine, your first hint of the efficiency that’s possible with diesels.

The TAE turbo-diesel’s critical altitude is a fairly low 5,500 feet, above which power begins to bleed off. This is primarily a function of the need to keep the engines cool. Max operating altitude is listed as 18,000 feet. Remember, that’s a max operating altitude, dictated more by systems limitations rather than performance, not a service ceiling.

Hold the 83-knot Vyse after rotation and cleanup, and you’ll see initial climb rates around 1,500 fpm, not that dissimilar from other light-light twins. Few thinking pilots climb at Vy, and pushing over to 100 to 110 knots still generates 1,000 fpm. Just as with the single-engine Star, the Twin Star’s single-piece canopy allows excellent visibility, with only the airspace directly above the pilot blocked off to allow for a semblance of shade.

Level in cruise, the Twin Star enjoys excellent economy. Eighty-five percent cruise burns only 6.3 gph per engine and currently generates about 165 to 170 knots. (Engineering numbers suggested a speed of 183 knots, and Diamond is still tweaking toward that goal.) That’s better than 13 nmpg—in a twin. Consider that the next most efficient production twin, Piper’s Twin Comanche, delivers only about 165 knots on 17 gph, roughly 10 nmpg.

The Twin Star is not simply an alternative to current light twin trainers. Diamond also views the airplane as a viable alternative to high-performance singles. Airplanes operated in instrument conditions, at night and over inhospitable terrain should have powerplant redundancy. Add known icing protection, and it becomes the safest choice for a serious cross-country airplane.

For Twin Stars used in multi-engine training, the airplane has been designed with extremely docile single-engine characteristics. Vmc (single-engine minimum control speed) has been set at 68 knots with either surviving engine generating full power, and Diamond claims a sea-level, single-engine climb of 500 fpm at a Vyse of 83 knots.

Unlike the Seneca and Seminole that employ counter-rotating propellers, the DA42 turns both engines left, so the left mill is critical. In other words, you’ll generate more of a rolling moment if the left engine fails than if the right quits. Fortunately, an electrohydraulic auto-feather system will sense any failure and allow the prop to move to the low-drag feathered position with a minimum of fuss. It’s interesting to note that the Twin Star’s dirty stall is 56 knots, only 12 knots below Vmc. Certainly, you could fly the airplane into an asymmetric power roll, but you’d have to be asleep not to notice it coming.

In keeping with the universal principle of TINSTAAFL (There Is No Such Thing As A Free Lunch), the diesel makes some trade-offs in exchange for its remarkable economy. Partially for that reason, Diamond is currently flight-testing a Lycoming version of the Twin Star that may be fitted with all-metal Hartzell propellers rather than the standard airplane’s composite MTs. With a pair of 180 hp IO-360s mounted on the wings, the Americanized Diamond twin will sport an extra 90 hp over the TAE airplane, and with the same 3,748-pound gross weight (1,700 kilograms in Euro-speak), that should translate to a true rocket ship in climb. Standard empty weight is listed as 2,400 pounds on both Twin Stars, but in the real world, the diesel may weigh in slightly heavier. A gross weight increase is also being investigated by Diamond.

Similarly, I’d bet cruise in the Lycoming-powered Twin Star at typical normally aspirated altitudes will be at least 185 knots. This airplane may be more attractive to private owners because of higher speeds and better climb, neither especially important attributes for a trainer. With the benefit of turbocharging, however, the Thielert model should surpass the Lycoming Twin Star in both climb and cruise above 12,000 feet.

Since announcing the Twin Star three years ago, certification and production timetables have been pushed back several times, and the latest schedule doesn’t call for North American deliveries until the Q1 of 2006. Delays in the Twin Star program have been partially a function of certification problems in Europe on the Garmin G1000 that comes standard on the DA42, as well as waiting for the establishment of suitable levels of technical service capability for the diesel engines in the U.S.

Another significant delay was related to the Thielert engine’s liquid cooling system. Diesels generate massive amounts of heat, and despite the use of intercoolers and liquid cooling, Diamond had to go back to the drawing board to come up with adequate cooling for high-altitude operation. Engine heat has been a consistent problem on the diesel, despite the use of four cooling radiators.

If anyone can solve such problems, however, Diamond can. The company has more experience than practically anyone with aircraft diesel engines. Diamond already has delivered some 150 diesel-powered Stars in Europe, and it has learned quite a bit about the Thielert Centurions in actual service. Time between replacement (TBR) on the Thielerts is currently 1,000 hours, but Diamond is now hard at work to upgrade that to 2,400 hours. Rather than overhaul the engines, you’ll replace everything from the firewall forward for about $25,000 a side.

Standard equipment on the Twin Star will include a basic version of the aforementioned Garmin G-1000, full leather and a KAP-140 autopilot. The option list will feature a TKS anti-ice and de-ice system, oxygen, mode-S transponder with TIS uplink, XM Satellite Weather and, on the DA42-360 only, air conditioning.

As we go to press, Diamond president and CEO Christian Dries is gauging market interest on a pair of new101 hp engines—one gas, one diesel—for possible retrofit to Katanas and the HK36 motorgliders. Diamond also will build a new manufacturing facility in Beijing, China, to support a variety of the company’s products in the Asian marketplace. A Diamond’s Canadian factory in London, Ontario, has produced 1,000 airplanes since it started deliveries there in 1995. Production capacity continues to grow to meet North American demand.

Every technology upgrade has its challenges, but in either of its two iterations, Diamond’s Twin Star is an impressive example of fresh thinking, with exciting new design features, strong performance and a formidable challenge to American manufacturers.