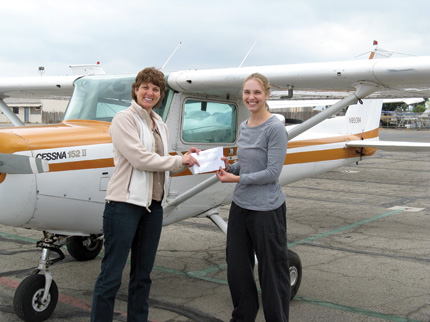 Who’s the judge beside you in the cockpit, deciding whether you’re worthy of receiving aviation’s highest honor (a license to learn)? Hopefully, it’s someone who’ll make your entry into the world of aviation less than turbulent.

For me, becoming an FAA examiner has been a four-year effort. After the evaluation and verification of my designated pilot examiner (DPE) application, I became eligible to take the predesignation knowledge test. Next, I spent a week in Oklahoma City for the Initial Pilot Examiner Standardization Seminar. I waded in the shallow end of the examiner candidate pool until I was selected for designation by my local FSDO. Finally, my oral exam and flight test with an aviation safety inspector ended with a thumbs-up. Here’s a look back at the challenges, fun and “oops!” of my first year as a DPE.

January–February
The FAA requires new DPEs to perform a year’s worth of private pilot checkrides before they can request the next level of instrument and commercial privileges. Generally, a certain amount of annual activity is required for the renewal of examiner designations. As a new DPE, it’d be appropriate for me to conduct 10 tests this year; as of February, I’m on number three. I wonder if the learning curve will be greater for me or for my applicants.

I try to present a friendly and comfortable atmosphere to the applicant, but I do expect a certain level of etiquette equivalent to a job or airline interview. Making a good first impression goes a long way toward the four or five hours we’ll be spending together. Emily Post suggests being on time and polite, and looking sharp—to that I would add having all paperwork in order. So far, each of my applicants has provided me with an exceptionally positive experience—a credit to their instructors. Each satisfactorily met the performance standards as painstakingly detailed by the FAA’s Practical Test Standards (PTS).

For my first applicant, English was a second language, so while he demonstrated competency, his oral exam took longer to complete. I advise my applicants to ask themselves whether their answers make sense before actually responding. For example, could the length of an uncontrolled airport runway really be 60,000 feet? If the aircraft is lined up on runway 9, heading east, then does it make sense that the compass reads 270 degrees? Unless you know exactly what’s horizontally opposed under that cowling, don’t mention it in a dazzling display of your rote-memorization skills. 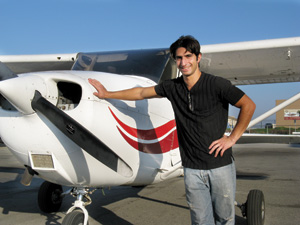 March–April
One determined 54-year-old applicant demonstrated his desire to succeed by arriving well prepared and early—all points on his side. His flight plan form, however, lacked a column for fuel burn, which prompted me to ask: Will you run out of fuel over a mountain, lake or desert? Seems important to me.
Advertisement

Two other applicants neglected to bring to the exam, as previously assigned, weather reports, charts and forecasts. Weather is available online or from a live briefer on the phone. Per the PTS, applicants are required to exhibit knowledge related to weather information from various sources. Analyzing the unfamiliar props supplied by the examiner is a lot more difficult than bringing and decoding your own weather documents.

During one exam, with the oral portion completed, the applicant and I made our way to the ramp. My applicant inquired whether I’d prefer that he perform a full or an abbreviated preflight. Abbreviated preflight? Fascinating. Never in my general aviation career had I heard of such a thing.

“Explain, exactly, the difference between a full and an abbreviated preflight,” I asked. “Well, I filled the tanks just this morning before I flew over,” he answered. “So you would leave your rental aircraft for three hours on a working ramp at an unfamiliar airport without checking the fuel, in this economy? I’m not getting in.” We didn’t go flying until we visually verified that there was enough fuel and until I was satisfied with the completed preflight inspection.

May–June
My latest checkrides have been a revelation: We U.S. citizens are extremely lucky to have relatively unlimited access to our skies. I’ve now completed eight checkrides, and some of my applicants have come from as far as Taiwan, Korea and Mexico; in some cases, these students will return to their home countries to pursue aviation careers.

Many countries don’t have enough nationals to fly their airliners, and their respective regulations and training programs are very complex and extensive, resulting in high failure rates. In Japan, for example, instruction in radio law and engineering culminates in a written exam—which is necessary in order to get a Japanese radio station license from the Ministry of Posts and Telecommunications—that’s only offered at a handful of times and places. (The FCC’s equivalent is no longer a requirement for U.S. pilots.) I underwent the arduous process of a six-month training period and exam to get a B747 type rating through Japan Airlines’ training center in Tokyo. This experience made me realize that despite the difficult-to-decipher FARs, pilots in the States benefit from a user-friendly system that enables them to safely navigate some of the world’s most congested airspace.

Americans have an enviable freedom to pursue their aviation dreams. The United States is world renowned for offering top-notch training, private through airline. There are international flight schools in the U.S., and our pilots are in demand on international crews. It’s a privilege to be a U.S. student pilot, just as it’s a privilege to be a flight instructor and DPE here.

July–August
Anyone who’s interested in an aviation career knows that he or she will probably be working on holidays and weekends. (For Valentine’s Day, my husband had dinner with Captain Steve in San Antonio while I tested applicant number nine, an aspiring Navy flight surgeon.) Those who intend to enter the aviation industry shouldn’t hold holidays, weekends or summers sacred. If you don’t want to work on Christmas or your kid’s first birthday, then the airlines may not be for you. At least, not until you’ve accumulated decades of seniority. (I barely blinked an eye when I had to change my wedding date to accommodate my upgrade training from L-1011 flight engineer to MD-80 first officer.)

Advertisement
September–October
All of my applicants are on a journey to achieve their flying goals, and many will need to overcome obstacles along the way. A 22-year-old Salvadoran whose dream is to become a TACA (Central American Air Transport) pilot and a 70-year-old Englishman who came to this country decades ago received my first two Notices of Disapproval. Yes, I finally experienced a checkride failure.

Keep in mind that DPEs really mean it when they say, “Today, you didn’t meet the standards set forth by the FAA in the PTS.” Applicants who receive Notices of Disapproval only need to receive additional instruction in the areas where they were found deficient and a couple of logbook sign-offs before they’re allowed to retest. Still, dreams can be delicate things, and when the younger applicant came back into my office, he sat down gravely and politely asked my professional opinion: “Do you think I should abandon my dreams of becoming a TACA pilot?”

I wanted to melt right into my chair; I didn’t want to be known as the “dream crusher.” Of course, he didn’t realize that acquiring your private pilot license later than originally scheduled is merely a bump in the road. [Note: A month after not passing the ground portion of the practical exam, the Englishman returned, exhibiting newfound appreciation for the knowledge he had gained. Both he and the young Salvadoran are now licensed private pilots who are, deservedly, proud to fly.]

November–December
Now that it’s all said and done, after one year as a DPE, I’ve actually completed 24 checkrides, more than double the minimum number required. My DPE status will be upgraded to that of CIRE, commercial instrument and rating examiner.

On a checkride, the roles are fairly well defined: It’s the instructor’s job to teach; the applicant’s job to demonstrate; and the examiner’s job to evaluate. I make every effort to provide a calm and relaxed atmosphere, but I don’t blur the line by teaching. As the PTS states: “To evaluate the applicant’s ability to utilize proper control techniques while dividing attention both inside and/or outside the cockpit, the examiner shall cause realistic distractions during the flight portion of the practical test to evaluate the applicant’s ability to divide attention while maintaining safe flight.” From here on out, all aeronautical decisions now are being made solely by the applicant. Remember, when you’re flying with the DPE, you’re the PIC, and whether it leads to an airline career or simply the ability to fly your own small plane, this is the beginning of your journey into aviation. Safe flying, and thanks for the ride!

Andrea Eldridge is a former TWA pilot with 757/767 type and L-1011 flight-engineer ratings. She’s a Gold Seal CFII/MEI who, currently, flies a 1947 Luscombe 8A and enjoys being a DPE.