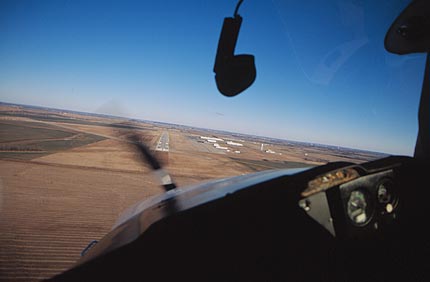 This is how it happens. The pilot turns base to final and notices a following wind is causing him to overshoot the centerline. He adds a little left uncoordinated rudder in an attempt to bring the nose of the aircraft back toward the runway. The aircraft rolls a bit to the left and he compensates by adding some right aileron to hold the 30-degree bank angle. The nose also drops slightly, so he compensates by pulling back a bit on the yoke or stick and adding a little power to maintain airspeed. Suddenly, the aircraft snap-rolls left to 150 degrees of bank. He instinctively pulls back on the yoke or stick to get the nose back to the horizon and, at the same time, uses aileron to turn the aircraft back to the right. Without warning, the airplane stalls, rolls inverted and spirals into the ground.

For pilots who are constantly drilled on recognizing characteristics of insipient stalls, why does this stall-and-spin scenario continue to happen frequently with fatal consequences? Why do pilots who recover from every other type of stall seem unable to recover from this one? The reason is simple. This stall occurs without warning.

The Stall
A stall is nothing more than exceeding the critical angle of attack (AOA). The airflow over the top of the wing starts to separate (otherwise known as boundary layer separation), and we experience a loss of lift. Where on the wing the stall occurs, how the stall progresses and how we know in the cockpit that we’re approaching or actually in a stall can depend on many things, including wing shape, tapering, wing twist, boundary layer enhancers (BLEs), stall strips, vortex generators, washout, etc. Understanding how this stall in the traffic pattern can surprise even the most experienced pilots begins with a look at how wing designs stall differently.

General-Aviation Wing Stall Characteristics
Most GA aircraft today have wings designed to stall at or near the wing root first, then progress out toward the wingtips. This is a good thing because as the wing root area stalls, it generates turbulent air that flows over the elevator and around the fuselage. We feel it in the cockpit and on the yoke or stick as stall buffet—a warning to recover by reducing AOA. 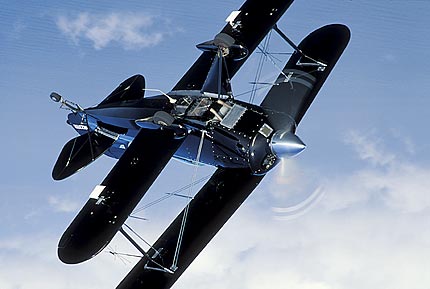 Swept-Wing Stall Characteristics
A swept wing stalls at the wingtip first and progresses inboard. The interrupted airflow doesn’t get to the elevator and fuse. Therefore, there is no stall buffet to warn you—nothing. So how do we know when we’re approaching or actually in a stall with a swept wing? The designers usually give us an artificial stick-shaker that activates at an AOA just below the stall.

Knowing what we now know, let’s imagine the airflow of the relative wind over the wing of a general-aviation wing. When the pilot inputs rudder and aileron to correct an overshoot situation on his turn from base to final, he cocks the airplane into the relative wind (a skid). Now his wing is no longer perpendicular to the airflow; it’s meeting the airflow at a “swept” angle. By skidding the airplane, the pilot has, in effect, converted his GA airplane into an aircraft with a swept wing. And in the absence of a stick shaker, swept wings stall without warning. That’s why the skidding base-to-final stall is so deadly.

How fast does the aircraft roll when it enters a skidded stall? It can be pretty eye-watering. The Extra 300/L will roll to approximately 150 degrees of bank in less than a second! A Cessna 140 does pretty much the same thing. First reactions at 500 feet AGL can seal the outcome. Most folks will instinctively pull on the pole when inverted. This intuitive reaction is the last thing you want to do. Pulling pitches the nose toward the ground and more than likely keeps us in the stall. The other intuitive reaction is to attempt to roll the aircraft with ailerons to level the wings (right roll input in this case). The result: an even more rapid roll to the left. The bottom line: Intuitive recovery techniques don’t work. So how do we get out of this beast and get our bodies and our aerial conveyance vehicle safely back on terra firma?

Survive A Traffic-Pattern Stall
1 Pressure. The first step in any stall recovery is to reduce AOA below critical AOA. We do this by removing the input that got us into the stall to begin with—the elevator. So relax the elevator pressure.

2 Power. Power should be used as required. It helps overcome increased drag from uncoordinated flight and helps increase airspeed. This helps increase lift, which is what you need at this point. If the aircraft is excessively nose-low, pulling the power to idle may be the option of choice.

3 Rudder. We don’t want to use the ailerons to roll the aircraft in a stall because we know they can be unreliable (reverse aileron effect). We also know that once we break the stall, the ailerons are our best roll mechanism. But we have to give the first step in the recovery (pressure) a chance to get us below critical AOA before we can safely use the ailerons. In the meantime, our best roll mechanism in the stall is rudder. Rudder application in the direction of the desired roll should be used for two reasons: 1) It helps counter adverse yaw, which can happen when we have a differential in the drag on each wing. The stalled wing, in this case the left wing, has more drag than the right due to the higher AOA. 2) Rudder application helps roll the aircraft in the direction of the applied rudder. Once the aircraft is below critical AOA, the ailerons then can be safely used to complete the roll to wings level. How much rudder should be used? The answer is not much. Brief rudder application also allows the aircraft to remain fairly coordinated throughout the recovery. This decreases stall speed and can help expedite the recovery.

4 Level Off. Straighten out the wings. Use rudder to initially start the roll while stalled, and as the AOA reduces to below critical AOA, follow through with the ailerons to level the wings. This orients our lift vector in the vertical, which maximizes our vertical component of lift and minimizes our altitude loss.

5 Climb. Look for two positive rates of climb, usually found on the altimeter and the VVI (or VSI).

When An Overshoot Does Occur
1 Increase your bank angle to tighten up your turn.

2 Use the slip method—top rudder with bottom aileron. At least if you stall out of this, the stall goes over the top and isn’t so disorienting. Again, a slipping stall also is a cross-controlled stall and there will be little to no warning of an impending stall. The recovery, however, is exactly the same as that discussed above.

3 Most importantly, get proper training. Fighter Combat International, where I teach, in Arizona, has a great Upset Recovery Training program with qualified instructors. There are other programs across the country. Reading and doing are two separate worlds—the training is invaluable and could save your life. Get it from somewhere. Learning spin entries and recoveries at 500 feet AGL is no place to start your training.