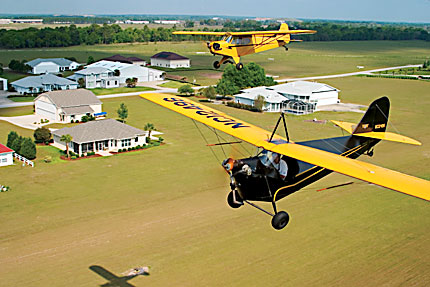 Jimmy Leeward really never had much of a chance. His parents eloped in an Aeronca C-3. The couple settled down on a grass strip outside of Tarentum, Pa., and as soon as Jimmy could walk, he was at the airport, cleaning and eventually working on many airplanes. Of course, he, too, would become a pilot.

“Every summer, I lived at the airport. I worked during the day and slept at night in a hangar,” remembers Leeward. “In the evenings, I would just fly anything we had on the field. There wasn’t much of a checkout of anything; I just flew.”

Al Leeward, Jimmy’s father, did about anything he could to make a living in the flying business. He sold aircraft, flew charter and he even delivered the mail in a Stinson SR-9. On weekends, he flew air shows, performed parachute jumps and taught his wife, Ginny, to fly. Needless to say, it was an all-aviation family.

“When Dad would buy an airplane, we would head out to pick it up. We would just get in it and fly it back; it didn’t matter if it was a twin or a single. We had to get it home somehow; we owned it, so we flew it. Running a dealership, instructing, doing air shows kept us pretty busy.”

But one day, Al said to Jimmy, “You know, this is a hard, up-and-down business. If you really like flying, you should do something else and fly for fun; that way, you won’t spoil it.” It was sage, fatherly advice.

“Lots of people fly for a living, and they don’t like it anymore,” says Jimmy. “My dad’s advice made sense to me, and so I got into real estate. Eventually, I moved to Florida and built retirement homes for folks moving here from the Northeast. Then I branched out into residential and commercial development.”

He followed his father’s sage suggestion to the letter. While he completed successful real-estate projects, Jimmy continued to fly—just for fun. Lots of fun!

In 1986, Jimmy’s Cloud Dance, a stock P-51 Mustang, won the unlimited silver race at the Reno Air Races. He also flew the first jet races there in a MiG-17. Jimmy and his two sons, Chad and Dirk, fly in air shows all over the country and are heavily involved with the EAA.

Naturally, Jimmy taught both of his sons to fly—in a J-3 Cub. “But when it came time for Dirk to do his solo,” remembers Jimmy, “I wanted to make his first solo quite special, so on his 16th birthday, he soloed in the P-51. Then he flew the Cub, the T-6 and a friend’s Stearman, all within an hour. As a matter of fact, his very first flight in the Stearman was solo. Not too bad for your first solo and your 16th birthday!”

And it was soon after that, in high school, when Dirk took on a project of designing an airfield, referring to an FAA Airport Design Advisory Circular as his main resource. After he went to great lengths of actually getting an engineer involved, it was too much of a temptation for the whole Leeward clan to resist. The end result was the Leeward Air Ranch, a 6,200-foot, immaculately groomed grass strip north of Ocala, Fla. Jimmy and his family had come full circle by developing real estate around a runway.

“In 1980, we started putting the Air Ranch together. Dirk and I built the runway together. We ran the bulldozer and stripped as much as six to eight feet of dirt from the ground. We replaced it with sand and clay, and then seeded it with Argentine Bahia grass. It’s a resilient grass.”

“Dirk and I are partners in this,” continues Jimmy. “And, so far, we’ve developed most of the west side; there are almost 200 homes here. We just started on the east side, and Dirk is building his own house next to our old gray barn of a hangar. We’ve had jets fly in and out; a B-25 used to live here, and we’ve even had B-17 hop rides from the Air Ranch. The runway is dry enough to use within an hour of the heaviest rain we’ve ever had. There are only a few rules here. First, to buy a home here, you have to be a pilot with a current medical. Second, each house has to have a hangar with an airplane in it. And third, I guess, is that you’ve got to love flying. Everyone else here does.

“My son, Chad, is selling Pilatus aircraft now,” explains Jimmy. “Dirk is teaching his son, Ryan, to fly in our Cub. His daughter likes to fly as well. He’s making flying a four-generation Leeward tradition. Dirk and Donna went on their honeymoon in his Ryan SCW.”

Jimmy had received an interesting piece of his family puzzle with the arrival of a letter just a few years ago. “This fellow wrote me a letter saying that he’s restoring an Aeronca C-3 and found my dad’s name on the owner’s list. Well, I went through our family scrapbook, and we soon found an article written about my dad and mom’s elopement. There was a picture of the airplane, and you could just make out the tail number—it was the same airplane that my mother and father flew off in to get married!”

Jimmy continues, “One thing led to another, and before long, we bought it from him. It’s pretty cool to be able to fly the same airplane they took on their honeymoon. It’s not fast, but then again, neither is our Cub.”

But speed isn’t always the priority for Jimmy Leeward. It’s keeping flying as a family tradition.