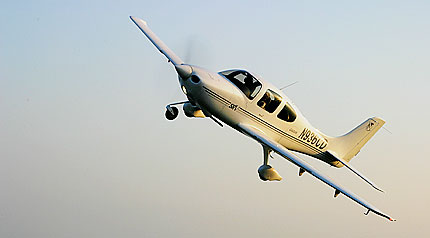 Downscaling an existing model isn’t a new trick. Piper has done it a number of times with the Cherokee 140 and Warrior. Maule offered a less powerful, nosewheel trainer version of its M7 bush bird taildragger. SOCATA continues to produce an entry-level model in the Tampico, essentially the same airplane as the Trinidad sans retractable gear and constant-speed prop, and with 90 less hp.

So why not, reasoned the management team at Cirrus, offer a simpler, trainer model of the company’s popular, composite SR20 four-seat single? Excluding the only two-seat trainers still available, Diamond’s C1 and American Champion’s Aurora, the three most popular trainers on the market continue to be the 160-hp and 180-hp Cessna Skyhawks and the New Piper Warrior. All three latter models are conventional 2+2 designs readily adaptable to training mode and popular with schools such as UND, Embry-Riddle and other aviation academies.

Cirrus was convinced its entry-level airplane could fulfill the basic training mission and do it with considerably more performance than the other three models. Since introduction of the SR20 in late 1998, Cirrus has sold some 300 of the type, competing primarily with the Cessna Skylane and, to a lesser extent, the Commander 115 and Piper Arrow. In the same time period, Cessna sold some 900 normally aspirated and turbocharged 182s, so while Cirrus has definitely made a dent in Cessna sales, the world’s largest producer of aircraft continues to lead the industry.

Meanwhile, the follow-on, more powerful SR22 has become by far Cirrus’ most popular airplane, competing favorably with the Mooney Ovation, Raytheon Bonanzas and the Lancair Columbia 300. Last summer, Cirrus celebrated production of its 1,000th airplane, and nearly 700 of those were SR22s. Nevertheless, the first Cirus Design entry continues to make friends among new pilots and old aviators alike.

Even in standard trim, however, the basic SR20 was too much airplane for the training mission. The price disparity was at least $30,000 between the Cirrus and the Piper/Cessna basic four-seaters, and in the under-$200,000 class, that was a huge gap. Flight schools often succeed or fail on their rental rates, and no matter what its talents, the SR20’s higher sticker price guaranteed it had little chance to compete.

That’s not to suggest the elevated tab wasn’t without its justifications. After all, the SR20 was one of the most revolutionary airplanes to come along in the century since man taught wood, fabric and metal to fly. It was one of the first successful certified, all-composite machines, constructed of Scotchply SP381, a material specifically developed for Cirrus by 3M. SP381 produces a remarkably smooth surface, perfectly suited for airfoils, without the parasite drag associated with rivet heads or section lines. Scotchply isn’t as heat-sensitive or subject to embrittlement as previous materials, but it’s more than coincidence that most Cirrus airplanes are painted white with minimum striping.

Performance numbers for the standard SR20 also were in a different class, and the standard avionics package was notably more talented than that of the competition. At max cruise power, the SR20 ripped along at least 30 knots quicker than the fastest of the other three. Climb was 25 percent better than the pack, and service ceiling topped out a minimum of 3,500 feet higher than the Piper and Cessna entries.

Accordingly, Cirrus set out to build a simplified, less costly variant of the SR20, one that could compete more favorably with the crowd without any major changes to its running gear or any significant loss of its performance margin. Cirrus left the BRS parachute system in place behind the cabin because it has ultimate faith in its Cirrus Airframe Parachute, and removing it is a compromise the company is unwilling to make on any of its airplanes.
Advertisement

Considering that the finished airplane would be intended primarily as a VFR trainer and therefore not obliged to shoot instrument approaches, Cirrus switched to a Garmin 420 as the nav system, essentially the same box as the Garmin 430, but without VHF/NAV capability. Cirrus Design also left out the SR20’s second GPS/COM (a Garmin 250XL) and the backup alternator. This meant total trust in the GPS satellite navigation system (no VOR or ILS nav possible), but Cirrus has always been more willing than other manufacturers to trust in modern technology. Trainers normally don’t have much use for autopilots, so Cirrus dispensed with the S-TEC 55SR, standard on the SR20. Other missing features are the HID landing light, the nosegear fairing and noise-canceling power jacks for the headsets.

These economy measures reduce the price of admission an impressive $40,000 and result in the Cirrus SRV, introduced at last year’s EAA AirVenture Oshkosh. If you hadn’t already guessed, the V stands for VFR, as the basic airplane is intended for VFR-only operation with an Avidyne Entegra Primary Flight Display (PFD) limited to visual flight rules. You can add most of the options available on the SR20 if you wish, everything from Stormscope, autopilot and a PFD upgrade to leather interior, a three-blade prop and a variety of other items. In theory, you could spend nearly $75,000 for options, though if you were so inclined, you’d be better off buying the IFR-certified SR20 as a platform.

It’s apparent from the numbers in our comparison chart that the SRV has a major advantage in virtually all areas of performance except takeoff and landing distance. That’s partially a function of the airplane’s high 9.0 aspect ratio, NLF wing, actually a combination of several NASA airfoils. This provides good high-altitude capability, a major benefit for flight schools located in the western U.S. where summertime density altitudes can reach five figures. For many airplanes at airports in New Mexico, Colorado, Utah, Wyoming and much of the mountain west, takeoff and climb performance can be so severely compromised in summer that it becomes difficult or impossible to conduct normal flight-training operations. With 20 to 40 hp more than the others and a high aspect wing, the Cirrus isn’t so drastically affected by operation in thin air.

Strong cruise performance isn’t very important in a trainer, and for that reason, some flight schools will probably use instructional power settings for cruise on the V, 55 percent or less. That should generate 135 knots in exchange for 8.5 gph. More than coincidentally, that’s nearly the same fuel burn you’ll see in the Skyhawk R and Warrior (at 75 percent), and you’ll be flying at least 10 knots faster. (In case you were wondering why the SRV lost six knots of cruise with the same power and gross weight, the answer is the loss of the nosegear fairing.)

High cruise numbers aren’t inconsistent with the training mission as long as the airplane has low approach speeds, and the Cirrus SRV should qualify. Dirty stall is only 54 knots, and while that’s still several knots faster than the competition, approaches can be flown at 75 knots without pushing the envelope. That’s only about five knots quicker than normal approach speeds in the Skyhawk and Warrior, so Cirrus pilots needn’t feel unduly rushed.

No one can guess how well new student pilots will take to the Cirrus SRV, but I’ll bet they’ll love it. The generic Cirrus cockpit is wide and comfortable, 49 inches across with doors on both sides, specifically designed around the dimensions of a BMW 5-series sedan. Both cabin doors open forward and up in modified gull-wing fashion, providing excellent access to either front or rear seats.

Advertisement
Unlike most automobiles, airplanes must be designed with concern for aerodynamic drag, so there was no realistic way to duplicate the Beamer’s dimensions in the sky, but Cirrus came as close as it could without increasing equivalent flat plate area to unacceptable extremes. Cirrus has done everything possible to make the cabin feel upscale-automotive in concept, and it shows. Student or ATP, the pilot is bound to be impressed with the roomy, uncluttered flight deck.

Long before Cirrus designers Alan and Dale Klapmeier began building on their idea of the first Cirrus, they surveyed a number of student pilots to determine the students’ worst fears. In answer to those concerns, the ballistic parachute helps allay the greatest fear of new pilots, an off-airport, emergency landing following an engine failure. The standard Garmin GPS satellite navigation system and Avidyne PFD address the second greatest fear, getting lost.

The side stick controller also should be a special joy to new aviators. At this writing, only Cirrus and Lancair have embraced side sticks for roll/pitch control on production airplanes, but don’t be surprised if you see them popping up more often in the near future. Adam Aircraft will be using a side stick on its new centerline thrust twin. When properly executed as on the Cirrus SRV, with forearm-fitted armrests and angled handgrip installation, side sticks can be nearly effortless to operate. The stick shafts translate forward or aft automatically with any pitch trim change, and the trim position indicator is mounted on the side stick shaft. All the Cirrus models employ a light breakout control force, a soft spring-loading that returns the stick to neutral in both pitch and roll when released. That should endear the airplane to new pilots, as well.

Transitioning pilots usually find the switch from a yoke or joystick to a side stick easy and comfortable, and ab initio flight students will probably enjoy that indefinable feeling of being one with the airplane rather than merely an operator. Side sticks most often are associated with lightning-fast control response in jet fighters such as the F-16, but the Cirrus’ controls strike a happy balance between too quick and too heavy.

The SRV maneuvers with more enthusiasm than virtually any other fixed-gear non-aerobatic single, not quite in the Bonanza/Bellanca class, but quick enough to make flying the airplane fun. Specifically, pitch responds at something like five pounds per G and roll rate is nearly 50 degrees/second. Landings are no more challenging than in a Skyhawk or Warrior, appropriate since that’s the competition.

Every aircraft design represents a package of compromises, and the phenomenal success of the Cirrus SR20 and SR22 suggest the pilot public agrees with Cirrus’ choices. Yes, it’s true the SRV isn’t what manufacturers love to tout as an “all-new” design, but Cirrus is hoping its entry-level price and innovative features may just serve to introduce it to a whole new class of buyers.

For more information, contact Cirrus Design Corporation at (218) 727-2737 or www.cirrusdesign.com.