Enough trash already. This endless washboard-road turbulence promises to reintroduce me to the hot dog and greasy fries I just ate. Note to self: Next time, have an avocado salad.

After two hours, I’m still fighting the airplane. I thought I’d be much better than this, and that’s the core of the problem: You can’t fly on expectations. You can only fly the airplane.

The airplane isn’t the problem: It’s solid, tight, comfortable and doing what an airplane is supposed to do—fly. I can feel its lightness, of course: A Beech Bonanza weighs three times what most LSA do. That’s why, in the bumps, you’re more ping-pong ball than paddle.

But it’s me—that’s the problem. Put a perfectionist in a new cockpit on a choppy day, and you’ve got a low-grade crisis of self-confidence. I’m not flying horribly. I just expected to be better than this. What was I thinking?

Flying Dreams Revisited
I was thinking, “It’s time to rejoin the party.” I’ve always loved airplanes. Whenever I heard one overhead or saw one at a field, I had to stop and gaze. I felt a kinship for wings. It was a part of the mystery of me, like my father, a WWII pilot I only vaguely remembered but who always had a model airplane around the house.

Remember headlines like: “8-Year-Old Boy Solos, Becomes 747 Captain At 14!”? I was not one of those boys. Although I’ve flown all my life, I never got my pilot’s license.

One day in 1973, rounding a sand dune on the Oregon coast, a bright yellow hang glider landed right in front of me, like a dart dropped by Apollo. Desire ignited my soul. There was my future, flapping in the breeze.

I scraped up $400, bought a hang glider and never looked back. A couple years later, I took flight lessons in a C-152 and racked up 55 hours. 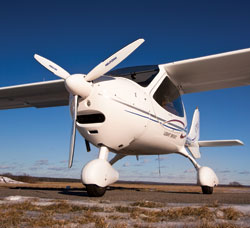 But there was a problem. I loved the in-the-air-with-wings part. But all that chart reading, radio chatter, flight planning and traffic dodging through busy Los Angeles skies? Not working. Not working at all for a hang-divin’ sky surfer. I never took the checkride.
Advertisement

In 1980, the bug bit again when hang gliders morphed into ultralights. I flew, then wrote about and photographed the new breed for publications. I had found my professional home at last.

In 1984, the burgeoning ultralight industry, devastated by bad press—such as a slanted “expose” on ABC’s 20/20—augured in. I continued doing freelance aviation writing and photography, but sold my ultralight and hang glider. Selling those freedom-flying machines was like amputating an arm.

Recently, in that human way we’re all heir to, I began to yearn for things left behind. At first, it manifested itself with old Twilight Zone and Have Gun—Will Travel episodes.

Then I realized what I missed most: piloting an airplane above the green hills of Earth. It was time to get back in the game.

First Stop: Checking The Ego
The challenge: I was rusty as the ancient Greek Antikythera mechanism, which had lain underwater for 2,000 years. The solution: I’d take flight instruction as a rank beginner.

Such an undertaking implies—especially for pilots like me who’ve flown in everything from supersonic fighters to hot-air balloons—a need to set aside their ego. When most of us hit our 50s and 60s, we know how to do certain things well.

I certainly knew how to keep an airplane straight and level; I just never got the ticket. So this sport pilot license thing should be a breeze—just like an ultralight, right?

Wrong. And this is a key lesson for all pilots, beginners and especially you experts out there: With LSA, we need to check the attitude at the cockpit door.

Transitioning to LSA means overcoming any subtle, preconceived bias you may have that these are simple, easy-to-fly aircraft. They’re not hard to fly. They do, however, live in a different energy and performance envelope, and deserve respect.

Pilots would better serve themselves by crafting this mind-set: Learning to fly an LSA is equivalent to adding a glider, floatplane or balloon rating.

Starting At The Top
Choosing the right bird from 80-plus ASTM-certified LSA was daunting. I love them all: Cub-alikes, ultralights, hang-glider trikes and all that sexy Euro plasti-carbon. Wow! I was a Wii addict in a Nintendo store.

I know and respect Flight Design’s founder and president Tom Peghiny, a true sport-aviation visionary, from my hang- gliding days (www.flightdesignusa.com). Peghiny’s a straight-up guy and a real industry leader (“Light-Sport Chronicles: Profiles In Vision” ). When I told him I hoped to earn my wings in a new-breed LSA, he offered me the use of a CTLS for training. I jumped at the chance.

The all-carbon-fiber CTLS rolled out last year. It’s a customer-request refinement of its popular forebear, the CTSW. It sports beefier gear, a longer fuselage for dampened pitch sensitivity and other enhancements.

Quite a performer, the CTLS is both fast (115-knot cruise) and slow (39-knot stall) and has long legs (1,000 nm range). There’s also the aesthetic factor: It’s a pretty airplane.

Rockin’ And A-Rollin’
Peghiny asked John Lampson, a local CFI who’s equally passionate about flying and music, to be my mentor. Lampson even has his own rock band, called Stealing Jupiter (www.stealingjupiter.com). I imagined us doing dual air guitar at 4,000 feet.

I was a touch nervous on the first day. Would I shape up? I was eager to learn, but that old perfectionist’s ego was in there pitching expectation curves at me too.

We met at Premier Flight Center (www.premierflightct.com), an FBO at Hartford-Brainard Airport (KHFD). That’s a real friendly hangout; next time you’re winging over New England, drop in and say hello.

The right instructor is crucial to the flight-training experience. Right off the bat, I knew Lampson and I were a good match. Good-hearted and gentle, he has the patience of a Mets coach enduring a 20-game losing streak—no Marine DI screamer, this guy. And his role as CTLS transition trainer for new owners made him ideal for my mission.

Out we walked to the CT. I did my first preflight, nicely aided by the ringed booklet of laminated cards that come with the airplane.

The bird is lovely: smooth, stylish and gracefully curved, yet cute as a button; well-finished inside and out; and that roomy (49-inch-wide) cabin with semi-reclined, lumbar-adjustable seats? Very comfy.

Controls are ergonomically well-placed. The panel’s dual Dynon EFIS glass panels and Garmin GPS provide all the in-flight data flyboys/girls could want, once you learn where to look for the readouts. Modern EFIS displays are packed tighter than a blueberry box and take time to learn to scan properly.

Reality Bites
My first challenge was the CT’s false horizon reference. The visibility is fantastic, but the button nose and curving glare panel I had found so cute have a downside: When you think you’re steering the bird straight, it’s pointing off dramatically to the right.

Taxiing to runup, I wobbled like a mongoose all over the yellow line.

“No sweat,” Lampson offered affably, “everybody has that problem. You’ll get used to it.”

After run-up and my first, awkward radio clearance with tower, I managed to line up on the runway. I tentatively fed in power. We surged forward—the CT accelerates quickly—and the airplane floated right off before I was expecting it.

I leveled close to the deck from old ultralight habits until I saw 60 knots or so, then let the stick ease back, and we climbed at a fighter-like angle for the blue and 1,000 fpm on the VSI—cool!

Fearless Leader called my attention to the yaw ball—it was way off center. This bird likes lots of rudder. After a routine series of stalls, slow flight, turns, landings and more—the classic First Flight Full Monty—I was just beginning to speak CTLS-ese. But I clearly needed Lampson as translator.

Then that greasy lunch and turbulence got me. After two hours, I asked if we could land. I rounded out and kind of bounced the CT onto the tarmac. Not terrible, not great.

After debrief, I reflected on the flight. The CTLS isn’t an all-forgiving Cessna 152. It’s a sophisticated airplane. It adverse yaws into turns and needs lead rudder, something I, as yet, have little skill for. It pulls a great power-off glide, so landing setup is different—I consistently came in too high.

The controls—in particular, a stiff throttle—seem firm for my tastes. I’d like a lighter feel, so I’ll have to adjust to that.

Otherwise, I love the airplane. It’s unique, feels strong and true, and I’m eager to know it better. Like my late father said about piloting and life: You have to fly the airplane. One thing is now clear: Solo seems like a long way off. A long way off indeed.