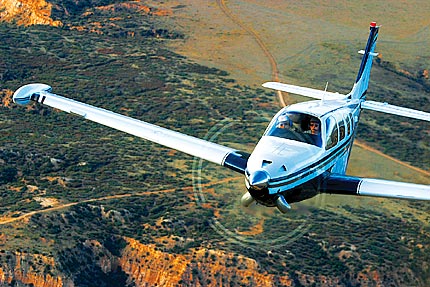 Hot-rodding is fundamental to the American soul, and it isn’t merely confined to car buffs. Pilots, too, have a need to go faster, farther and higher. It’s an unending quest for most of us, who want more out of our flying machines. And the best way to fulfill that need is by adding more power to an airplane that we already love to fly—which translates to more fun and more speed.

Joe Boyd at Tradewind Turbines caters to such fun- and speed-loving pilots. Shying away from being called a hot-rodder, Boyd offers an aftermarket power conversion for one of general-aviation’s long-standing airplanes—the Beechcraft Bonanza.

His shop at Amarillo, Texas, breathes a 30% speed increase into these classy airplanes, turning them into machines you can use every day.

A Good Foundation
But why choose the Bonanza for the power conversion? As most hot-rodders will tell you, the best place to start is with a good basic airframe, and the Bonanza’s long and reputable history for successfully morphing with the times, as well as its staying power and strength, makes it a good place to start.

Debuting in 1947, the original “Straight 35” Bonanza became the basis for a host of additional airplanes and variations. With 165 horsepower under the cowling, it was capable of carrying four adults at speeds of up to 180 mph—an unrivaled feat at the time. The company then produced over 10,000 of its V-tailed Bonanzas, which spanned 21 models during its 35-year production run. In the mid-1960s, the Debonair, a conventional tail version, was produced to compete with the C-182 and Piper Comanche. And the Travelair used the Bonanza’s fuselage as the basis for its creation, which then morphed to the ever-popular Baron light twin.

Then, in 1968, Beech created the model A36. Borne out of the E33 straight-tail Bonanza, it became an instant success. This modified version had its wings moved aft and its fuselage stretched. Capable of seating six adults without compromise, it was a stable, versatile workhorse. Beech has built almost 2,700 copies of the A36, making it a hot-rodder’s recipe for success.

That Much Better
But why make an already perfectly good piston airplane that much better? Aside from its fun aspects, the short answer is precisely because it’s a good airplane. There are a lot of Bonanzas flying, with parts that are easily available, and its maintenance issues are straightforward. With the Beech A36, the turbine-engine conversion doesn’t fix inherent problems. It simply makes a sound airframe an incredible performer. Couple that with the declining availability of gasoline and piston-engine reliability issues and the modification becomes even more attractive.

Climb performance is another strong point. A 300-hp Continental IO-550 A36 will finish its climb to altitude to 600 fpm, whereas the Turbines Bonanza will hold a 25-degree nose-high attitude while climbing at 2,500 fpm well above 10,000 feet. To approach this kind of performance with any other airplane will cost $2 million or more, not to mention the increased maintenance and insurance costs. So, pound for pound, dollar for dollar, the Turbines A36’s $400,000 conversion price makes it a very good deal for what it can do. 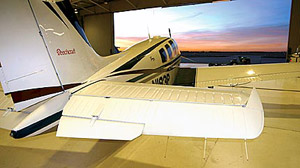 At 3,500 hours, the TBO for the Allison 25 450-hp engine is nearly double the standard piston engine. Most importantly, the Allison’s failure rate is one every 115 years. That makes the engine 100 times more reliable than a piston-aircraft engine.

Speed, safety, reliability, load capacity, comfort and maintenance—all good things to have in an airplane. The only remaining question is whether or not the Tradewind Bonanza’s speed and reliability make it a fun airplane to fly.

Putting It To The Test
Starting a turbine is a little different from revving up a piston-powered engine. There is no priming or any of the tasks you need to do to coax the cold engine to life. Get the igniters going, engage the starter and give it some fuel. As the engine goes up to speed, watch the temperatures and switch the generator on line at idle. Simple. Just make sure there’s plenty of juice in the battery.

Taxiing is different in this plane, as well. Slip the prop out of Beta and the airplane will run briskly down the taxiway. Instead of brakes, just slip it back into Beta pitch to slow down. Forget about checking the magnetos; just line up on the runway and pour on the coals. Be careful about throwing in a bootful of rudder to counter the torque. It won’t need much. And be prepared to sit back in your seat because the acceleration is impressive.

During takeoff, there are two things you don’t want to do—over-torque the engine and over-speed the gear. A turbine operates using a percentage of rpm and torque, which is essentially the twist value as felt by the prop-shaft. At lower altitudes, think of torque as the red-line, not rpm. If you exceed it, you risk damaging the engine. And, yes, there’s enough power to accelerate quickly through your gear operating limits. Normally, gear speed for general-aviation airplanes only is a problem during the descent, but in the Turbines A36, if you don’t watch your pitch attitude, it comes along very quickly.

Cruise speed in the Turbines A36 also is impressive. At 25 degrees nose-high, the airplane will peg the VSI all the way to cruise altitude. For most airplanes, this is, essentially, an aerobatic maneuver. Plus, the Turbines A36’s yellow line really is the limitation for the airplane, not the lack of engine power. And the 65 db of noise level at cruise, according to Boyd, is much quieter than a piston.

For descents, you can go down as fast as your passengers will let you, just flatten the prop pitch. Mixing it up with the big boys at the bigger airports also is easier. Increase your speed, slow down or do whatever you need to do—fast and smooth are the watchwords.

But all this performance doesn’t come for free. After you put the Allison engine on the airplane, you have to feed it on the order of 28 gallons per hour. The 20-gallon tip tanks make up for some of its prodigious appetite, but with IFR reserves, it doesn’t quite have the range of a normally powered airplane. The simple truth is four hours is the upper limit for most passengers anyway. In a Turbines Bonanza, you’ll be able to go about 25% farther than in a piston-powered airplane in the same time period.

So, let’s see. One hundred times safer than a piston, the same comforts as a luxury airplane and easier flying and maintenance…. This Tradewind Turbines Bonanza can certainly show us that the sky is the limit.