Their legacy is one of courage in the face of a variety of adversaries—fierce anti-aircraft artillery fire, swarms of enemy fighters, some of the worst weather in Europe and constant derision and discrimination from many of their own comrades in arms during World War II.

The Tuskegee Airmen consisted of approximately 1,000 pilots trained at Tuskegee Army Air Field in Tuskegee, Ala., between 1941 and 1946, and they were all black. At the time, the myth was that black men couldn’t be trained as pilots. Some military officials and the government itself apparently felt black men weren’t brave enough to fight or smart enough to fly. Many white officers did everything possible to block any attempt by blacks to fight for their country in other than foot-soldier roles.

As depicted in the 1995 HBO movie The Tuskegee Airmen, training black pilots wasn’t a popular subject in the early 1940s, despite strong support from a Missouri senator named Harry S. Truman and his more enlightened colleagues. First Lady Eleanor Roosevelt also helped publicize the problem by insisting on flying with a black Tuskegee instructor in 1940.

Many of the pilots who prevailed and made it through the training course, however, were eventually assigned to fly Curtiss P-40 Warhawks, Bell P-38 Aircobras, Republic P-47 Thunderbolts and North American P-51 Mustangs initially on ground-pounding duties against Rommel in North Africa and later in bomber-escort missions over southern Europe.

In some 200 escort assignments over Europe, the 332nd Fighter Group, comprised exclusively of African-American pilots, never lost a bomber to enemy fighters, the only fighter group to boast that record. Sadly, such a distinction was not without price. Some 66 Tuskegee Airmen lost their lives in aerial combat, and another 32 were shot down and wound up in POW camps.

The Red-Tailed Angels, as they came to be known, flew fighters with crimson tails and were so tenacious in their defense of the bombers, some German units were seen to shy away when they recognized the airplanes. Word spread quickly of the 332nd’s record, and some bomber groups actually requested escort by the all-black fighter squadrons.

Based primarily in Anzio and Ramitelli, Italy, the Tuskegee Airmen flew a total of almost 1,600 missions during the war, accounted for some 260 enemy aircraft destroyed (including three ME-262 jet fighters), earned over 150 Distinguished Flying Crosses and other medals, plus two Presidential Unit Citations. Members of the 332nd also blew up a German destroyer in the harbor at Trieste, Italy, with nothing more than 50-caliber machine gunfire. 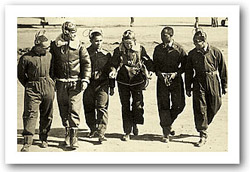 Sixty years later, former airline captain Steve Cowell of Denver owns what is probably the last surviving Tuskegee airplane. “I just wanted to own a warbird,” says Cowell, “and I knew there was no way I could afford a P-51 or Corsair.” Cowell was aware that a reasonable flying example of a frontline fighter goes for $1 million or more these days.
Advertisement

Cowell had done his homework and knew that T-6 Texans were among the most prolific of WWII warbirds. “I’d always liked T-6s, and when I found this one at an estate sale in Blue Earth, Minn., I flew in a T-6 expert mechanic for an exhaustive pre-buy. When the mechanic finished the inspection, he gave it a reasonably positive thumbs up and suggested he’d buy the airplane if I didn’t. After that, I knew I had to have the airplane,” Cowell explains.

The T-6 that Cowell discovered in a Minnesota hangar had first entered civilian registry in 1958 and traveled all over the U.S. as various owners purchased, flew and refurbished it. The Texan had served as a toy for some and as a working airplane for others. For a time, it had even flown as a cloud seeder. Most recently, it had served a non-pilot banker/warbird enthusiast for 18 years.

In August 1997, after brief negotiations with the family of the owner, Cowell became the 11th civilian owner of the classic warbird, having parted with $115,000 for the privilege. “When I bought the airplane, I thought I’d simply fly it for a few years, have some fun, then sell it for a profit and buy a house,” Cowell explains. “It didn’t work out that way.”

Captain Cowell’s attempt to restore the T-6 was frustrated by the major expense, time and effort associated with such a project. Cowell first learned of the Texan’s unusual heritage four months after the purchase, one reason he calls himself an accidental historian.

Despite the T6’s travels and its many owners, the original dataplate had somehow managed to remain in place on the rollover structure. Cowell had copied the serial number and all other relevant information and sent off a request for information to the U.S. Air Force Historical Research Agency at Maxwell AFB, in Alabama, prior to buying the T-6. He finally received a reply long after he’d completed the purchase.

The Air Force search revealed that Cowell owned a T-6C that had been upgraded to a T-6G in 1951 by modifications to the fuel, electrical and hydraulic systems. More importantly, it disclosed that Cowell’s plane was the last surviving AT-6 originally assigned to Tuskegee.

Cowell’s research suggests there may be a Stearman or two and perhaps a Mustang still flying that passed through the Tuskegee base for short periods, what Cowell refers to as a “coffee break,” but his airplane is the only remaining warbird that has been confirmed as originally assigned to Tuskegee AAF and to have served most of the war there.

With that knowledge, Cow-ell’s mission changed from one of simply maintaining a classic warbird for fun flying to restoring and displaying a piece of aviation history. In examining Air Force records, Cowell learned his airplane had been delivered from the North American plant to Tuskegee in March 1943 and had served as an aerial gunnery and air-combat maneuvering flight trainer until June 1946. After that, it served time at various USAF installations in Missouri, Oklahoma, Kansas, Tennessee, New Hampshire and Georgia before being surplused to storage at Davis-Monthan AFB in Tucson, Ariz., in 1956.

In light of its historic significance, Cowell renamed the airplane Double Vee (for victory in Europe and victory over discrimination) and resolved to restore the airplane to its original configuration and appearance, working on his own and with help from others. He contacted as many members of the original Tuskegee Airmen as he could find, researched North American’s records and coordinated every detail of the airplane’s restoration with the Smithsonian National Air and Space Museum. “I’d sometimes spend days or even weeks trying to determine the exact color of a particular knob or control,” Cowell comments. “The idea was to completely restore the airplane to its exact appearance in Tuskegee.”

The renovation proved a tougher and more expensive job than Cowell could have possibly imagined. “I was landing at Longmont, Colo., in July 1998 when a steering cable on the tailwheel let go and I lost all directional control. The airplane charged off the runway and hit a taxiway sign,” Cowell recalls. “The Texan wound up on its nose with a collapsed gear and substantial damage. Unfortunately, the insurance company wanted to total the airplane rather than repair it.”

Cowell investigated every option for repairing the classic warbird and completing the reconstruction, and he finally decided the T-6 deserved nothing less than a first-class, professional restoration. Despite the cost, Cowell had the airplane disassembled and trucked to Nelson Ezell’s shop in Breckenridge, Texas. “Nelson has perhaps one of the best reputations in the industry, and he helped me every way he could. I took a considerable amount of my savings, borrowed against several other reserves and even sold my watch to pay for the work,” Cowell remembers.

Two years and more money than he cares to remember later, Cowell’s immaculately restored AT-6 was finished. “I’m not sure you can say a project such as this is ever truly finished,” Cowell explains, “but Ezell’s meticulous renovation was done and the airplane was back in the air by 2000.”

Since the Tuskegee T-6’s return to service, Cowell has campaigned it to air shows across the U.S., doing his best to keep alive the memory of the African-American pilots who paid the ultimate price during WWII. In recognition of Nelson Ezell’s painstaking restoration and Cowell’s dedication, the National Air and Space Museum and the National Aviation Hall of Fame named Cowell and his T-6 the People’s Choice Award winner for 2001. The airplane has been featured on local television stations all over the U.S. and received coverage by the Discovery Wings Channel following its appearance at the Dayton 2003 Wright Brothers Commemorative Air Show.

The “accidental historian,” Steve Cowell, didn’t set out to become a passionate Tuskegee missionary, but the more he learned about the black airmen from Alabama, the more he was convinced their story needed to be heard. “I believe you can achieve an uncompromised victory, no matter what the battle, just as the Tuskegee Airmen did, as long as you keep your heart in your dreams,” says Cowell. “There are some things that simply should never be forgotten. Most of the Tuskegee Airmen are gone now, but Double Vee and I plan to keep their story alive as long as we can.”