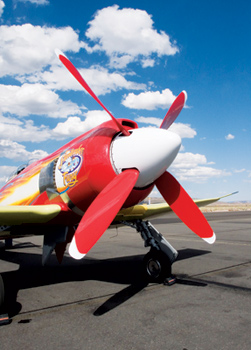 It was just after 6 p.m. when I turned final for runway 4R at Honolulu International Airport. My 2,160 nm crossing from Santa Barbara, Calif., into the wind had required 13 hours and 15 minutes, yielding an average speed of 163 knots. I’d maintained 8,000 feet in the new Mooney Ovation for most of the trip, climbing up to 10,000 feet for the last 500 nm into Hawaii to take max advantage of the standard trade winds.

As I touched down and rolled off the runway toward Air Service Honolulu, I couldn’t help shaking my head in amazement at the reliability of general aviation engines. I’d just made my 179th ferry flight and 17th partial Pacific crossing, and the realities of the trip were truly staggering.

I had run the Ovation’s Continental IO-550 powerplant for 13.25 continuous hours at 2,500 rpm. That’s roughly two million revolutions with nary a miss.

I was headed for Australia, still 4,500 nm away. After the usual butt-recovery day off, I knew I’d need probably another 12 hours on the next leg to Majuro, Marshall Islands. Then, I’d log perhaps eight hours more to fly to Guadalcanal in the Solomon Islands and a final eight hours on into Brisbane. Do the math, and that works out to another four million revolutions for a total of six million.

That, folks, is a lot of revolutions.

The beneficiary of all those revolutions is the propeller. In fact, the often-ignored and neglected propeller is what keeps most general aviation airplanes in the sky. It doesn’t matter how much horsepower you have out on the nose, it’s all totally useless without a prop to translate power into thrust.

The simplest props are fixed pitch, and if you fly a basic general aviation airplane these days, chances are you fly behind one. A fixed-blade prop is less costly, less complex and sometimes lighter than a constant-speed prop, and that translates directly into lower costs for owners and reduced hourly rates for renters.

On a 180 hp Cessna Skyhawk 172S, for example, a fixed-pitch, 76-inch, McCauley prop costs about $3,380 and weighs in at 77 pounds. In contrast, a constant-speed McCauley for a 230 hp Cessna Skylane costs $7,505 ($10,601 for the three-blade version) and weighs about the same. In other words, if you’re renting a Skylane, you can expect to pay a higher rental rate just to help offset the cost of the prop.

By definition, a fixed-pitch prop can only be optimized for one aerodynamic condition because its pitch is, well, fixed. Accordingly, most are pitched for a compromise angle between the performance demands of high power and high angle of attack (climb) and the requirements of reduced power and lower angles of attack (cruise).

With a fixed-pitch prop, the primary power-management tool is the throttle. Mixture comes into play as well, but to a far lesser degree than the throttle. That means you’ll be tempted to analogize rpm directly to horsepower, which would be a false analogy. As the airplane climbs into thinner air at higher altitude, the prop blades meet less air resistance and full throttle continues to develop near-redline rpm, though both horsepower and thrust decrease. Eventually, engine power is reduced so severely that rpm begins to fall.

For better or worse, you’ll probably be at full throttle all the time (assuming you cruise above 8,000 feet MSL) until you initiate descent for landing. At that point, you’ll want to decrease power to avoid exceeding the max cruise setting as the aircraft loses height.

The majority of general aviation airplanes turn their engines at 2,800 rpm or less, mostly “or less,” especially in the current atmosphere of good neighbor airports. (Remember, that’s “rpm,” not “rpms.” Obviously, “revolutions per minutes” is meaningless.)

Noise pollution is a real problem at airports all over the world, not just at the major airports that host big jets. In fact, some aircraft and engine manufacturers have taken to derating large engines to use lower redline rpm, specifically to reduce noise pollution.

Another factor governing rpm is prop efficiency. Your car can transmit its power directly to the asphalt, so the only limit on rpm is purely mechanical. In contrast, propellers lose efficiency beyond a certain point. Turn a 78-inch-diameter prop at 2,800 rpm, and you’re generating tip speeds of roughly 565 knots at sea level.

There are about a dozen variables governing the effectiveness of a propeller, but one of the most operationally critical is tip speed. Generally, the closer the prop tips come to the speed of sound, the less efficient the prop. Mach 1 is equal to about 650 knots at sea level, so a pure tip speed of 565 knots is equal to Mach 0.87. Prop efficiency begins to decrease dramatically when tip velocity approaches or exceeds Mach 0.85.

That’s because portions of the prop will be operating beyond Mach 1, generating a shock wave, separating the airflow and severely dissipating propeller energy. In plain language, no matter how fast you turn the engine, the prop tips can’t exceed a certain speed.

This means most direct-drive general aviation engines are limited to about 2,700 rpm and prop diameters rarely exceed 77 inches. A few engines have been produced that turn at up to 5,500 rpm and utilize gearing to reduce prop rpm to 2,700 revolutions or less. With a fixed-pitch prop out front, there’s only one way to achieve max cruise, and that’s with max rpm, so you won’t have a lot of choice on throttle setting.

Turn the propeller slightly slower, and you’ll reduce tip speed, lower cockpit noise level and improve prop efficiency, to a point. You may also reduce vibration level, and on some airplanes, that alone may be justification for turning the prop slower.

As you reduce rpm below the sweet spot, the airplane will assume a progressively higher angle of attack, presenting more drag, but at a better trade of fuel for speed, down to about 45% power. Below 45%, most airplanes are so far behind the power curve that drag increases outweigh reduced fuel burn, and nautical mpg and absolute range begin to decrease.

Generally, the closer the prop tips come to the speed of sound, the less efficient the prop.

In other words, if you need to fly farther on the same fuel, use the lower power setting. (Duh!) Remember, however, that you’re sacrificing 22% of your speed in exchange for only 14% better fuel burn, so you obviously need to value your time less than your money.

Don’t automatically assume the rpm you’re seeing is the rpm you’re turning, by the way. Just like most people, standard analog aircraft tachometers tend to slow down as they age, so an old tach that hasn’t been overhauled in 20 years may be reading as much as 100 to 200 rpm lower than the engine’s actual revs.

Twenty years ago, a good friend with a Cherokee Six 300 complained that he couldn’t get his engine to deliver full power on takeoff, but he saw better-than-book cruise speed, if at a higher fuel burn. That sounded like a familiar problem. I put my friend in touch with a good mechanic who strobed the prop and discovered it was indicating about 125 rpm low. (Some pilots sidestep the problem altogether by purchasing a battery-powered electronic strobe and mounting it on top of the panel to monitor prop rpm.) 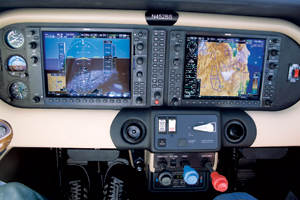 Similarly, don’t assume you can use any rpm you wish for cruise. Some airplanes (the Piper Arrows, most older Mooneys, the Beech Sierras, the Commander 112s, the Cessna Cardinal RGs) have restricted areas of sympathetic vibration— resonance zones marked on the tach where operation isn’t allowed. These airplanes are restricted between 2,200 and 2,350 rpm.

A constant-speed mechanism in an airplane serves a similar function to the transmission in a car, allowing the propeller to generate additional thrust at both high and low angles of attack. This helps improve both climb and cruise performance.

A constant-speed prop changes the rpm equation, because the governor allows the prop to maintain a constant rpm under all normal power settings. This provides the pilot with a choice of power settings between high rpm/low manifold pressure (MP) and low MP/high rpm. (Turbocharged airplanes again complicate the issue slightly, though turbonormalized models flying in the flight levels often can safely use oversquare settings similar to normally aspirated airplanes operating at low altitude.)

Flying oversquare is more than a little heretical to the old school of aviators. Traditional wisdom had it that you should always maintain MP in inches equal to or below rpm in hundreds. In the ’30s and ’40s, the universal advice was that you never exceed “square” settings (e.g., 24 inches and 2,400 rpm) for fear of detonation.

There were several reasons for adopting this technique. At the time, there were a number of aviation fuels available with octane ratings from 71 to 145, depending upon engine power, number of cylinders, compression ratio, etc. Pilots were often being trained relatively quickly in a succession of progressively more powerful aircraft with little transition time, and it was safer, faster and easier to teach only one, ultra-conservative operating procedure for all aircraft.

Maintaining rpm equal to or “ahead of” MP was a supposedly safe procedure to teach as it would never result in detonation. In those days, many aircraft engines were radials, highly susceptible to the destructive forces of detonation. (To save money, one technique some pilots were taught was to refuel the aircraft with high-octane fuel in one tank for takeoff, climb and high-power maneuvering, then top another with cheaper, lower-octane petrol for low-power cruise.) Trouble was, traditional wisdom had it wrong. A few aircraft and engine manufacturers still cling to such antediluvian beliefs, but some do allow oversquare settings to reduce cockpit and flyover noise level.

The POH for the new Cessna 206H Stationair, for example, suggests that it’s okay to operate at 25 inches and 2,100 rpm at a 4,000-foot density altitude. That works out to 64% power and generates 129 knots on 14.5 gph. A setting of 21.5 inches and 2,500 rpm generates the identical speed, power and fuel burn, but with a considerably higher decibel count.

Pretty obviously, the oversquare argument becomes moot at higher altitude with a normally aspirated airplane, as power falls off at about one inch of MP per thousand feet. At an 8,000-foot density altitude in the Stationair, full throttle only produces 22 inches MP, so almost by definition, it’s tough to fly oversquare.

Lower rpm cruise has a number of benefits in addition to the obvious one of reduced noise level. Running a higher MP/lower rpm helps marry piston rings to the cylinder walls, resulting in better cylinder compression. It also reduces frictional losses and improves prop efficiency at lower rotational velocities. Additionally, it allows the valves to run cooler and normally results in lower EGTs and TITs.

So the next time you start the engine and taxi out in your Arrow, Mooney or Bonanza, remember that you have a greater variety of power settings than you may have been taught. Flying is a cooperative effort on the part of hundreds of mechanical components, but that rotating airfoil out on the nose is one of the most important.