I hate roller coasters. Little tykes who are barely out of their diapers scamper away from the Superman Ride giggling and laughing. I, on the other hand, stumble away with nausea, posttraumatic stress and a desire to sue the park for mayhem, reckless endangerment and domestic terrorism. 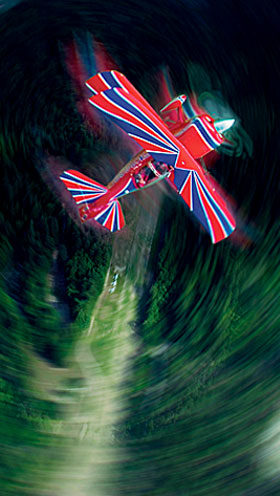 So what am I, a nonaerobatic pilot, doing here at 7,000 feet—with my eyes closed, mind you—falling inverted out of a tailslide in an airplane I’ve never flown before?

Answer: taking one for the team—that is, you, dear reader. Why? I want you to learn how to save your life in any out-of-control flight situation you may wind up in.

I’ve been tasked with flying myself out of this incipient disaster. Did I mention that my eyes are closed?

“Okay,” comes Bill Finagin’s voice over the headset, “open your eyes!” My eyes pop wide. I’m inside a tornado. Everything’s a spinning blur. Where’s the ground? Where’s my stomach?

An hour earlier, Bill Finagin, a master Pitts instructor pilot and a man with a mission (creating supersafe pilots), had offered to teach me this simple, bulletproof flight-recovery method that supposedly works for any flight attitude.

“Any?” I asked, beginning to tap my fingernails on the table.

“Any. It doesn’t matter if you’re in a spin or just fell out of a hammerhead stall—maybe you don’t even know what happened, but you’ve lost control of the airplane.”

“Don’t tell me…you’re going to demonstrate this with me in the front seat of the Pitts, right?”

“Right.” Is he smirking? “It’s like drown-proofing a swimmer. Every pilot should know this.”

Note to self: Start finding ways to weasel out of this flight without making cluck-cluck or weasel sounds.

“I usually ask someone,” says Finagin, “‘What’s your criteria for determining when an airplane’s out of control?’”

I sit there with a blank look on my face, weighing my exit strategies.

“When do you decide?” he continues. “Unfortunately, many pilots haven’t thought about that. So I’m going to define it for you.”

Out of control, I think to myself, is probably when the screaming starts.

“The airplane is out of control when it no longer performs what you expect the next event to be. If you’re flying straight and level and it goes to the left, you should assume it’s out of control.” I routinely have that experience on snowboards.

“Anytime the plane departs from what it should be doing,” he continues, “it’s out of control. So that’s the first step in this recovery method: learning to recognize out-of-control situations.”

“That makes sense,” I say. In fact, I’m beginning to lose bladder control this very second.

He shakes his head and grins. “You’d be amazed. Most people will hesitate. There’s a built-in mechanism that prevents us from admitting we’ve lost it. That kills a lot of pilots.”

In his many years of instruction (10,000 hours in aerobatics alone), Finagin’s seen it all. And his favorite tale is of a student who took 22 seconds to admit he’d lost command of the airplane. In flight, that’s a lifetime—literally.

“People freeze; their brains lock up; their egos won’t let them recognize they’re in trouble,” he says. I wonder, is this before or after the screaming part?

“The first thing I ask people is what spin experience they have. The answers are all over the map, from none to a lot. Then I ask them basic questions.” He leans forward on the table and looks me square in the eye. I feel the urge to cluck. “For instance, when we enter a spin today, where do you expect the ball to be on the attitude indicator?”

Hmmm. Spins? I fumble out some lame answer about all the way left or right depending on the spin direction, but confess that I’m not sure.

“Instead of telling you, we’ll wait until the flight. But you’ll be surprised, I can guarantee you that,” he responds. The inevitability of my imminent upside-down/inside-out spinning grows more tangible by the sentence. Surely there’s a family emergency that needs tending to…where’s that dang cell phone?

“Next question: If you’re in a multiple-turn spin, what’s the airspeed indicator going to show you? In other words, after three turns, or five, or after 10? Will your airspeed show faster, slower or the same.”

“Uh…uh…” Ten spins?! After 10 turns I’ll be praying for a gurney ride to the ICU. “Hell, I don’t know…faster? Hey, aren’t more than three spins unrecoverable in most airplanes?”

He smiles. “That’s what I call a ‘mythstake.’ Today, because spins aren’t required for a pilot’s license, many instructors have never spun an airplane! You can get your ticket simply by verbally demonstrating knowledge of them.”

Finagin goes on to tell me about a former student who had a panic attack during spin training. He had asked the pilot-in-training, “What’s the problem?” No answer. “He was blitzed, a complete vegetable in the cockpit. I couldn’t even get him to talk to me on the intercom. After we landed, he told me his private ticket instructor taught him that after three turns in a spin, the airplane would start coming apart! So he was truly fearing for his life.”

He gives me a sobering look. “This happens all too often. His fear was reinforced by the gospel of his instructor. That’s terrible. Spin training is important so that people will understand what’s happening in flight. These misconceptions perpetuate through generations of pilots, then the myths develop.”

I’m caught in a similar dilemma myself: I’ve been “mythstaken” for a flyboy who’s willing to endure spins and other traumas.

“For your recovery training today,” he prattles on, “we’ll do a few spins, just to familiarize you with the tension of the maneuver.” Tension. There’s a concept.

“I’ll have you close your eyes, then I’ll roll inverted or put the airplane into a hammerhead or a spin, something completely unfamiliar to you. The main thing to remember is this: It doesn’t matter where the airplane is. The recovery technique will always be identical.”

Then he tells me the four vital steps I must remember for a perfect recovery every time. “Say them over and over, like a mantra. Once it’s automatic, you’ll have a confidence you never had before, anytime you’re flying.” He gets up from the table. There’s no way out. “One more thing—when I tell you to open your eyes, I want you to call out each step so I can hear you.”

“You mean out loud?”

Wonderful. Roller-coaster flying is bad enough. Now I also get to experience the classic actor’s nightmare—naked on stage before a full audience, and I don’t know my lines.

I open my eyes. Everything’s a spinning blur. Where’s the ground? Where’s my stomach? Oh. My. God. Self-preservation hormones flood my endocrinal thingies.

“Throttle!” I bark, yanking the throttle full off. Hey, I remembered! The world rotates, my stomach counterrotates, my head tries to leave my body.

“Neutral!” I center the stick-and-rudder pedals. The airplane hangs weightless, does a sickening flop over onto its back, then points straight at the ground.

“Four G’s!” I pull back hard and smooth on the stick, watching the G meter. I have to keep the pullout forces from exceeding four G’s. Cheek and chin flesh head for my lap, and I’m only pulling two G’s.

“Harder!” barks Finagin. “Pull harder!” I pull. Two and a half G’s. Crikey, I already feel like I weigh more than Michael Moore on Jupiter.

The airplane rounds out smoothly to straight-and-level flight.

Am I outta my mind? Don’t I remember what happened to Oliver Twist when he asked for “more”?

But it really was fun. We did a 10-spin maneuver. Wow! Then two more recoveries, once from a spin…I think. I have no idea whatsoever what attitude he put the airplane into for the third recovery. But each one was nominal. Translation: The airplane didn’t self-destruct, I didn’t shriek like a Tim Burton character, and normal flight was resumed readily.

Finally he had me pull a loop, stall at the top, call out when I thought I was out of control, then recover using “The Method.” Roll over, Brando. I’m now a contendah.

“You can recover from any situation,” says Bill, back on the ground for the debrief, “in about 900 feet, if you follow the four steps without deviation or hesitation.”

Okay class, you get recess as soon as you repeat the Fearless Finagin Recovery Mantra after me:

1. Slam the power off as quickly and forcefully as you can.

2. Quickly force the controls to neutral. If a stick, center it. If a yoke, center it and hold it where it would be for straight-and-level flight. Rudder pedals should be neutral, too.

3. Now for the most difficult thing of all: Wait! Do absolutely nothing. Keep power off and controls neutral until you see 100 mph on the airspeed. Why 100? “It’s an easy number to remember,” says Finagin. “And it ensures a margin of flyability well above stall speed. If I told you 85, you might suddenly jerk back on the yoke and high-speed-stall it. Not good.”

4. And the easiest step of all: Simply pull out of the dive that you find yourself in. Just don’t exceed four G’s on the G meter. Once you’re straight and level, add power.

The nose will always be sharply down before pullout, but you’ve completed the hard part, which was to keep yourself from panicking and fighting the airplane. Instead, you just got out of its way and let it fly itself out of trouble.

“If you repeat that mantra to yourself a few dozen times every time you fly, you’ll be ready,” Finagin promises. “What’s amazing is how predictably the airplane recovers—every time.

“I wanted you to get the word out,” Finagin concludes, “because I believe learning this recovery technique should be mandatory for every pilot’s license.”

I nod, I grin, I trash the barf bag I filled just after landing. I’m woozy, but I’m a believer.

One last thing: What does the airspeed indicator read in a spin? Zero knots. In a spin, the wind relative to the airplane is corkscrewing up from below your feet. Airspeed pitot tubes are only set up to read straight-ahead velocity.

Allllrighty then! Bring on them sissy roller coasters!