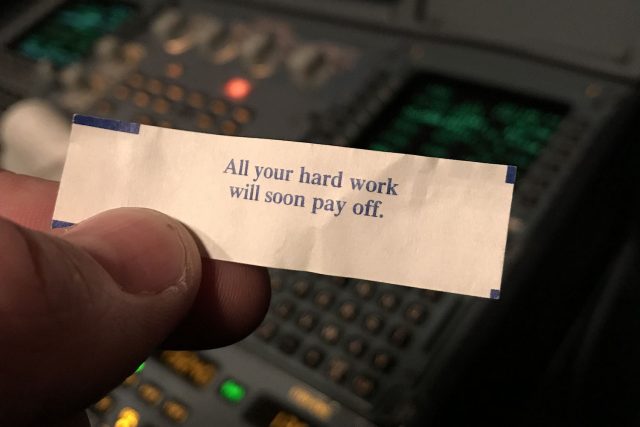 At the Barnstormer’s Grill in Williamson, Georgia, I sat in a booth next to myself at age 20. Okay, so he was redheaded and thin, but the parts that really mattered were all but identical. Similar socioeconomic upbringing, same struggle to continue higher education, same desire to fly airplanes for a living.

And friends, this young man could fly the stuffing out of an airplane.

Our paths crossed by way of mutual friend Kelly Leggette. Kelly, my friend, mentor and the benefactor who wrote a blank check noted “pay me back when you can” so I could finish the ratings to become a professional pilot back when I often searched my Toyota’s cupholder for gas money. Kelly owns two of the Zlin 526s that were part of the airshow team I grew up helping with, and every once in a while, we get together for a day of flying. Kelly’s a retired Air Force pilot who’ll leap at any chance for some formation work in the Zlins. For the better part of two decades, he’s kept me on his insurance for just this reason.

“Hope you don’t mind that I invited Nathan to come along today,” Kelly said.

I’d have been disappointed had he not.

As we had prepped for our $100 hamburger sortie, I strapped into the two-seat Zlin for a quick hop around the patch to polish a little on my tarnished tailwheel skills. This is the airplane my airshow team’s leader, Chris Smisson, had opened numerous airshows with, a red, white and blue airplane trailing matching colored smoke, flying to patriotic tunes, and taxiing in under a ruffling American flag; a somewhat conflicted performance given the airplane began life on the other side of the Iron Curtain.

The staccato snarl of its inverted-inline six-cylinder mill starting up puts a little tear in my eye every time I release the starter button. If anyone asks, I’ll swear up and down it’s the smoke, not the nostalgia. Once the engine temperatures came up, I pushed the canopy closed, drove the throttle forward, and clawed into the air for a couple circuits to make myself legal. Sometimes years fill the gaps between our dances together, but she’s always a familiar partner as soon as the music starts playing. With three patterns and about five landings under my belt, I joined Kelly and Nathan in the workshop where Kelly briefed up our flight. I’d be leading the formation, and he ran through all the procedures and techniques that once were second nature. We hashed out how the Atlanta Class B airspace had changed since I used to romp around beneath it, figured out our route of flight, brushed up on emergency procedures, frequencies and our plan for the traffic pattern once we got to Williamson.

“Let Nathan fly a little,” Kelly said. “Just point to the back of his head so I know I’m on his wing, and I’ll fan out a few feet.”

We fired up, taxied out, took off with a few seconds’ in-trail spacing, and formed up over the tree farm that’d been the setting for so many shenanigans back when we had an aerobatic box here. Nathan, in the front pit, armed with an iPad, called out a heading for me. I pointed our nose in the general direction, and he kept feeding me with corrections. “Hey, you’ve got a stick up there. You know where you’re going. Hold this altitude (the front altimeter is in meters) and take us there. You’ve got the controls,” I said with a small wiggle on the stick.

He locked onto the heading, held the altitude and beelined for our first checkpoint. With my copper-headed autopilot on the task, I put my feet on the floor, looked a few yards across to Kelly, and dramatically pointed at the back of Nathan’s head. Then I tucked both hands behind my head, and gazed around for traffic, slowly baking in a Plexiglas greenhouse beneath the hot August sun and making a big show of looking like I wasn’t doing a thing.

Then it dawned on me. I was exactly where some of my mentors had been, watching me grow as an aviator 20 years prior. “You’re doing great,” I offered, remembering the effusing praises heaped on my developing skills that’d helped bolster confidence in the young me. The kind words given me in spite of knowing that, back then, I was way out of my league, breathing rich air while living on lean-of-peak finances.

My sentimental reverie was interrupted when Nathan announced, “Hey, there’s the airport.” I had him lay off to the right, setting us up for an overhead pattern, and I took the controls as I waved Kelly to tuck it in tight for the break. I pitched out to downwind, then repeated the words Smisson had whispered into the intercom for me all those years ago, two-thirds ground, one-third sky, keep the turn coming as I banked around to final. With several kilometers of speed to spare, I wheeled it on and rolled long up the hill with some added power, giving plenty of margin for Kelly, who was floating down final behind us. He was invisible in my blind spot but clear in his position since we’d briefed it up. One man’s runway incursion is another’s formation arrival.

As we walked to the grill, I turned and shook Nathan’s hand, another habit I learned at his age. A handshake and the words “you’ve got good hands” were the crowning compliment of my early days as a pilot, and being on the giving end of a similar exchange was an out-of-body experience.

Seated around the table, Kelly and I shared a few stories from our day jobs flying heavy metal, and I floated a couple ideas for Nathan as he’s on the brink of his private check ride with concerns of cash flow, continuing college and chasing the dream of flight. The bar is even higher for him than it’d been for me: New hires in my regional airline class had sported fresh commercial tickets with less than 300 hours’ experience; now he’s tasked with reaching ATP minimums to do the same job. The flight school where he pumps gas presently seems to be welcoming him with open arms and hopefully will fast-track him to CFI status so he can build some time. Not having instructed was one of my biggest challenges in transitioning to the multi-crew environment: I’d sung songs and talked to the airplanes I’d flown but had rarely had to communicate to keep anyone else in the plane on the same page, operationally. Having to spend a year or so instructing will be great in helping him avoid the stumbles I encountered.

As we dragged our fries through the ketchup while plotting and scheming, it dawned on me: This was as close to writing a letter to my younger self—that trite and clichéd creative writing prompt—that I’d ever encounter. Don’t get preachy, I reminded myself.

For the flight back, I swapped to the single-seat bird, a Zlin 526 AFS. Clipped wings, dual ailerons on each wing, and a few refinements make this bird even more of a hoot to fly. We’d wanted to work in some formation practice on the flight back, some pitch-outs and rejoins for me to continue with the refresher, but the single seat’s fuel capacity is measured in drips, not gallons. Halfway home, Kelly called for a fuel check. I slid out a few extra yards and glanced to the fuel gauges in the wing roots. There was a lot more black than red showing. “Lead is showing 50 liters,” he said. “Two has 30,” I replied. “Let’s head home for some go-juice.” The Czechs built magnificent flying machines, but they designed them so that defecting was mighty difficult. I had about 15 minutes remaining on top of the VFR reserve fuel requirements and home was just about that far away. We landed and fueled up. I’d have to fire up to taxi back to its stable anyhow, so I went around the patch right quick for one last dance, quick and dirty. A quick run west got me out from beneath Atlanta’s airspace restrictions, and I held the stick against the left aileron’s stop for a quick roll, my phone’s camera button held for a burst of selfies, reminders that this stuff is fun, for the next rough day at the office.

On my return, I misjudged the flare, flew the mains right into the grass and ricocheted for two more bounces before a properly timed burst of power set her down to stay. As Nathan walked over to help me push her under cover, he smiled a knowing smile, having watched the big show, and offered these few words. “Most of those three landings weren’t half bad.” I chuckled at the good-natured brotherly ribbing.

I mean every word of it.