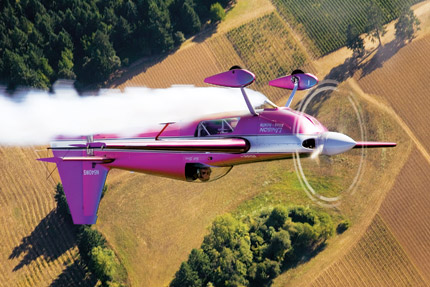 Explaining why I do what I do is surprisingly easy. The quick answer is that flying air shows is what I’m passionate about. I love it. But beyond that is a story of inspiration, physical endeavor, ongoing learning and camaraderie.

Like many pilots, my dream started when I was a kid. I grew up in Ann Arbor, Mich., home to a large number of aerobatic legends. The annual air show in Ann Arbor was one of the best, and it not only sparked my aviation enthusiasm, but also made the possibility of being an air show pilot seem like a real and sort-of-normal thing to do. Today, when I perform in my Edge 540 at big shows like EAA AirVenture in Oshkosh, Wis., and at small shows like Tucumcari, N.M., there’s no better reward than making eye contact with a kid in the crowd and sharing his or her excitement.

But the reality is that the life of an air show performer can be difficult. Flying is inherently dangerous; the risk increases tremendously when aerobatics are added into the equation. Wayne Handley, my air show mentor, taught me important concepts necessary to staying alive, like energy management and minimum pull-down altitudes. When maneuvers are flown close to the ground, the margin of error becomes practically zero. Complete confidence in your ability is absolutely necessary before doing something like pushing out of the bottom of an outside loop 50 feet above the ground. Risks, however, can be managed through constant training and an excellent maintenance program. There can never be too much spin-recovery training for any pilot. Once you’ve mastered all of the spin modes in an airplane, you’re, for the very first time, able to truly experience the freedom of flight. Once I tasted that feeling, there was no turning back.

I’ve also learned that the business isn’t all about the flying. You have to become part of the community and contribute whatever you can to benefit the group. Recently, the air show industry lost several pilots, prompting deep discussions about safety and how to keep pilots within a reasonable risk-reward envelope. When flying aerobatics, you need to know your “outs.” I have my numbers, and I’ve planned what I’ll do at each part of my sequence if I’m not at my minimum altitude or energy state. Also, the industry has been impeccable at setting rules and regulations to ensure the safety of spectators.

Flying an air show is an extremely physical endeavor. Nothing can prepare you to take a lot of G’s other than taking a lot of G’s. This is especially true for negative G’s. If you try to build tolerance too fast, you pay a price for it physically; the best case leaves you with strong flu-like symptoms as a reminder that your body isn’t built for this kind of punishment. (A local chiropractor, who also flies aerobatics, even offered me free X-rays and consultations just to have a chance to see the effects on my spine, and what might be in store for him as he progresses with his flying.) Once the G-conditioning is complete, it comes down to repetition, focusing on fundamentals and maybe working on new figures. “Practice, practice, practice” is a good mantra. “Practice makes perfect” is also a good mantra. “Fly every practice like it’s an air show and fly every air show like it’s a practice” is my favorite mantra. Almost every mantra I have has the word “practice” in it.

The travel schedule is also demanding. On average, I’m away from home five months per year, and traveling from show to show is a tough part of the business. Pilots are often flying through marginal weather in an airplane that has only an airspeed indicator, altimeter and a handheld GPS. Anyone who has ever ferried aerobatic airplanes around the country has tales of serious errors in judgment, most of which end in a statement like, “I sure won’t do that again.” I’ve learned that while you’re in the air, you have to put any mistakes behind you, move forward and fly the airplane. Once on the ground, you can analyze your mistakes to keep from repeating them.

In spite of these challenges (or actually, because of them), nothing captivates me like flying. It’s a beautiful art form, with a social network of people who have a real spark in their lives. There’s no place where I feel more at home than at an airport. And since we’re part of the traveling circus known as the air show biz, once we arrive at the destination, we’re among friends. The industry has only so many pilots, announcers, air bosses or show organizers, and each has decided that instead of doing something easier, safer or more lucrative, they want to be air show people, enjoying what they love. This makes for a cohesive group, and the people in the business are a big part of why I choose to be an air show professional.

It boils down to this: The act of controlling an airplane is something that I absolutely love. It was true when I was a kid with u-control model airplanes and it’s true today. The best “pilot thing” about aerobatics is that you need to be constantly learning and growing. There are always skills to develop, no matter what level you’re at. I thrive on challenge, and there’s no shortage of that in aerobatics. You can never fly the perfect flight and that, along with the desire to do well, is what keeps me coming back for more. Few feelings are as Zen as those experienced while flying aerobatics; by the time I’ve learned a maneuver and practiced it five- or six-hundred times, I’ve become one with the airplane. There are no more thoughts of what control inputs need to be added at what time; instead, the experience transforms into one entity—my airplane and me, taking a journey through the sky together. What many may think of as a wild and scary flight leaves me feeling strangely peaceful and content.

Bill Stein has logged thousands of hours of aerobatic and formation flight. Over the last decade, he has flown a Pitts Special, Globe Swift, Red Baron Stearman and a Zivko Edge 540. During the 2008 season, he’ll perform a solo act in his Edge (www.billsteinairshows.com) and as part of a four-ship formation team, the Collaborators (see Pilot Journal, Nov/Dec 2007).