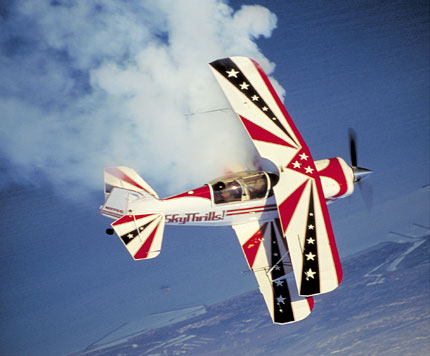 You may wonder about the benefits of aerobatics to general-aviation pilots, especially when most pilots’ main mission primarily consists of pleasure flights to try another $100 hamburger. After all, why bother with inverted loops when you can merely enjoy the view and have a pleasant flight? The answer is simple: Anyone who practices aerobatics becomes a better, safer pilot, and the skills you learn from a professional aerobatics instructor not only can be applied to your general-aviation flights, but also to saving your life one day.

Enhance Stick-And-Rudder Skills
Unlike most trainers, such as the Cessna Skyhawk or Piper Cherokee, aerobatic aircraft don’t fly themselves and must be flown with exact control inputs. In addition, they aren’t designed for stability. Their center of gravity (CG) is located, more or less, at the center of lift. That means that they don’t recover from a stall quite as easily as a typical GA airplane whose center of lift lies aft of the CG, which automatically pulls down the nose of a Skyhawk, for example, increasing the airflow over the wings and allowing it to recover from the stalled condition.

In addition, the wings of an aerobatic aircraft are symmetrical—a must for inverted flight. It’s quite different from the wings on GA aircraft, which consist of a dihedral angle that guides the plane from a slight bank to level flight, making it predisposed to flying straight and level.

In essence, an aerobatic airplane will do what you tell it to do—no more, no less. There’s no such thing as the hands-off, feet-off flight that you can do in a properly trimmed GA plane.

And that’s where the benefits of aerobatic training comes into play. It gives you a unique opportunity to fly airplanes that demand superior flying skills and lets you be in control, which can ultimately make you a better pilot.

During straight-and-level flight in an aerobatic aircraft, for example, the left rudder must be applied. During descents, as speed picks up, more left rudder is required, while right-rudder deflection is critical during climbs. Mike Blackstone, an aerobatics instructor at SkyThrills, explains, “If you relax your feet, the plane will fly crooked, and you’ll think, why does my back hurt?” This “sign,” according to Blackstone, will help you gauge the aircraft’s stability and to see if you’re banking too much or too little. It’s something that you can certainly apply to your GA machine, especially if you find yourself without a trim wheel.

In addition, aerobatic training allows you to become more aware of the inclinometer and the rudders. In GA aircraft, too many pilots fly with their feet resting on the floor, never employing the rudder. This results in the GA plane flying with a slight slip if it’s uncoordinated, which means that it’s aerodynamically inefficient because of the increased drag. With aerobatic training, the pilot becomes more aware of centering the little floating ball to prevent warped flight, as well as the rudders, to keep the airplane straight and level. So after a few hours of flying an aerobatic aircraft and constantly having to employ precise control application, you can bet your stick-and-rudder skills will be much better.

Increase Situational Awareness
All aerobatic maneuvers can be broken down into four categories: loops and rolls, stalls and turns, spins and hammerheads. Every other aerobatic trick is a combination of these exercises. Once you learn to quickly recognize and recover from these four basic scenarios, you can move on to more complex maneuvers, such as Lomcovaks, snap rolls and tail slides. But there’s more to these maneuvers than meets the eye.

Although there’s no question that they’re fun to perform, the skills you gain by learning these maneuvers will allow you to recognize what the airplane feels like and what the outside picture looks like in all kinds of different positions. Doing so not only allows you to apply them to a GA aircraft, but also to become a safer pilot. You’ll learn to recognize the attitude of the airplane by intentionally getting it into seemingly impossible maneuvers, and you’ll learn to recover promptly before a situation becomes dangerous. If you find yourself in a suddenly ugly situation while flying your GA aircraft, odds are your aerobatics training could make all the difference in the world.

Develop Your Instincts
Many pilots who fly with flight management systems rely too much on automation and are afraid to fly beyond the capabilities of what the avionics tell them to do. With aerobatics training, you’ll be taught to rely on yourself and your instincts, and learn to gauge your airplane’s characteristics. You’ll also discover that every airplane reacts the same way and will climb vertically if necessary. This knowledge is especially helpful when it comes to over-stressing the airframe.

Blackstone says, “After flying aerobatics for a while, you’ll know what different levels of G’s feel like. And 2 G’s in an aerobatic aircraft feels the same as 2 G’s in a Boeing 737 or a Cessna 172.” So if you know that your airplane can withstand only 2 G’s, you know how hard you can push it, and even though you shouldn’t practice hammerheads in a Cessna 172 or a Boeing 737, the skills you learn during aerobatics training will apply to your GA flights.

Take Precautions
Don’t teach yourself aerobatics, however. At a minimum, you should learn the basics from a professional aerobatics instructor. Not only will he or she keep you safe during this critical learning process, but you’ll have a chance to experience different attitudes and learn to recognize them and recover. After learning and practicing maneuvers with your instructor, be careful when you do fly and attempt to perfect these maneuvers yourself.

The bottom line is whatever aerobatics level and training you get, you’ll end up becoming a better, safer pilot. “I’ve flown for the airlines, the military and in stunt movies,” says Blackstone. “But I get the most satisfaction out of knowing that one day, the training I provide may save someone’s life.”