On November 9, 2015, my crew was on a ground turn in Colorado Springs, Colorado. Up until then, it was what I happily refer to as an “uneventful” day. The weather, for November, was mild. It was sunny, temperatures in the mid-50s and light winds out of the south.

I was in the cockpit doing my normal preflight activities: getting the ATIS, reviewing the flight plan, and programming the flight management computer. The fueler was fueling. The ramp personnel were unloading carry-on bags. The gate agent was helping an inbound passenger with a wheelchair. My flight attendant was tidying her cabin and preparing the galley for the short hop back to Denver. It was about as close to a textbook “turn” as I can remember.

My first officer had been doing his post-flight walk-around, and when I came out of the cockpit I saw him coming in at the jetway door. I could tell immediately that there was something wrong. He is a steady and sure-footed guy, but I could see that he was visibly shaken by something. His face wore a look of confusion. He said, quietly, “I think I just saw a plane crash.” 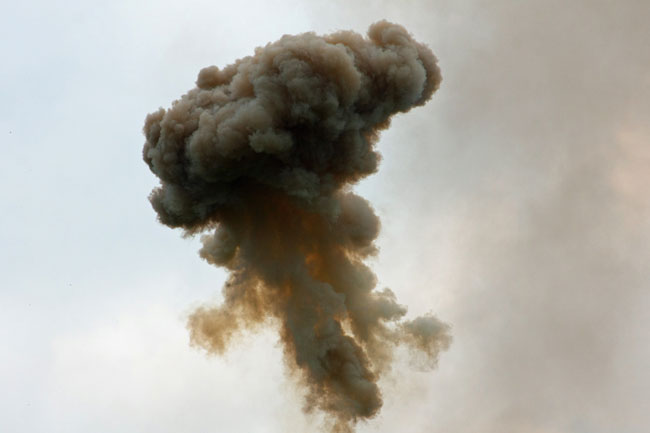 I followed him out onto the platform of the jetway and looked northwest in the direction he had indicated. There were, indeed, flames on the ground in the distance and an already-tall plume of dark black smoke rising above the site. I shivered at the thought but was unsure of what I was seeing. Frequently, airport fire departments practice their trade with “mock” fires. These result in similar plumes of black smoke. It happens quite often, and I have seen almost identical plumes at O’Hare when crews are training. I was fairly sure that’s what we were seeing. The difference here, of course, was the FO’s statement. He had seen something more definitive than a plume of smoke. He had seen a small airplane climb steeply and then descend behind a row of trees on the north edge of the field.

Like me, he had made optimistic assumptions about what he had seen and what it meant. A funny thing about the human brain is its ability to make sense out of things that don’t make sense. We all have, within our eyes, a spot where the retina meets our optic nerve. This patch of retina, called the scotoma, is effectively sightless, a big black spot in our field of vision. Yet we do not see a black spot; the brain fills in the blank with interpolated data to make the eye’s view of the world make sense. Our brain has the ability, throughout our lives, to fill in the blanks. It weighs, measures and processes the information it receives, so that what we think we see or hear or smell or taste conforms to its own rigid framework of previous experience.

Before my FO saw the smoke and flames, he had been sure that he was witnessing the normal activity of a crop duster climbing and descending in a turn. The problem is, of course, that not much crop dusting gets done in Colorado in November, and certainly not in the suburbs of a city. Rejecting this theory, his mind quickly rationalized again, like mine had. For a moment, he told me later, he thought that an optical illusion might have misled him about the size of the airplane. He thought that it might have been a model airplane. Only when the flames and smoke appeared in the distance did he become convinced that he had seen what he had seen.

We reported the event to the tower, and they took his name and personal information. They verified that a plane had crashed and that they had dispatched fire rescue trucks to the scene. There was little more we could do. It was a rather helpless feeling. As we watched the events unfold, my FO “talked through it,” as much to organize his own thoughts as to inform me. It appeared to him, he said, that the airplane had taken off from a nearby airport (the plane had actually departed from KCOS, where we were). The plane, he said, had climbed steeply and then, turning sharply, had fallen nearly straight down until it disappeared below the tree line.

Pilots, I assume, think about plane crashes differently than non-pilots. Everyone who hears about a crash thinks of the victims first. “Was anyone killed? Who was killed? Did they have families? Did they suffer?” These questions are asked with added emphasis in plane crashes, even though these accidents are exceedingly rare compared to car accidents. Pilots who hear about a crash want to know these same things, of course, but to a greater extent than non-pilots, they want to know: “Could this happen to me?” They want to know some more specific things, too, like: “Was this mechanical failure? Was it pilot error? Could it have been prevented?” And, finally: “Could I have prevented it if I were the pilot?”

Pilots read NTSB reports not out of unseemly curiosity but out of a genuine desire to learn. I cannot speak for all pilots, but I, for one, view these reports with a sober discomfort. The idea that a team of experts spends six months trying to figure out what the unfortunate pilot should have done in 12 seconds has always troubled me. Yet this careful, dispassionate chronicling of facts is what has made aviation as safe as it is today. When we study the terrible accident in Tenerife in our CRM (Crew Resource Management) class, it is not to establish blame or ridicule those pilots but to learn something from their unfortunate experience. Much of our SOP (Standard Operating Procedure) is informed by these reports. The enlightened addition of the ASAP (Aviation Safety Action Program) and NASA’s ASRS (Aviation Safety Reporting System) have likewise made flying safer.

There is something very different about witnessing an accident or being in the vicinity of one than just hearing about it. “Being there” activates what we former flight instructors know as the law of intensity. The day after the Colorado Springs accident, a corporate jet crashed in Akron, Ohio—a fiery crash into a housing development. Though the Ohio crash was a “bigger” accident, I will tell you that the accident I “witnessed” had a greater impact on me and lingered in my thoughts for much longer.

The news video of the Ohio crash was much more vivid and sensational than what I saw, from a distance, in Colorado Springs. Furthermore, the Ohio crash killed nine people and destroyed two houses and several cars. The Colorado Springs crash killed two people and, except for a small grass fire, damaged nothing on the ground. Still, I found myself searching for information about the victims (a 61-year-old man from Texas and his wife) and the airplane (a Cirrus SR22), and details about the crash. I didn’t do this for the Akron accident. I hadn’t done it for the 1,209 general aviation accidents in 2015. I hadn’t dwelled on the 376 fatalities in those accidents. I certainly didn’t do it for the 2,000-3,000 people who are killed every single month in the U.S. in car accidents.

I suppose, as Aldo Leopold has said, “Man brings all things to the test of himself.” His observation was with regard to lightning, but it may be an apt comparison. Two hundred sixty-seven people per year are struck by lightning in the United States. We have not quite made aircraft accidents that rare, but we are trying. They are rare enough that they capture our attention and our imagination.

Pilots are shaken by plane crashes because they are not abstract to us. Terrible things happen to people all over the earth every day. We might try to sympathize with the plight of others far away, but as Leopold also said, “We grieve for what we know.”
Maybe we also grieve for what we see. It would probably be too much for us to absorb and to make sense of all the pain and suffering in the world. Universal empathy would overwhelm our ability to cope. We study the reports. We learn what we can, and we try to move on. Does that make us terrible people? Perhaps it makes us human…and, hopefully, better pilots.