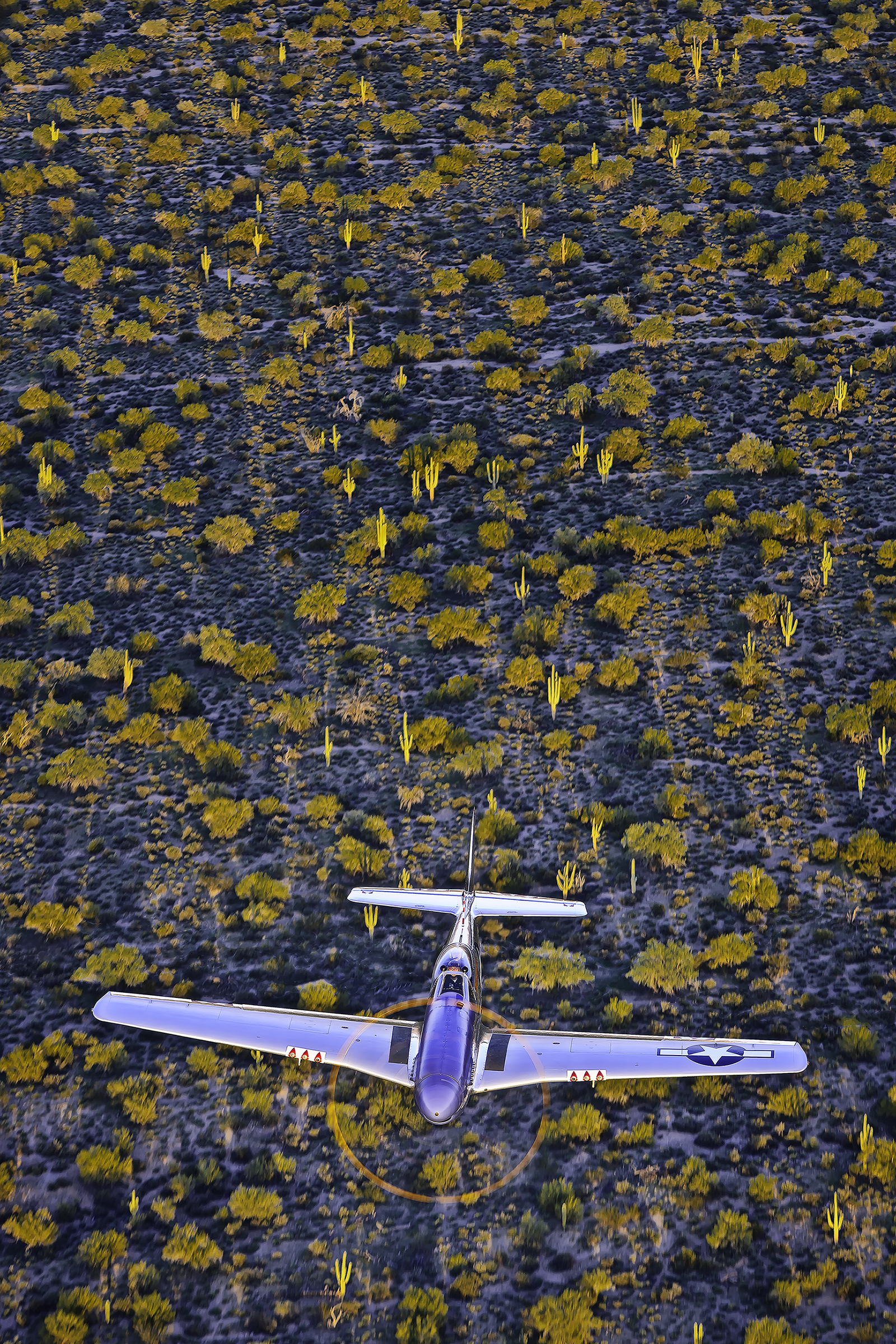 “I had been shooting landscapes with film using a Hasselblad V system until digital for black and white had overcome the main problems (b&w my passion). Satisfied with the conversions to b&w, I had re-equipped with Nikon digital equipment about 4 weeks before this shoot.
I started photographing aircraft when I was twelve years old. Living and growing up in SE London, a neighbor asked my parents if I would be interested in going to a Battle of Britain airshow at the old Biggin Hill Battle of Britain Station. I borrowed my father’s 35mm fixed lens camera and that was it!

This shot was taken on my first air-to-air mission. It was flown out of Falcon Field in Mesa, AZ flying around Red Mountain at sunset. Not only had I managed to master the difficulties of shooting at a slow shutter speed in order to get the prop circle but also the fact that if the photographers’ platform aircraft dipped, the momentum of the camera made the camera “shoot” up, but I had starting to make the compositions I wanted. This image of P-51 “Cripes A’ Mighty” was one of my favorite results.” 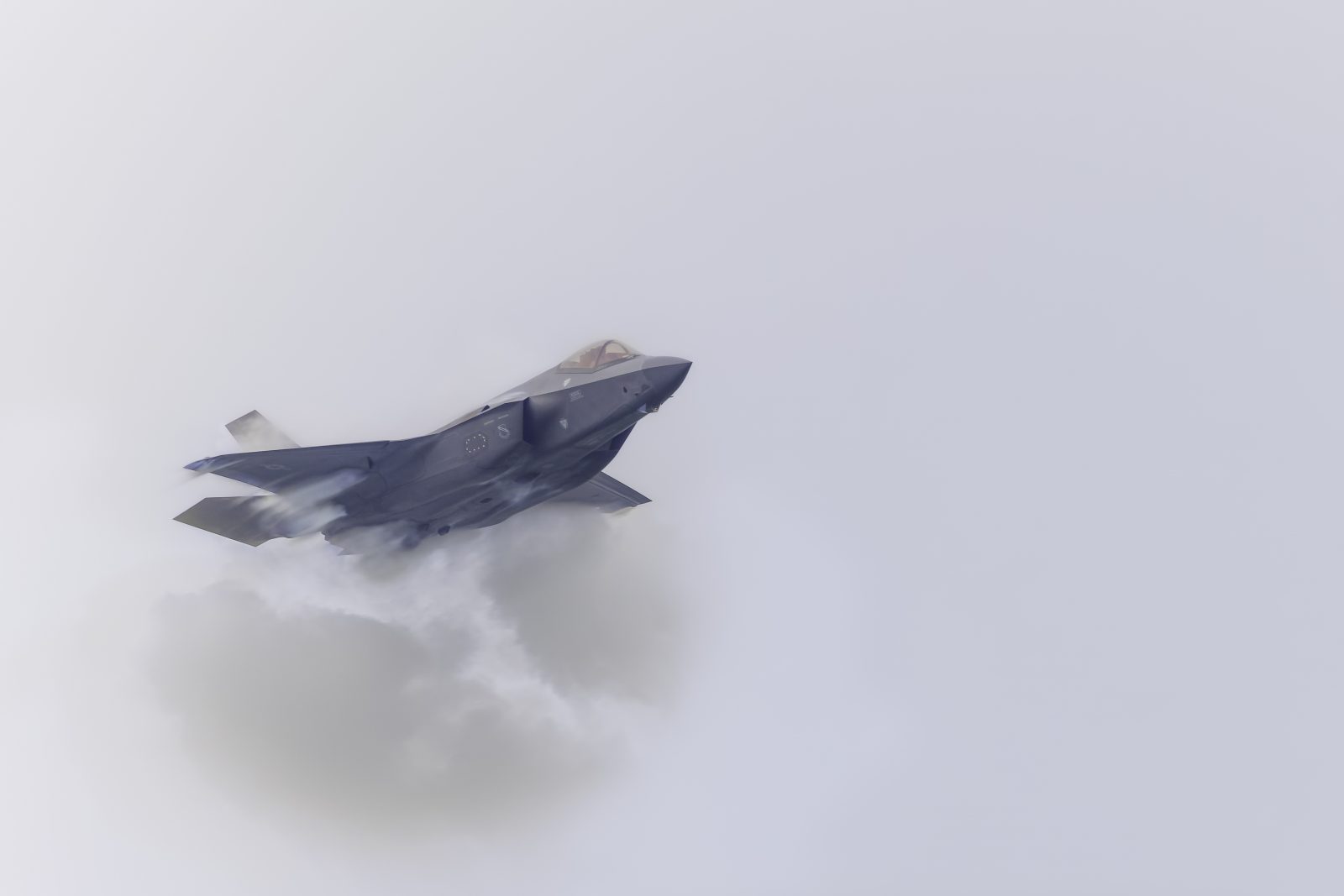 “Thunder Over Michigan airshow is held every summer at the Willow Run airport, providing tremendous photographic opportunities for vintage and state of the art aircraft. As usual, August 8th turned out to be one of the hottest days of the summer; the cloudy sky and high humidity was great for capturing contrails off the aircraft in flight. This was the first time I had viewed the USAF F-35A Lightning II stealth fighter in operation. I knew it would be fast and camera control would be critical. Since the F-35 demonstration occurred mid-morning, I was ready after experiencing some shots on other aircraft performing fly-bys.

The image was captured handheld using a Canon EOS R5 with the Canon EF 100-400mm f/4.5-5.6L IS II USM lens set at 400mm. I used manual camera settings of 1/2500sec and f/7.1 to capture the aircraft at high speed and used ISO 400 to obtain proper exposure. The F-35A emerged from a cloud bank out of a steep turn, passing left to right an estimated 1,800 feet in front of the airshow crowd. The continuous autofocus mode of the R5 camera allowed me to establish focus as it emerged from the clouds and hold it for several shots as as the F-35A passed. The roar of the Lightning II as it passed the crowds was akin to thunder from the clouds; hence the title “Thunder and Lightning”.

I was pleased by the contrails present along the wings and fuselage, and the darkened clouds directly behind and beneath the jet exhaust providing a nice contrast to the relatively grey flat sky. It really gives a feeling for the speed of the F-35A as it passed. The image was processed using DxO Pure Raw for noise reduction followed by Lightroom Classic for a small crop and to make minor adjustments to exposure, highlights/shadows, clarity and contrast.”

“This Shorts SD3-60 Sherpa, owned and operated by the U.S. Forest Service, based at the USFS Smoke Jumper base in McCall Idaho. My son is a pilot for the USFS and this is his airplane. We wanted a photo of his airplane, but not the usual snapshot. We also wanted to create a unique image that would help tell the story of this aircraft, and also the history of the smokejumper base in McCall Idaho. We decided to do a light painted image on the ramp in McCall and made certain to include the iconic base building in the photo.”

Have questions? Get in touch!

For questions about our contests, email [email protected]