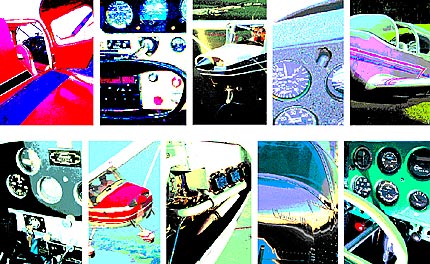 Affordable classics might seem an oxymoron, a contradiction in terms, but in fact, there are more of them available than you might imagine. Before we could home in on the top 10, however, we had to define exactly what we meant by “affordable” and “classic.”

We decided an affordable airplane was one with minimum maintenance that wouldn’t cost more than $30,000 to buy. That’s about what a person might spend for a sports car or boat, but not usually enough to break the family budget. While some purists might insist a classic airplane needs to fly in front of a tailwheel or behind a round engine, we chose the simpler definition that it merely be at least 40 years old.

Thus defined, the following are our nominations for the 10 most affordable classics in general aviation.

The Swift practically defines classic in that it was designed to look as much like a WWII fighter as possible. By the standards of the late ’40s, the retractable Globe was arguably the best-looking of the postwar two-seaters. With a typical Continental for power, the Swift wasn’t all that fast, probably a realistic 110 knots, and climb was little better than 600 fpm on a good day, but the airplane had quick ailerons, rapid pitch response and generally excellent handling. Never mind that it also was a squirrely taildragger to land, especially in any significant crosswind. Swifts represent the definitive classic postwar sportplane.

Despite their pudgy appearance and antiquated design, Stinsons of all varieties have always possessed a certain synergistic attraction. In the late ’40s, they were the most popular four-seaters in the sky, the Skyhawks of their era. Eddie Stinson produced some 5,300 of the type before selling the design to Piper, which built only a few before shutting down the line. (It did produce the Twin Stinson, however, as the Apache.) Stinsons boasted a good payload, along with 105-knot cruise and 850-fpm climb flying at a max gross of 2,400 pounds. Combine that with reasonable short-field performance and the Stinson 108 represents a definite best buy among classic singles.

As the immediate predecessor to the Skyhawk, the 170 was one of the gentlest tailwheel designs. A 2+2 rather than a full four-seater, the 170 was a popular family airplane in the late ’40s/early ’50s and helped Cessna wrest away top single sales honors from Piper. Cruise was typically only about 100 knots with the stock 145-hp Continental under the bonnet and climb rarely exceeded 650 fpm, but the airplane’s docile handling, simple maintenance and generally inexpensive operating cost ensured it a place in GA history.

A supposedly unstallable airplane designed by Fred Weick (later to work for Piper on the Cherokee), the Ercoupe represents the ultimate simple approach. There are no rudder pedals (though there are rudders interconnected to the ailerons), the gear and prop are fixed, and there aren’t even any cabin doors. The airplane was actually designed to operate as much like a car as possible. Contrary to the advice of so many instructors, you do steer an Ercoupe on the ground with the yoke and the brake is a single foot pedal. The first 85-hp models offered cruise slightly under 100 knots and climb at only 500 fpm, but stall was virtually nonexistent, a gentle mush toward the ground, making the Ercoupe one of the safest singles.

Guiseppe Bellanca designed some outstanding airplanes and the Cruisemaster was one of the best. A boxy, compact, wood-and-fabric family cruiser, the first Cruisemaster used a Lycoming O-435 for power and the result was a 157-knot cruise, not bad for only 190 hp. (Later versions installed the Cessna 182’s 230-hp Continental O-470.) Unlike the earlier Cruisair that used a manual, bicycle-chain gear system, the Cruisemaster employed hydraulics for retraction. The wood wing was an aerodynamic marvel, imparting a stall speed of only 38 knots, providing the Cruisemaster with one of the best ratios of stall to cruise in the industry.

In contrast to the later tri-geared Tri-Pacer (often referred to disparagingly as “The Flying Milkstool”), the earlier, conventional Pacer was generally regarded as a more graceful airplane. Fitted with 115, 125 or 135 hp, the Pacer could hold four in a pinch (literally) or two plus baggage more reasonably. While the Tri-Pacer was sometimes seen as ungainly, the Pacer was considered near the summit of Piper’s conventional-gear art. Even the 125-hp Pacers could race along at 100 knots with a full load, impressive performance for so little horsepower in 1950. Climb was a barely noticeable 500 fpm, but short-field performance was second only to the Super Cub.

Luscombe’s remarkable little ’40s vintage puddlejumper is, most of all, a joy to fly. In contrast to the nearly glacial control response of many of its competitors, the Luscombe takes to the sky with the enthusiasm of a three-month-old puppy. There’s plenty of adverse yaw to remind you this is an old airplane and you need to keep the rudder pedals moving, and cruise is only about 85 knots (with the 90-hp engine), but few pilots complain in view of the airplane’s happy maneuverability. Best of all, a mere $25,000 usually will buy you a jewel.

8Though most pilots think of the Skyhawk as a modern airplane, the basic design dates back to the mid-’50s. Born with a straight tail and fastback fuselage, the first 172s were little more than 170s with a nosewheel. Accordingly, they made do with the earlier model’s 145-hp Continental engine. Climb was listed as 660 fpm, and even that was optimistic. Drag wasn’t much of a concern in those days and, accordingly, early 172s weren’t very quick (108 knots). No one seemed to mind, as the Skyhawk’s combination of economy and utility would make it the most successful civilian airplane the world has ever seen.

Piper’s mini-four-seater 140 represents one of the newest classics in our survey, a 1964 model exactly 40 years old. In fact, 140s all the way up to 1975 fall within our $30,000 guideline. Cherokee 140s were so easy-flying that some instructors criticized the type as too gentle. Stalls were total non-events in any power/flap configuration, 45 knots at the absolute bottom of the envelope. Cruise was 113 knots with the typical 150-hp engine (don’t ask) and service ceiling was only a little over 14,000 feet. Still, the 140 was one of Piper’s best-selling airplanes and it served as a template for many future models.

The Skyhawk’s little brother, perhaps the world’s most famous trainer, premiered in 1956 and was produced in essentially the same form through 1985 (though with 10 more hp and Lycoming power on later models). The 150 was an elegant little airplane with plenty of wing (157 square feet) that imparted good climb for the horsepower. In cruise mode, 150s managed 100 knots on a good day for those student cross countries. The narrow cockpit accommodated two folks grudgingly, but the delicate Cessna 150 was tougher than it looked, a strong machine to withstand the abuse of fledgling aviators.

Runners-Up:
While the following five candidates didn’t make it into our top-10 list of classics, we believe they deserve honorable mention. You’ll note that one is a two-seater, the rest are four-seat retractables and one is a waterbird.

PIPER J-3 CUB. Out of production for more than half a century, it remains a favorite of airplane enthusiasts who prefer basic stick-and-rudder flying. Many of the 14,125 Piper Cubs built since 1947 are still in service and their popularity has kept the resale value high. Sixty-five horsepower gives a 65-knot cruise, but the airplane is so much fun to fly that you can almost feel its tailwheel wagging.

BEECH 35 BONANZA. Walter Beech’s remarkable V-tail airplane was a revelation when it first appeared in 1947. Flying behind 165 continuous horsepower, the four-seat Bonanza outhandled everything else in its class and offered an easy 150 knots cruise, nearly the equal of the contemporary DC-3 airliner. The Bonanza also established a tradition of arguably flawed excellence that was to last for nearly 40 years.

NAVION 225. Believe it or not, the first North American Navions were styled after the P-51 Mustang, complete with a sliding hatch and legendary structural integrity. One slight difference was accommodation for four people. Subsequent models were produced by several other companies—Alon, Janox—and featured more horsepower (as much as 285), comparatively huge cabins and conventional passenger doors, but climb was poor with a full load and cruise rarely exceeded 135 knots.

PIPER COMANCHE 180. Piper’s first entry into the retractable market was the Comanche. The initial offering came in your choice of 180 or 250 hp, and was noted for a big cabin and 140- and 155-knot cruise, respectively. When fitted with the optional 90-gallon tanks, the Comanche 180 sported as much as nine hours’ endurance.

LAKE LA-4. A Lake Amphibian might seem an odd choice as a classic, but the early ’60s LA-4s sell today for less than $40,000. Those first LA-4s weren’t especially fast (110 knots) or roomy, and the back seat was mostly an afterthought, but they were the only airplanes in the four-seat retractable class capable of making more than one water landing.