Much of aviation changes slowly, if at all. After all, the most popular models in today’s fleet were built 40 or more years ago. It was nearly twice that long ago that the regulatory framework that governs light aviation was riveted in place. But thankfully, since then some things have changed for the better, and headsets are one of them.

It hasn’t always been that way. Many of our readers, myself included, began flying before headset use was encouraged. It wasn’t that anyone was ignorant of the risks, just that widespread use of headsets wasn’t yet a thing. Luckily, though, a couple of pioneers saw the future and dedicated themselves to building headsets that were light enough and comfortable enough to wear for long stretches. Today headsets are more than a curious pilot accessory. They are a preflight checklist item, and not just for the pilot but for everyone on board.

To get there from the earliest headsets, which dispensed as much pain as they did reduce noise, took some time and some doing. The chief advances were the introduction and use of better, more durable, quieter and more form-fitting cushioning materials for both the ear cups and the headband. The design of the headset structure, from headband to ear cups, has advanced in similar, often less-dramatic ways, though a few, including a couple we review here, use a headband design, a steel arch that sits atop the head with pads attached to each end, that is strong and durable but not particularly comfortable.

Today’s headsets cut noise in a variety of ways, though the most popular ones use a combination of passive and active noise attenuation, which you can mimic by sticking your ears with your fingers, as most of us do when a particularly loud plane pulls up to the front of the FBO ramp.

The other major advancement in comfort and noise reduction was the introduction more than 25 years ago of active noise-canceling technology, which electronically cuts down on the noise in the outside environment.

Regardless of how it is done, cutting down on noise is critical to pilot health…and performance. Stress and distraction are far more likely to compromise a pilot in a noisy environment. A good headset is a piece of safety equipment, and today’s pilots get that.

It goes beyond safety, as well. We can’t stress enough the importance of wearing a good headset every time you switch on the mags. General aviation aircraft, especially piston singles and even those that are considered quieter than most, are way too loud for your ears. The Occupational Safety and Health Administration (OSHA) says that damage to your hearing will result from long-term exposure to levels above around 85 dBs For reference, a typical noise level in a legacy Cessna Skylane is around 92 dbs. So while few headset makers discuss the noise reduction specs behind their headsets, you can safely assume that every model in our lineup, if worn correctly, will cut noise to well below that OSHA reference point, which is any headset’s most important function.

The other big advances in headset design are in the realm of connectivity. Most of today’s models, even budget ones, can connect to your phone or tablet wirelessly.

The headsets in our roundup are of three basic designs, over the ear, on the ear and in the ear. For most light plane flying, the on-the-ear designs are not quiet enough, but for some, not all, twins and light jets, they are just right. So keep that in mind as you peruse our lineup, and be sure to match your mission with the right model. 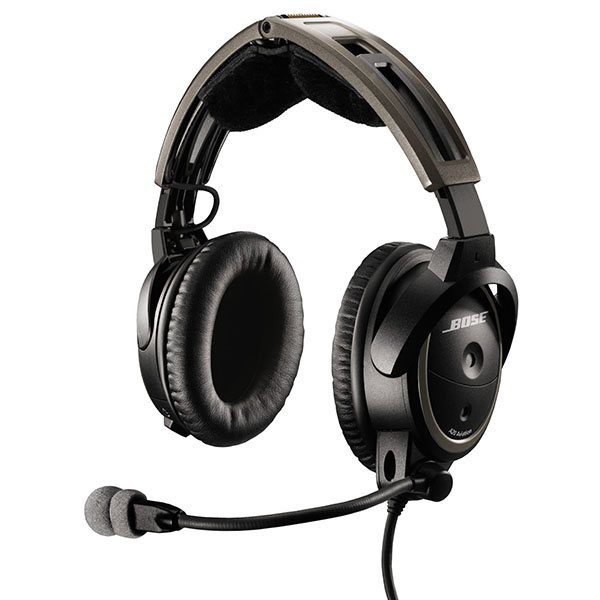 It’s hard to believe, but the bestselling Bose headset has been around for more than 10 years now, with pilots like us loving it and flying with it, a lot. And remember that the A20 replaced a headset, the Aviation Headset X, that was a decade-long industry leader in its own right. Back then, some observers were saying the current product was long in the tooth; despite that, it remained the top-selling aviation headset right up until it was superseded by the new kid in town. And despite the headset’s continued hot sales, Bose did come out with a new model, the A20, which captured all the mojo of its successor and then some, quickly becoming the premier headset in the market, despite some impressive competition. So is Bose coming out with another new aviation headset for light plane flyers soon? We don’t know, but whether it does or doesn’t, the A20—light, supremely comfortable for hours at a time, and with great sound both coming and going—remains a formidable presence in the market as the most coveted model.