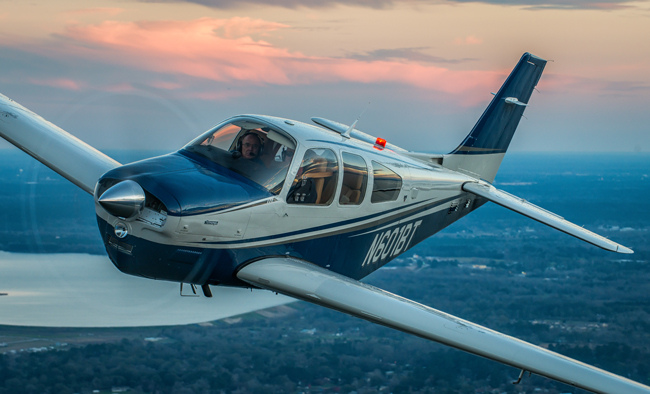 The straight-tailed Bonanza is one of every aviator’s favorite airplanes. Bonanzas offer a certain smoothness of response, an almost indefinable coherence between pilot and airframe rather than simply tactile communication with stick and rudder.

The first Beech model 33s premiered in 1960 with a standard, three-member tail, a 225 hp Continental under the cowl and the model designation of Debonair. Initially billed as an economy version of the V-tail, model 33 was virtually identical to Beechcraft’s model 35 V-tail Bonanza from the firewall aft and the tail forward. In fact, Beech offered the Debonair as an alternative to the controversial V-tail model.

Pilots eager to own a Bonanza now had a substitute for the model 35 that had suffered 250 inflight breakups at a rate that turned out to be 24 times higher than that of the straight-tail model.

In fairness, the butterfly-tailed Bonanza’s tail separation problems were finally addressed with an emergency AD note in 1987, and I know of only-two tail failures since then (see the NASA/University of Texas study of V-tail Bonanzas).

Beech upgraded the Debonair to the same 285 hp engine as the model 35 in 1966 and eventually granted the straight-tail airplane the status of Bonanza. The company also grudgingly acknowledged that there were no real performance differences between the V-tail and straight-tail models.

The E/F33A were introduced in the mid-1960s, and like the V-tail, cruised at 172  knots following a climb at nearly 1,200 fpm. Beech’s E/F33A cruised most efficiently at 6,000 to 9,000 feet, though they did suffer from short range because of their 74-gallon fuel capacity. Four hours was the airplane’s typical endurance at max cruise, worth 700 nm between fuel stops.

The last V35B was discontinued in 1982, and the F33A, last of the four-seat Bonanzas, was dropped from the line in 1994, leaving only the six-place A36 Bonanza in production. The A36 is a great machine, but you do pay for every bucket that’s installed, no matter how many are occupied.

Owners of F33As complain about high-maintenance costs and parts prices, but Beech still supports the airplane and parts are usually available. The F33A nevertheless represents an excellent buy for the pilot with $100,000 to spend.