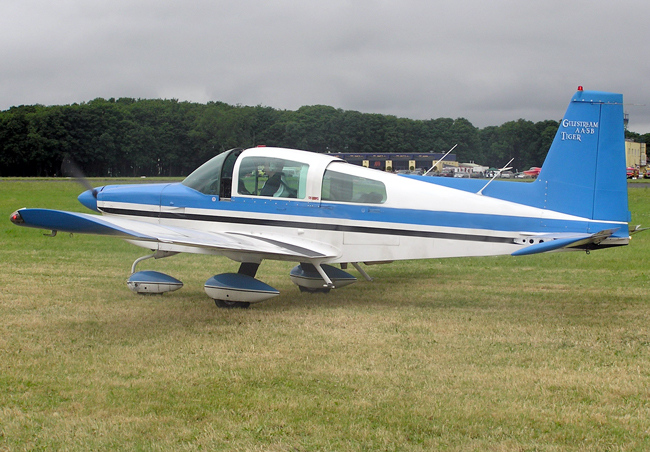 It seems anything Roy LoPresti touched was automatically a work of art. LoPresti transformed the stodgy GA Traveller into the Tiger with a series of much needed aerodynamic modifications, mostly by hanging a carbureted, 180 hp Lycoming O-360 on the nose.

LoPresti also boosted fuel from 38 to 52 gallons, made a few cosmetic changes and wound up with a carefree, fixed-gear/fixed-prop flying machine capable of 135 knots cruise on only 180 hp.

LoPresti redefined “sporty” with the sliding-hatch Tiger. The nosewheel was full-castoring, so all directional control on the ground was with asymmetric braking, allowing 180-degree reversals in the airplane’s wingspan.

If it wasn’t raining, you could taxi with the hatch all the way back for maximum cooling. You could even leave it open a few inches in flight or more.

Back in the ’70s, I flew at least 50 air-to-air sessions, flying echelon on a Tiger photo ship with the hatch full back. The hatch remained solid as a rock throughout. The AA5B made a great photo ship as long as you held position slightly above the leader’s wing.

Tigers were tough birds in other respects, as well. The main wing spar was a steel tube that ran from wingtip to wingtip. Wing skins were bonded rather than riveted in place, one reason why the AA5B is so aerodynamically efficient. A downside was that field repair was a challenge if the aircraft was damaged.

The little Grumman featured the quickest ailerons of any non-aerobatic, certified single on the market. I have it on good authority that the AA5B was capable of a beautiful barrel roll when no one was looking (or even if they were).

Your first flight in a Tiger will convince you of its true nature. It’s as playful as a Malamute pup, though it won’t lick your face. For pilots whose tastes run more toward fun than utility, it’s tough to beat a Tiger.