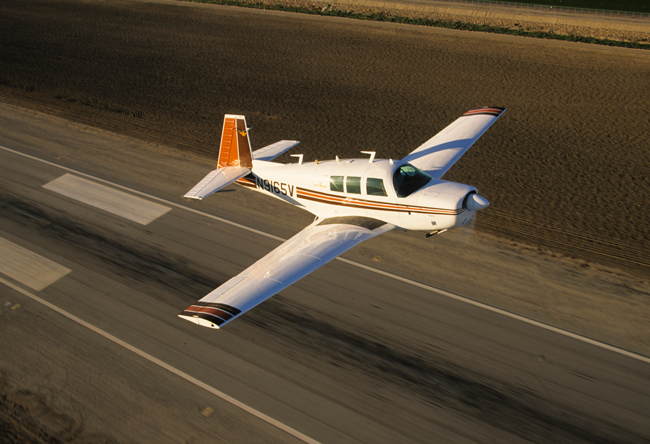 It seems Mooneys are forever. The first semi-four-seat Mooneys date back to the ’50s, and the little speed freaks could step along at 145 knots on about 9.5 gph. Those first, short-cabin airplanes were constructed with wood wings and empennage, but Mooney modernized the airplane to all-metal construction in 1961. The company soldiered on to become builders of the world’s most popular four-seat retractables until the advent of the Arrow in 1967.

To minimize system complexity, Al Mooney subscribed to the KISS principle (Keep It Simple, Stupid). The vertical stabilizer was a stubborn, perfectly erect design, a feature that was to become a Mooney signature to the present day.

Rather than use draggy trim tabs, Mr. Mooney mounted the tail on a giant jackscrew that swivels the entire empennage up and down to trim pitch. The baggage compartment door behind the cabin was mounted tall, with the bottom lip about waist high, probably to avoid cutting through a structural longeron that runs horizontally below the door.

Mooney also designed an unusual, manual gear system for the original airplanes. The bicep-powered, Johnson-bar gear retraction system is unique, as it’s the only extension device ever certified by the FAA without a backup system. It’s also probably the world’s fastest mechanism for putting the wheels to bed. In the hands of an experienced Mooniac, the landing gear can be retracted so quickly, it seems to practically disappear.

Mooney fitted his four-seat models with a Britain Industries, full-time, wing leveler called Positive Control. PC was on anytime the engine was running, automatically leveling the wings unless the pilot depressed a button on the yoke. PC was almost universally regarded as a nuisance, and many pilots chose to override the system by wrapping duct tape around the button on the left ram’s horn, locking out the wing leveler completely.

Our best buy Mooney was the 200 hp Executive M20F that came along in the mid-1960s. Unlike the earlier 180 hp M20C Ranger, the M20F was closer to a true four-seater, stretched 10 inches (five inches forward and five inches aft of the wing), specifically to benefit those relegated to the rear compartment.

In keeping with its image as the world’s most efficient, true, four-seat production retractable, the Executive offers an impressive 155 knots on 10.8 gph. That’s meaningful economy in this day of $4 to $5/gallon avgas.

Most of the Executives featured electric gear, and Mooney adopted a system that was nearly as fast as the manual mechanism—three seconds up, two seconds down. The airplane also manifested a control harmony facilitated by rods rather than cables. This imparted a direct coupling to ailerons, elevator and rudder. The result was an unusual synchronicity that created the illusion of quick control response. In fact, the Mooney’s ailerons weren’t that fast, about 60 degrees a second, but roll and pitch seemed quicker.

The airplane wasn’t universally loved by mechanics. Interior dimensions weren’t that bad, but systems were crammed into tight spaces, and seemingly everything in the wings was protected by an inspection plate.

The later LoPresti-improved model 201 had 17 major drag-reducing improvements that boosted cruise by 14 knots without a power increase. For that very reason, the first 201 sells for about 17 percent more than the last of the Executives, making the M20F a definite best buy.

The Executive won its place on our best buy list because of its overall economy, reputation for reasonable system integrity and good comfort for two plus two, all at the price of a good, used XKE roadster or older Ferrari.