Why was I doing flying a single seat Extra at 1000’ above the ground, alone, over a country that has a “shoot to kill” policy for unidentified aircraft, and was not talking to anyone? I had to ask myself. In moments like this you can’t get let yourself mired in the meaning of the moment or you might do something reactive or emotional. You have to stay focused on the horizon and keep moving forward toward the light.

It all started on my way to California for 2011 fire season. I was flying my Extra, so it made sense to accept an invitation to fly an airshow “along the way” in Honduras, a 1,000-mile detour each way from Brownsville, Texas. I would drop down into Honduras for the weekend via Mexico and Guatemala, fly the show at San Pedro Sula (MHLM), then fly back to Texas and continue on to the west coast. My crew chief, Tim Fowler, met me in Brownsville (KBRO) where we joined another performer and his chase plane then flew south together in loose formation. 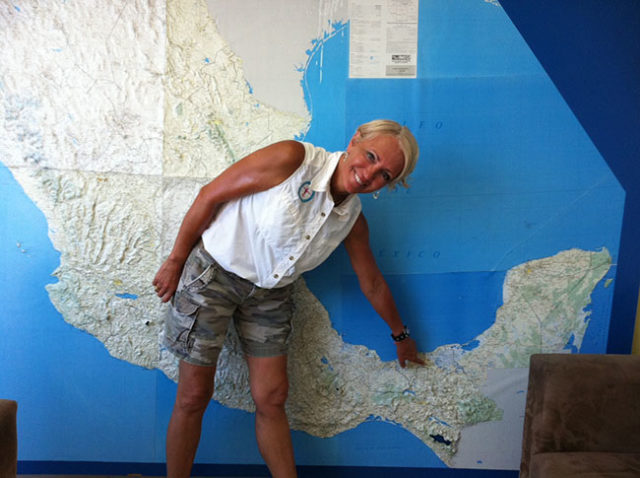 The flight to Honduras is easily doable in one day if you have the range–which our aerobatic airplanes don’t–so stopping for fuel every couple hours means running out of daylight and an overnight stop in Mexico. Flying in Mexico isn’t difficult, but does require some paperwork. Before leaving the US you have to register for eAPIS, the Customs and Border Protection Electronic Advance Passenger Information System, and file an International Flight Plan. Once in Mexico flight plans have to be filed at every fuel stop, and you basically go through immigration and customs each time you land. Everyone is friendly and helpful, but each stop takes about two hours because of all the paperwork and payment of fees (which are not excessive). After landing at Tampico and Vera Cruz then dodging some rain showers along the gulf coast, we decided that Villahermosa (MMVA) would be a good place to stop for the night.

After clearing the requisite Customs and the stony-eyed young man with a large dog, we were met by the jovial airport manage who arranged for hangar space. Leaving for our hotel I waved and said “If we don’t see you in the morning, we will see you Monday on our way back through,” (thought bubble: this is going to be such an easy trip). But, “Oh Noooo…,” the Manager said, “This border has closed and there are now only two airports of entry – Tapachula and Cozumel.” This was a situation of major significance. I would be adding hundreds if not thousands of miles to my trip and many hours, possibly days. Neither option was desirable. Tapachula to the West meant flying over some of the most rugged mountains in Central America; Cozumel to the east was a sea level flight, but would take me almost back to my starting point.

I was in a state of denial taking off the next morning for Honduras – what else can you do? We flew over beautiful Guatemala’s it’s jungles, reserves and ancient ruins that spill out to the Caribbean Sea that would lead us into Honduras and San Pedro Sula. MHLM is a fairly large international airport. We taxied to the Honduran Air Force ramp, where we based for the weekend, and were met by our local hosts who were hospitable and friendly aviators and enthusiasts. The hotel was nice and while we were instructed not to leave the hotel proper, we were escorted by an armed guard whenever we went out somewhere to dinner or back to the airport. A representative from the US Embassy, who was there for the airshow, said “Welcome to the murder capital of the World.” But I never felt like we were in danger, likely because we weren’t targets of the gang violence that a lot of the locals are.

The airshow took place on one runway while commercial airliners operated off the other. There was no conflict with them, but there was an unanticipated lack of security because of the large crowds that showed up to the party. The lack of snow fencing and crowd control was understandable because the Honduran Air Force doesn’t host an airshow every year, and luckily my intrepid crew, Tim Fowler and Denise Decker, rose to the occasion. Dripping in sweat because of the heat and humidity, they provided crowd control whenever we started turning props. During my inverted ribbon cut, the crowd surged onto the taxiway, which was in direct line of sight for the ribbons, but we got the job done. All in all, it was a fun weekend. But on Sunday I had to make a decision on which direction to go when the show was over – east or west.

To the west, Tapachula (MMTP), on the southern coast of Mexico, is a notoriously bad fuel stop. The last time I’d stopped there on the way from El Salvador, I had to appear before an unexpected Military tribunal. The soldiers were armed with weapons, dogs and video cameras, and asked me a slew of questions for over an hour while I sat at a long table in front of them. The most surreal part of the experience was the “customer satisfaction” survey I was given at the end of the interrogation asking me to rate the experience on a scale of 1 – 10. Were the interrogators polite? Hospitable? What it a good experience? Rating an armed soldier with beady eyes in a foreign country seemed precarious, so of course I answered everything with a solid thumbs up and a perfect 10. I wasn’t looking forward to that experience again and also, heading East would mean flying alone over rugged mountains in marginal weather with nowhere to land. The decision was easy and it was a clear “no-go” for me.

Cozumel (MMCZ) was the obvious path of least resistance. 300 NM direct over the Caribbean Sea, and about 350 NM if you hug the coast by Guatemala and fly over Belize. I discussed the options with the performer I’d flown with to Honduras, and we agreed to fly together, but I made it clear I was not going directly over the water and that I would only fly close to land. A lot of performers I know do fly over open ocean to get to airshows, but I don’t. You can’t safely ditch a small aerobatic airplane and I like to have everything stacked in my favor before I take off. Maybe I’m a chicken, but I don’t like stress or limited options for survival

“San Pedro Tower, Flight of Three, direct to Cozumel, ready for takeoff”. Even though the second airplane would be in the lead, I was handling the radios. The Tower called back with an approach frequency and a transponder code and we took off with a 1500’ broken layer of clouds and scattered rain showers, with good visibility so it was fine for a sea-level flight. This was going to be a piece of cake, I thought, but a few miles out, in a rather confusing move, my leader decided to go direct and headed out to sea saying he had to conserve fuel. This was non-negotiable for me, so I said “Adios” and took a hard left turn.

Flying toward the Guatemalan coast, I wasn’t concerned because I was in contact with San Pedro Sula Approach Control, but before I could explain my flight path diversion the ceilings dropped to 1000’ and I lost radio contact, which also meant they couldn’t see my transponder flash. I continued flying, hugging the coast, when it occurred to me that I was now an unidentified aircraft flying in hostile territory. Due to drug trafficking, it was legal for Guatemala to shoot down unidentified aircraft on sight. I didn’t seriously believe the Guatemalan authorities would really shoot me down, but what did I know? Maybe I was being naïve because stranger things have happened. It was a tense situation and when I finally crossed the border into Belize I laughed and gave myself a high five. By Belize City I was able to reestablish radio contact and they were clearly relieved because they had been trying to contact me since I took off.

As Cozumel came into sight, I was almost back to where I had started the journey and I still had to get the airplane to California. I could fly to Texas but that meant a long cruise over Campeche Bay and more marginal weather and I’d had just about enough fun for one weekend. I remembered Freddy Cabanas’, a legendary Key West Pilot and good friend who we tragically lost in 2013, had offered to ferry my airplane to or from MMCZ should I ever need it. So I called Fred and he said he’d be over in two days to retrieve my airplane. His son Raymond then ferried it to California for me. I found a nice hotel, had a big bowl of Guacamole and then flew out the next day on United.

Don’t let this discourage you from flying south. Instead I encourage it as a great way to use your airplane. Do your research. Be flexible. Rules change, and airports of entry can change. It is not always easy to get information ahead of time. The best source for up to date information I’ve found is: Bush Pilots International (formerly Baja Bush Pilots): www.bushpilotsinternational.com. Foreflight has a worldwide database with up to date weather reporting. The medium size and larger Airports are safe and often guarded by the military so it’s usually fine to leave your airplane unattended outside at night. Fees are not excessive and fuel is reasonable. Better still, install tip tanks if you can, and keep flying south. It’s always another adventure.